I’ll pick a different first name for my character (Yae - Yao can probably lead to confusion).

I’m curious if they encountered each other in their respective Syndicate days.

Oops! My apologies… I didn’t even think to check out other names. Sorry about that.

While it’s a big galaxy, it’s altogether possible they ran into each other in the past. We can certainly play on that in the context of how they ended up on the same crew, too.

I was logging in to request that somebody changed their first name to take it easy on the name handicapped GM. I will also note that I love the idea of you guys knowing each other beforehand.

In fact, if you guys are in some way shape or form actually kind of close, being yae and yao would actually be sort of cool… Hmm.

While it’s a big galaxy, it’s altogether possible they ran into each other in the past. We can certainly play on that in the context of how they ended up on the same crew, too.

Mmm, the “how they met” flashback. I love those scenes.

Mmm, the “how they met ” flashback.

Okay, that clip gives me an inspiration (when time permits) (though it should wait for a moment that will help in some case, no?)

I can’t help but imagine this scenario when thinking about a bounty hunter rival and someone like Monster.

Okay, that clip gives me an inspiration (when time permits) (though it should wait for a moment that will help in some case, no?)

Typically the flashbacks are used to explain how you prepared ahead of time for the thing that just happened during the job, so it’s usually a more nearby flashback, but that doesn’t mean you can’t use a flashback to instead explaining how you’re prepared for this eventuality due to something to happen far in your past.

I’m going to start fleshing out a bit my Cast of NPC Characters (“Deadly Friends”), comment-by-comment (to allow for some linking from the Master Character List).

“Monster! Always good to see you walk in my door. Buying or selling today?”

“Friend Shod! Selling, yes?” Monster puts down the large crate on the floor with a rattling thud.

“Funny, ever since I known you, back in the gang, you always seem to have a lotta weapons to sell.”

Yae smiles, teeth gleaming. “You know how things turn out. Lots of former owners not having use for them any more. Or maybe not until out of rehab. Waste not, want not, yes?”

Shod is an older, bald human, a former Syndicate muscle and weapons expert who bought out his Syndic membership by becoming a weapons dealer. Shod has a relatively legitimate (or at least bribe-protected) weapons shop, both new, used, and pawned. He also does some more large quantity deals for trusted customers, both buying and selling. 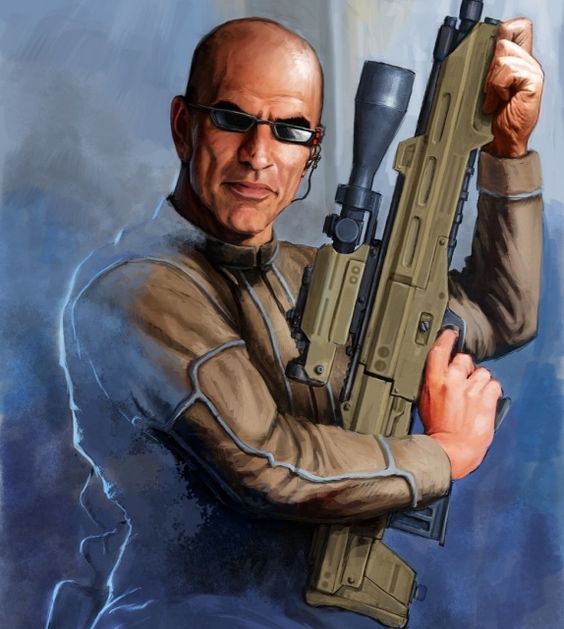 “Dammit, Yae,” he screams. “I’m trying to kill you! Stop enjoying this!”

The xeno’s grimace turns upward slightly into a broad grin. “No!”

Chon-zek stomps his foot. “See!? This is exactly why I’m trying to kill you!”

Chon-zek is a human bounty hunter, from a family with long Syndicate ties. Slight of build, highly professional in demeanor (aside from his Ahab-like obsession with Yae), dressed well and well-equipped with weapons and defenses. His pride is usually his weakness.

She looks up from her table in the café. “Crap. You I need in my port like a third arm.”

“I fight just fine.” She raises an eyebrow. “There’s still a warrant on you since that brawl at Kilamahali.”

“You folded him in half, Monster. The wrong way.”

“He did have knife.”

“Or … could take this,” he says, grinning, tossing the credit stick to her.

She catches it deftly, gives it a glance. “Or, yes.”

“Double or nothing for one throw?”

“I know you, xeno. You’re not talking about dice. Either way, the answer’s no. I like my money, and my spine.”

Monster sighs. “Ah, well. Must find other entertainment, then.”

She takes a drink of short beer, then cocks an eyebrow. “There is a drug gang hanging these days at the Happy Barrel.”

He shrugs. “Eaten there. Not impressed. And don’t use drugs. Kills taste buds.”

“I’d consider it a favor if the gang members got, um, folded up, too.”

That perks him up. “Weeellllll, for old friend …”

“Just … don’t mention my name while you’re doing it.”

“Am model of strong, silent type. Maybe you return favor …?”

Then she goes back to her beer.

Yazu is a female police detective, casually crooked but not a bad person for all that. She’s interested in keeping the peace (fewer headaches that way), but not above supplementing her income along the way. 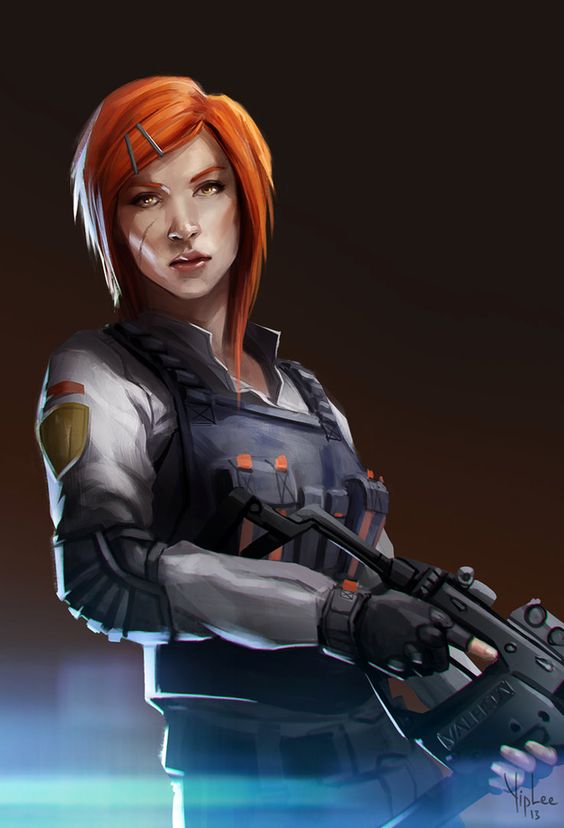 A few years ago …

“Love spending time with you, Aya, so yes, of course. Xenos, in humanspace Syndicate … of course are stick together, but enjoying it.”

“I think they were talking about other sorts of ‘sticking together’.”

“What, like breeding lovers?” Twigs cocks his head. “Do not think that is biologically possible with you.”

“Have seen what they do for breeding? Seems very … unsanitary.”

“And all of it for only a handful of offspring at a time. Wasteful.”

Yae raises an eyebrow. “Anyway. am glad not every race as obsessed with breeding exercises as humans.”

They sit in frustrated silence for a while.

At length, Aya reaches over, lifts a rocket, and slides it across the matrixboard. “Threat. Win in four moves.”

Aya is a female xeno, a bipedal insectile form, though she nearly always wears a full body environmental suit / armor, a distinctive red in default color (though it has camo circuits all the way to Predator-style “invisible”).

She and Yae struck up a friendship in the Syndicate back in the human Core Worlds, and still do each other favors from time to time. 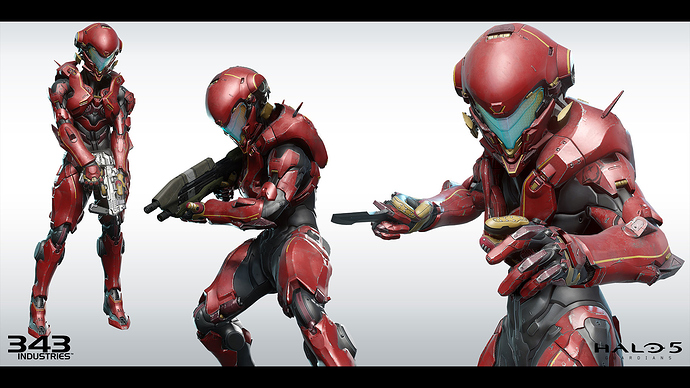 [Yes, the pistol is one of the “Deadly Friends”]

Yae makes a face, but finally sighs. “Yes. But usually when is realized, are some guns scattered on ground.”

“You can’t just trust any weapon you pick up, idiot, especially if it’s ended up on the ground because of you.” She makes what might be a disapproving clucking, or perhaps a less human utterance. “Fine. Take this.” She pulls a weapon – slowly – from a holster from her lower thigh, and hands him a worn but quite serviceable blaster. “Buckdot HH47, a Mark 83. Reliable, powerful, deadly.” She makes another noise, probably laughter. "Sort of like you.”

“You turn head.” He takes the pistol, professionally checks the charge, the blast chamber, hefts it in each hand, pulls out the pack and grounds the chamber out, then takes a couple of dry shots at the floor before reloading. “Looks nice.”

She whuffs, an odd sound through the helmet’s mic. “It is nice. Hard to find any left these days, since Buckdot chose the losing side in the Ascension Wars. Promise me you won’t lose it.”

Krieger is a large hand blaster pistol, matte gray (as though any finish has been stripped off), showing the wear of a weapon that has seen regular use (and regular care). Monster carries it on a right thigh holster. Sometimes he even remembers to use it.

[Yes, the pistol is one of the “Deadly Friends”]

This has such an interesting effect. Because having a friend help you with something is +1d, the blaster is effectively fine quality. If it also has the fine quality (can’t remember), that means you get +2d then using it.

It’s more dice all the way down.

If it also has the fine quality (can’t remember), that means you get +2d then using it.

The PDF I bought says it increases effect if it’s fine equipment, but not that it gives bonus dice. Can you reduce effect for dice?

The PDF I bought says it increases effect if it’s fine equipment, but not that it gives bonus dice. Can you reduce effect for dice?

Nope, looks like I was wrong and referencing an older version of the game. The issues you run into when you’ve been following a game since pre-production.

Huh. So… because it’s “fine” I get increased effect, and because it’s a “friend” I get +1d? That might make Monster more likely to use it. (Or does the +1d only come up if I’ve made it my Bestest Friend from the list?)

Or does the +1d only come up if I’ve made it my Bestest Friend from the list?

I’ll have to double check when I get home, but I believe it just counts as Assistance (for the bonus die) when an NPC helps you with something. Having someone as your closest friend just means they are more willing to put up with your shit.

Edit: Well, I might not know this game as well as I thought I did. This was the only instance I could find of friends and contacts adding dice.

For any downtime activity, take +1d to the roll if a friend or contact helps you.

“I’m spending my downtime engaging in stickups and armed robbery. I get +1d for having my blaster along.” “… Okay, that sounds legit.”