No session, so here comes a hopefully entertaining diversion instead! 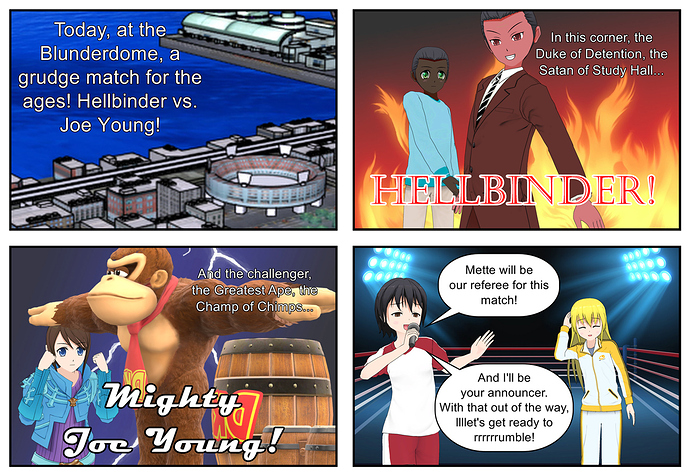 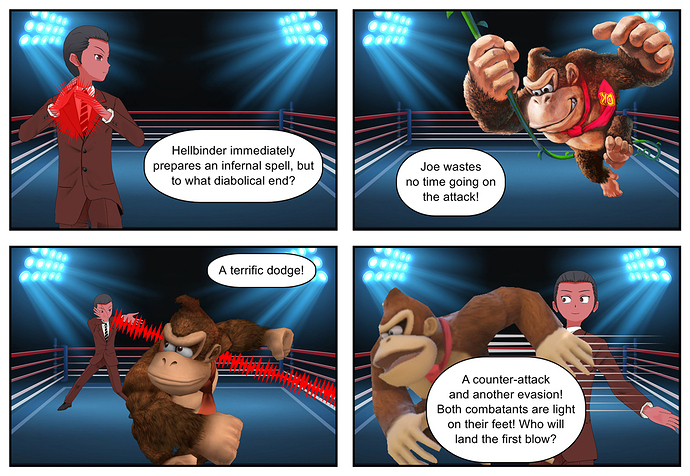 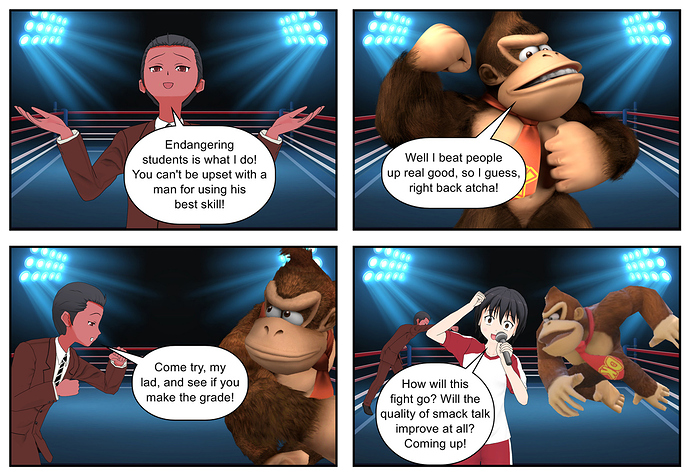 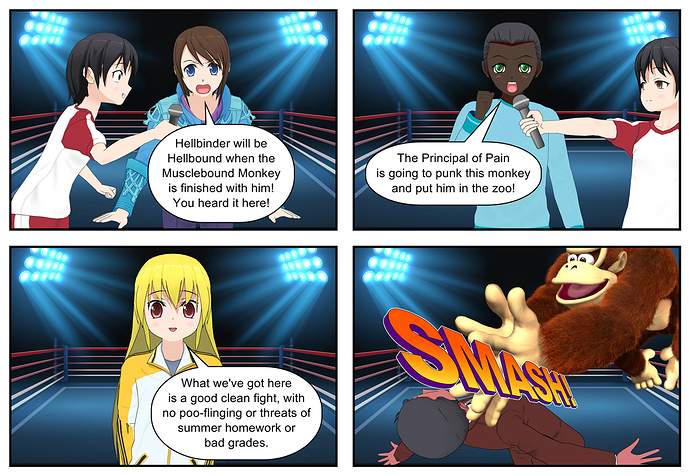 Kiln is cast as Joe’s manager, with the Rival Roddy acting as Hellbinder’s promoter. I’m no good at smack talk unfortunately.

Rather than resolve this duel in comic form, I thought I’d engage in a shocking swerve and do it with World Wide Wrestling.

Who are our contenders?

Mighty Joe Young is a Monster. Hailing from “Darkest Africa”, the sinister simian has a Thunderous and Impressive Entrance. His stats are Look +1, Power +2, Real -2, Work -1. As a hero, his role is the Babyface. He gains 1 heat with Hellbinder for answering the question “who can stand up to me in the ring?”

Aside from “Finishing Move”, his starting moves are “Intimidating” (when not in the ring, roll +Power instead of +Look) and “Will you look at that size!” (gaining +1 Power, accounted for in the stat line above). His Audience starts at +1.

Hellbinder is a Veteran. Hailing from the depths of Hell (Toronto, Ontario, Canada), his entrance is Iconic Symbolism: the red flames of hell itself! His stats are Look +1, Power -1, Real -1, Work +1. As a villain, his role is the Heel. He gains 1 Heat from Joe for answering the question “who has no respect for all the work I’ve put into this company?”

Aside from “Finishing Move”, his starting moves are “Veteran Instinct” (+1 Momentum when starting a match) and “Put Over” (when you show vulnerability in the ring…). His Audience starts at +2.

And with that, let’s get ready to rumble!

At the start of the match, Hellbinder and Mighty Joe Young declare the terms of their feud: Joe doesn’t like endangering students, and Hellbinder does. Both wrestlers cut a promo.

Hellbinder goes first with a Heel taunt, and rolls +Look for a 12! He’s already going to start with 2 Momentum, so now he gets to start with 3. He wants to piss Joe off, so takes +1 Heat.

Joe, in return, is just here to pummel a bad headmaster! He rolls and gets a 5. The audience kind of likes a bad boy, so Creative makes the move Steal their victory (preferably via their worst enemy) and decides Joey is now scheduled to lose the match.

The match begins! Hellbinder has control. He uses a mixture of infernal powers and nimbleness to put on a showy display of rope-a-dope against Joe. He rolls Wrestling, showcasing his Gimmick, and rolls +Look, but gets a 6!

Control shifts to Joey. Joe now has 2 Momentum, and Hellbinder has 2.

We cut to the managers of each wrestler, who are going to cut a promo on behalf of their performer. Is this legit? Well, maybe.

Kiln and Roddy both throw some trash talk around. Joe gets an 8, choosing to gain 1 Momentum. Hellbinder gets an 11, and chooses options to gain 2 Momentum.

Back to the action!

Creative commentary: could Hellbinder have spent Team Momentum to make that 6 a 7? Sure. I don’t have that fact internalized yet, so I didn’t have him do it at the time.

Joe narrates a heavy-hitting series of moves that leverage his prowess against Hellbinder, letting the teacher dodge and weave until taking a clothesline to the face. Joe rolls Wrestling with Power, for a 13!

Joey gains 2 Momentum (totaling 4) and +1 Heat with Hellbinder. He really wants to win this match, so decides to do something risky. We cut to another interview, only this time it’s Joey breaking kayfabe by rolling footage of the museum incident (which Alex handily recorded). Normally Joey would roll a +Real of -2 (not great), but he’s got enough Momentum that he’s banking on some kind of success. He rolls a 5, and spends 2 Momentum to bring that to a 7.

He regains the 2 Momentum, and picks 1: he loses 1 Heat with Hellbinder (who’s not going to have fun with this backstage). But he’s still in control.

Joe feels like it’s time to wrap this up! He goes for the turnbuckle to unleash his patented move, the Stop Motion Stunner! He rolls finishing move, but gets a 6! He spends 1 Momentum to get a 7. Hellbinder chooses to flee the ring, giving Joe +1 Heat with him for the inevitable rematch.

Well, that’s my first fumbling effort to run World Wide Wrestling. I don’t know if I did a good job, but I hope it was interesting to all of you, the Imaginary Audience.

And the crowd goes wild!