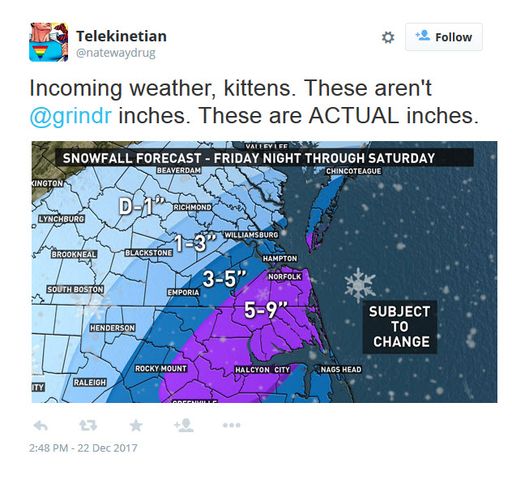 I choked on my coffee at “grindr inches”, and that whole sense of humor takes me back to friends who talked pretty much like that.

“This,” Jason mused, watching the Action News “Storm Center 9!” videos of cars in the city twirling and careening after only half an inch had fallen, “this was why my Dad invented the hoverdisc. Oh, yeah.”

The he frowned, sighed, levered himself off the couch, and headed for the garage, letting the nanobots flow about him like a snow suit. There would be people crashing and hurt and freezing out there and, now that he considered it, search and rescue over difficult terrain actually was one of the reasons Dad had invented the hoverdisc …

Telekinetian is on A-10’s team, and attends Gardner on scholarship. He’s the VP for the school’s LGBTQ+ club, credits himself with getting the “Q+” added and, the year before Jason joined the student body, wrote a paper on the unavoidable gay subtext of the old JQ cartoons that was republished in an academic quarterly.

The concept of super-science heroics might be open to endless reinvention, but any attempt to make this fictional family less gay only adds layers and layers to the gayness. Make them lighter, and you emphasize the camp appeal. Make it “serious” and you emphasize the repression. Add an off-again on-again adult girlfriend for either father, or a female sidekick for the teens, and you emphasize the avowed bachelorhood. It is both camp and butch, repressed and sexualized, erotically gear-fetishistic and homoerotically anti-feminine; Schrodinger’s rainbow-streaming nyancat.

He is a Junior, usually socially outgoing in the extreme, but drops to a stammering murmur if Jason is actually part of the conversational group (doesn’t happen often enough for Jason to have noticed), and mercilessly roasts pretty much anyone who verbally crosses him or his friends and acquaintances.

[disclaimer: totally reskinned the pull-quote from The Caped Crusade, because reasons]

“No more Aunt Harriet. It’s time to shave the beard and show your face proudly.”

Jason abstractly respects TK’s activism but – having been sent a copy of the paper (from at least a dozen sources – half of them anonymously, most of the latter with snide comments – but none of them TK, who wouldn’t have had the nerve) is both resentful and uncomfortable around him (which is almost certainly why he doesn’t notice TK’s awkwardness around him).

If Masks were a half-hour sitcom, this would be an obvious cue for the two of them to get stuck in a stalled elevator school panic room together.

If Masks were a half-hour sitcom, this would be an obvious cue for the two of them to get stuck in a stalled elevator school panic room together.

This is the obvious cue to have TK show up while Leo is piloting Jason Quill’s body around for a day, because we’re Steven-Moffat-writing-Flash-as-a-half-hour-sitcom.

(Also, “Steven-Moffat-writing-Flash-as-a-half-hour-sitcom” is doubtless the best hyphenated term I have seen today. Possibly all week.)