Jason – understanding people? Let’s see.
>> 1 Insight into what happened at the DC Debacle.
2 Insight into my personal deep history.
>>>> 3 Massive progress on Numina’s new body, ready for Alpha Testing.
A Damning Silence re DC Debacle and Vyortovia to the press.
> B I say things that really piss off the directors of the Quill Foundation.

So no public blowback about the connection between Quill/DC and Vyortovia. But in non-public areas, competitors and investors, and Foundation are unhappy. Amir was always better at lying than I was. I tended to be more straightforward about the burning bodies.

So Jason mildly throws Dad under the bus. “Listen, Dad was happy to put bullets in foreheads into terrorists for this kind of shit. The Foundation is cool. Dad – I can’t speak for his actions here or how they are connected to the Vyortovia incursion.” Lauded for his honesty and candor by the press, not so much by other parties.

Plan: Flying down to Florida. With Numina … in her new chassis.

Bubble of joy. Waiting for a shoe to drop of personal screwing up. But, still, a great holiday break (Otto’s commentary notwithstanding).

How much is Rossum’s message weighing on him? Leo told Waters about it, but Waters is VERY busy. Leo intentionally pushes it aside.

Talk face to face with Waters --> offstage. Trying to provoke something out of AEGIS? No. But can trust him to do something with the info. Messages back to Leo – AEGIS does not have anything on Leo’s mother, at all. But there is some Rossum-related stuff they need to talk about – about both him and his assets.

Over the break doing family stuff.

Parents seem to have dialed back over worry, given how he did great while all the parents were asleep. And they know somehow that Adam checked in on them. 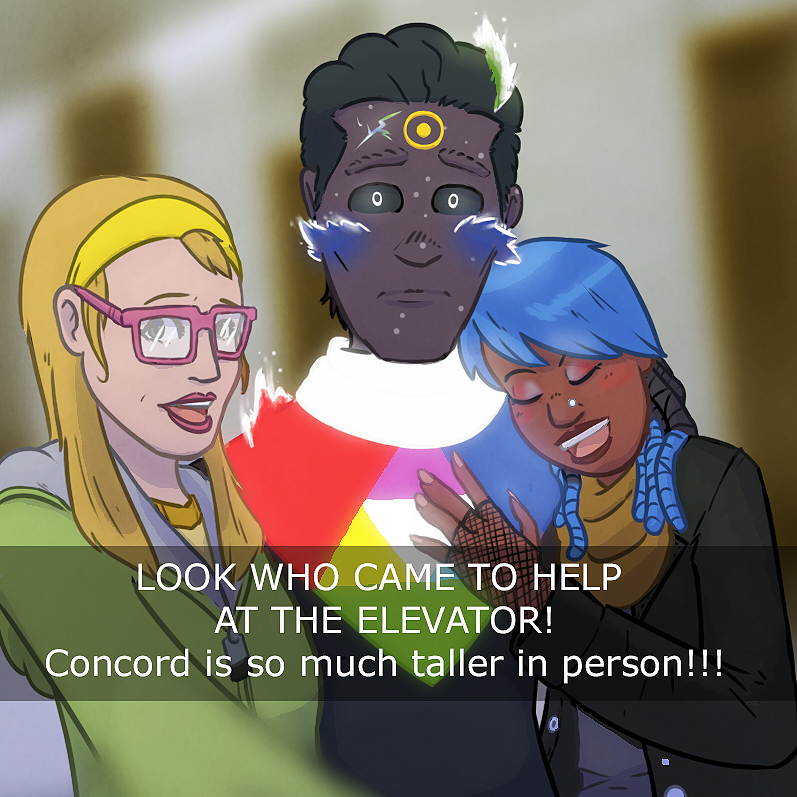 797×797
Mom has pulled up a picture from social media – image of Concord and Ponies. “What is going on here?” Might be getting bigger when turning into Concord. Older. “I don’t love this. Come here and give me a hug now.” They are proud of him, and he was focused on the right things, and who are these two girls and why are they hugging you? Rebecca [Power Pony] and Nono. They were … very happy to see me?"

Nothing to sort out with dad … at the moment.

What’s Christmas morning at the Gale house look like, 3 days after the night of Many Rescues? Normal Rockwell? Nobody meeting each other’s gaze?

Certain amount from everyone that everyone wasn’t involved in the Vyortovian hijinks.

Dad: “I know what we did seems horrible. At the time … science, politics, international relationships … it seemed better to keep people from panicking. I didn’t expect it to go on as long as it did. And some people took advantage of it, affecting your team mates. The decision seemed simpler two years ago.” But willing to answer questions. Being honest is the only move he has.

How much it’s affected Harry’s team mates – didn’t think about how it might affect, or the Hecate might be doing something specific, She had her arguments, but everyone thinks she had deeper reasons and things she was doing. Mom has been on the phone a lot.

News headlines coming out about Vyortovia. AEGIS has been pretty quiet. Goes over to the Quill compound to see how Numina is doing.

So Jason has been helping work on Numina’s new shell / physical instantiation. Hovering assassinbot with gun mounts substituted with hard light projectors. She has tactile feedback as a priority over feet that touch the ground.

So as Leo comes in, Numina is fiddling with shifting her clothes, but she has no legs. Jason seems to be channeling his Charlotte fixation …

“What the fuck is this?”

Numina blushes. “Jason is helping me with my body.”
“Oh, is he?”

Jason is kind of oblivious, spark-deep into the cool stuff he’s done.
Li’lycia is there. She makes eye contact with Jason, rolls eyes, looks over at Link. Pay attention– 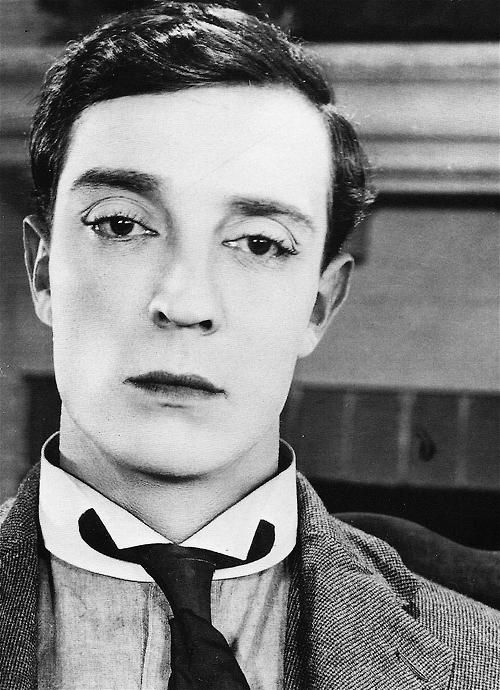 Conference room. Asks Pneuma to come along. Leaving Numina … behind …?

“Jason, this is the part where I threaten your life.”

What are your intentions?
I don’t know if it’s any of your business.

Numina is amazing, smart, friendly, wise, clever. Any normal person would fall for her immediately. She’s …
Yes.
She’s alkso vulnerable. If you hurt her, you will lose her. So I will just say … be careful, good luck. Do what you can. The risks are high. 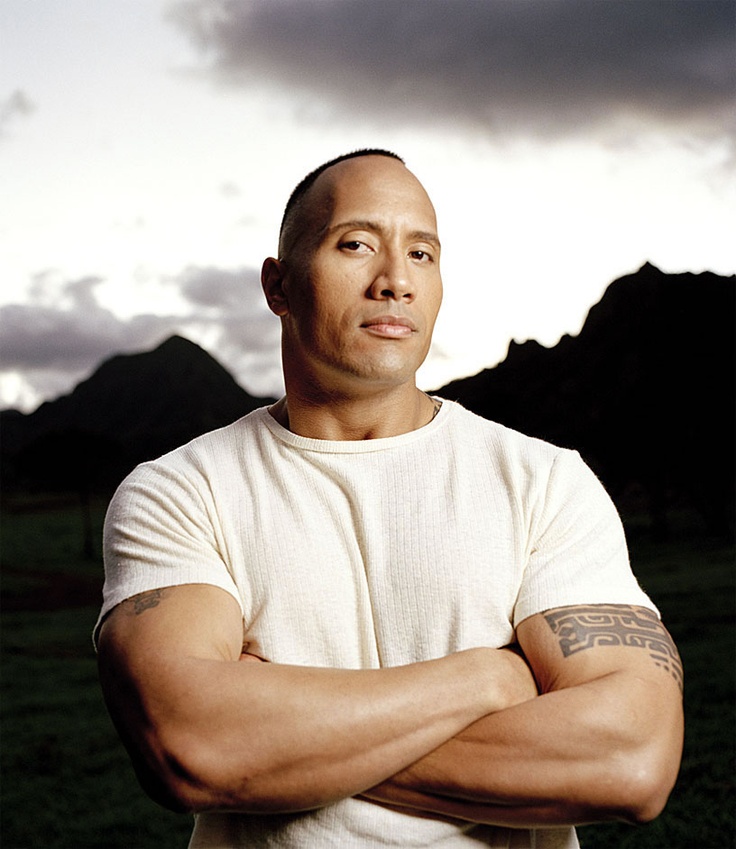 736×849
And standing next to Link is Li’lycia, arms crossed, Dwayne Johnson eyebrow raised.

Leo pats Jason on the back, goes back to the lab.
Pneuma is still kind of gobsmacked (?)

Walks back in the lab. Leo says, “I think you look great.”
“Look what I can do with my hair.”

Pneuma. “If it’s any consolation, I have trouble keeping up, too.”
Jason glancing back and forth between her and empty air / Li’lycia.
“Is there someone else there?”

Jason realize, this is a perfect moment.

209×512
(Li’lycia is on a bench looking pointedly sweet and innocent.)

Leo: Actually, Numina is a great person to talk with you about this.
Numina and Pneuma both nod.

Leo: Jason, you’re real weird, but that’s part of what makes you awesome. Still hate your dad.
Jason: Comment critical about Dad.
Li’lycuia flickers out, and reappears looking … a memory of her looking straight into my eyes. “The next time we see your Dad, I’m so going to kick his ass,” Then flickers back.

Leo: Swear to me you won’t have Numina dress up like Alycia.
Jason looks horrified at (a) the suggestion, (b) the prospect of never being able to not visualize this again.
Numina whacks him on the shoulder.

Don’t move away. Buidling another body.
Numina is always into more bodies.

Leo will watch him.
Part of the team. Just afraid of leading the team in a way that’s compromised.
Leo: Sometimes doing the wrong thing is better than nothing.

Folks are out and away. Lots of HHL meetings going on.
The whole “They can’t protect us” thing is happening to some extent, but it has been two years. HHL coming under some heat over inability to explain – premiere supergroup, big names.
So kind of nice that 'rents aren’t around very much.

Casual texting with A10. Uncle Chase as the mentor of That Other Team is kind of … weird.
Texting, rather than phone calling.

A10 has been pretty excited over the attention paid over the stuff she and her team did with the Fimbulwinter. But that drops off mid-week. Something has her down or frustrated. Harry basically asks [Pierce the Mask]: What do you want me to do?
Uncle was coaching them, thought did really well, so … that means it’s time to step and be a public team, but Chase doesn’t think we’re “”""" ready “”"". We could be doing stuff, and he doesn’t want us to. Could you --? Harry offers to go to talk to Chase.

Harry …
Dinner with Chase over is horrible and awkward. Parents preoccupied. Dad watching CSPAN. Leo is there and a reminder that he’s thinking of moving out. Mom’s annoyed about the TV. Pneuma is there, for a change. Chase – admires the stuff that Menagerie did, plan, leadership, etc. Kind of surprised that kids like Stingray listened, so good leadership. ('Rents are still kind of upset, distracted and/or tight-lipped.)

After dinner, walking to the door. Mentions the A-Team. Chase glances making it clear that it’s kind of a secret. Harry plays up the job they did, handled selves well, great team. “I think they will be.” Chase: Individuals good/okay/great, but not so much as a team, more inspired by the Menagerie. Oh, and he clearly really hates the “Menagerie” name. Playing it safe than sorry. Need a plan before you run in. “Wouldn’t you agree?” “They asked me for the help, so I take that responsibility. And, honestly, I’d be happy to give some advice to your team, too.”

Pushing labels: Superior+, Danger- … ??? (And would mark Potential and take an advantage forward.) Instead … rolls and tunes them out, and takes -Guilty. Cancels influence, take +1 forward. “Wouldn’t it be better for them to go out there with you and make the mistakes where you can help them, rather than be stuck in a situation where you can’t protect them, because you’re asleep.”

Fine – offers to get uniform and lead in the field, but wants to see the Menagerie in action, because half the time it looks like you just stumble into a win. So, if you agree to a test …
Deal. (Influence over Chase, because he overreacted.)

Week into the break … email from the school, damage to the building, so South is breaking out into other new schools. Times for going to pick up your stuff from the lockers. Dad offers to drive him over (good fit to 4 10s). Adam is going over to Gardiner Academy. Family is kind of excited. Dad isn’t enthused – money problem frown. Concern and worry.

Driving in the car. Quiet. Sol: Your father is upset about this transfer. Why?
Adam … finally asks.
Very proud of you. You’re doing really great things. I wasn’t an A student. Unsure about you jumping ahead; had a lot of meetings with asst principal (a surprise). Bothers me the stuff you have on your shoulders, and not stuff I can carry for your, which I’m supposed to. Just … trying to keep up. (Not a guy to open up. Wizard’s curtain stays up.)

Adam gives a message back of … something that Mom and Dad say to each other all the time.
And he does the blink of surprise. Maybe not surprise, but needing to blink really fast. And a kinda hug-kiss. Thanks, that helps.

School. “I got thrown through that wall. A couple of weeks ago.”
Damage wasn’t just Yule guys, but also the Vyortovian guys, which is one of the only places that was true.

Adam … Ep. 10 … Farlander talking about Keynomes at school. Sol now can give him basics … keystones of the universe, power and influence over reality. Looking for one here? Sol considers it noteworthy… 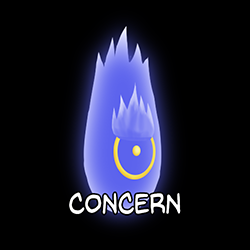 Sense something here, somewhere, deep, under the school … kind of at the center of the whole city. Sort of like a Hellmouth.

PowerPony sends a message to Leo: GG left a note for you. Leo pulls up in costume. It’s for everybody, but I don’;t have contact information for everyone … yet. Also, AMA, next week, it’s happening.

“I spotted something worrisome. I’m going to pop over the Sepiaverse to make sure everything’s okay.” (GG Clears Insecure.) 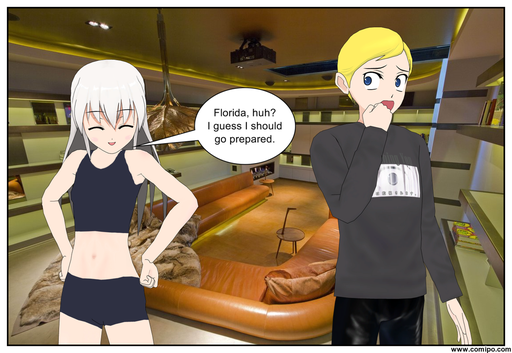 Piles onto a Quill charter jet, with Numina (alpha test!), down to Florida where Amir is.