I mean, we were all exhausted, and the shock of all the destruction … and a ton of personal stuff, y’know? And … it was all gonna get a lot more intense.

Mette’s up at the helm, very, very focused on piloting. Roddy’s unconscious, although the ship says he’s okay. I’m kinda wondering if he’s faking. Kiln and Alex and Tahi are just hanging. I’m kind of in a corner, staying quiet and thinking. Of course, it’s not that big a ship, so “in a corner” is still taking up a bunch of space.

And Alex is trying to convince Tahi that’s a good thing her home’s been destroyed by the moose and then by the orbital death laser thing, and I’m wondering if they’re feeling kinda guilty about it, but Tahi’s just kinda uncomfortable, like she’s had that job so long, in fact was made for that job, and now it’s gone.

That would be disquieting.

Mette tries to make her feel better, which if anyone can do it’s her. She’s telling Tahi she’s got some big role in the future, though she doesn’t say what, which is always kinda disquieting, too. And Alex hops on that bandwagon, that people can choose their own purpose, and she’s not sure she’s people, so then they suggest she watch Wall-E on the ride home, so she goes to the rear and starts watching the movie on some little screen.

Yeah. I hadn’t watched it before.

No, that your craft has a modern movie in it.

Ahem. Yes. At any rate, that it has a movie from this century in it.

Oh, Alex has like terabytes of media files on various devices they got on them. It’d be surprising if it wasn’t available.

And that’s when things started getting really uncomfortable.

Well, Kiln, they come walking over to me, and pat me on the back, and congratulate me on declaring my intentions, and how they’re looking forward to trying some good coongee.

That’s what I said. And they’re all, it’s a special dish made to celebrate a “partnership.”

Also what I said. And they’re, oh, yeah, we heard you declaring your intentions toward Mette. So, y’know, break out the coongee.

Not what I said. Turns out, since there was a drone there in the jungle when I’m all talking to Alex, it’s all being broadcast back to the temple, so everyone heard. Every. One.

How did you feel about that?

Angry. Furious. Mortified. Really, really upset. I mean, was it on purpose? Was it an accident? I dunno. But there I was, all “Oh, I care for Mette, but now it can never be, because I’m a disembodied mind in a super-gorilla body,” and it turns out Mette’s on the other end, taking notes.

I know! And Kiln’s chattering away about coongee and what it’s made of, and I’m looking at Alex, who’s got to have heard this, and they’re all heads-down playing video games, and I’m looking at Mette, who ditto, and she’s very focused on her piloting.

And you were focused on …?

Not doing something that might break open the hull while we’re underwater? I mean, I want to take Alex apart. But – I’ve already done stupid, violent stuff that day, and I don’t want to do it again. Especially if Mette’s around. So I just …

… go back and watch the movie with Tahi. I hadn’t seen it before.

What did you think of it?

Eh. I mean, maybe it meant more to her, being about robots.

So that’s the trip home, which didn’t get any less comfortable for anyone except maybe Roddy. Fast-forward, and we’re back at the school, talking with Hellbinder, and Princess A, about our having brought Tahi back.

You heard anything about what happened?

I’m here to hear what you care to share with me.

Huh. So, anyway, Hellbinder’s not real thrilled about the whole thing. Kiln, they want Tahi made a new teacher here, and Hellbinder’s having none of that, because there’s a lot of red tape and it’s a long process, and all the other teachers would have a fit if she just showed up like that.

So maybe a new student, gets suggested. But Hellbinder, he’s all about what Tahi wants. And she just wants to learn about the world, and maybe help people, which is nice. So Hellbinder enrolls her, and she’s like a half-member of our “club” for a while.

We break up then, though Princess A wants to talk with us later. I go back to my room.

Hell yeah. I mean, even if things were … different, you spend hours together in a ship like that, you want some time alone, y’know? But … I had something I needed to do.

How it’s over between us. How I’m – like I said. I needed to tell her.

But she already knew. Or knew how you felt.

Yeah, lotta words, but none of them were quite right. Been working on it for an hour or two, when the door knocks. Guess who it was?

No, it was Kiln, with Chris. They’d been cooking and trying to recreate this coongee stuff, and had a sampler tray with different variations, and decorations, and all that shit, excuse me, and wanted to share it with me to, I dunno, make me feel better.

Like I wanted to kick their ass – Kiln, that is. I mean, I can remember being just a kid, going off to some sample party for some cousin’s wedding, and being bored out of my skull, so the whole idea is awful. That’s one. Then, two, much bigger, it’s like they’d just peeled off a big stripe of skin and Kiln was busy rubbing salt into it and commenting on how pink sea salt was different from Himalayan black salt, and not noticing that they are literally rubbing salt into the wound. Especially since, three, if Chris is there, that means she knows what happened, what about me, about me and Mette, everything, and that means everyone’s gonna know, and everyone’s gonna be looking. Looking. At. Me.

No. I didn’t. Again, really trying not to be all monstery and stuff, whatever I am. And Chris, it wasn’t her fault, and I didn’t want to – let loose, in front of her. I was just – I mean, I couldn’t even. I just told them to leave.

What did you do then?

What else could I do? I went back to writing my note. 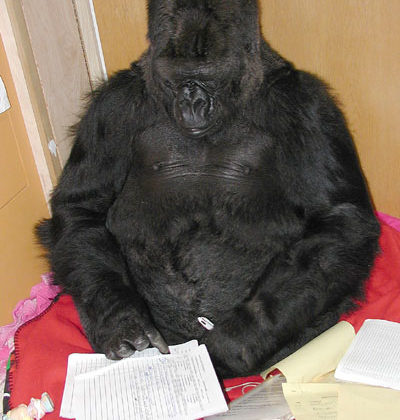