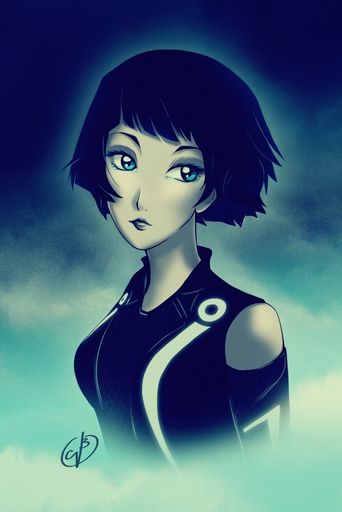 I met Alycia Chin when she drew pistols and almost shot me.

The attack on Federal City was over before it had properly begun, and the city (town? village? quest hub?) inhabitants were celebrating - an option I’m not sure would have even (or ever) occurred to them a few hours ago. Charlotte - Ghost Girl - was the heroine of the day, despite looking more than a little grim whenever her eyes drifted in the direction of the downed enemy transports.

Jason was… somewhere, having a lively discussion with Rusty (and, presumably, Byron Quill, though I wasn’t sure how much he could contribute at the moment).

No one really seemed to know what to do with the slightly glowing girl with an aversion to chairs, or the scowling outsider who’d come topside with Jason Quill and seemed disinclined to either celebrate or surrender – it only seemed polite to go say hello.

(Or, at least, politeness was a useful pretext for staying close and keeping an eye on the well-armed international terrorist hyper-genius.)

She sensed me coming, despite the fact I was physically unable to give myself away with some unwanted noise. One moment, she was frowning at the pockmarked capitol building, the next she was facing me, two guns leveled at the middle of my forehead.

We stayed in that position for several seconds, both taking the other in, both totally calm. (She, after all, had all the weapons, while I happened to know she wasn’t pointing them anywhere dangerous.)

“Dressed like him.” Her eyes narrowed. “And a hard light projection.”

I rocked my head to the side in something like a shrug. “Not what I was going to say.”

“I don’t care what you were going to --” She tilted her head, inclining it forward a few degrees. “You sound like one of my dad’s assassin drones.”

I raised an eyebrow. “I wasn’t under the impression they were programmed for conversation.” It wasn’t what she’d meant. I knew what she meant - the propulsors on the drone shell gave off a soft whine at 23 kilohertz - but I also knew she shouldn’t be able to hear it.

“Adorable,” she muttered. “He built a bodyguard out of old parts and programmed it to flirt.”

My eyes narrowed. Not angry, exactly; just picking my way. “We built a shell out of old parts, to house my consciousness, the inception of which he had nothing to do with.” I let the corner of my mouth curl. “And I flirt because I like knowing who can keep up.”

Her eyes widened, less than a millimeter, and… she… blushed? Barely, but still.

The guns vanished, and she turned back toward the large building in the distance. “Can he?”

“Jason? It varies.” I turned the same direction. “Wildly.”

A quick, soft snort. “I remember.”

“Mmm,” I said in wordless agreement, watching her without looking her direction (one of the benefits of a hard light body with three hundred sixty degree visual scanning). Her faint smile faded, just the way his did whenever he thought about remembering for more than a moment. Of course.

I discarded any of a dozen things I might have said that would have done no good, or raised her defenses, then turned to leave. “You, on the other hand, seem to do just fine.” I called back, just loudly enough to carry. “That’s promising.”

It was… rewarding to see the look on her face.

Especially since she didn’t know I had.

Summer as I wrote her never intentionally flirted with Jason, other than a teasing remark one time. She might say otherwise to test Alycia’s response. Jason may have interpreted her actions that way (many, many men read that into many, many women), and I can imagine Alycia assuming it too. And she might have unconsciously done it… We will see if Jason ever takes up her offer to read her mind and finds out the truth.

Summer as I wrote her never intentionally flirted with Jason, other than a teasing remark one time. She might say otherwise to test Alycia’s response.

Also, I was thinking about your comment about her being more of the wild/rebellious one - I saw this as her consciously choosing this because it’s outside of her comfort zone, to differentiate herself from Aria more. So some playful banter/flirting/teasing felt right, and the idea of banter as a ‘can they keep up’ litmus test is personally familiar.

That she didn’t actually flirt with Jason, but did with Alycia, mostly to snap her out of her funk at the end, is maybe/hopefully an interesting move on her part, both personally and as a way of interacting with Alycia? (I’m using question marks because she isn’t my character, and I want to make sure I’m not messing up.)

I qualified it “with Jason” deliberately.

So yeah, this felt right. As did Dave’s writing earlier. I can tell the difference in voices between the three of us, but I have yet to see anything I felt was actually out of character. I wouldn’t call her a deliberately shared character yet, but I think it’s an interesting experiment. And I do like seeing dynamic NPC-NPC interactions.

I guess this thread is also a good place to out Summer a little bit: while Jason might have vigorously unexamined feelings about her, she’s more introspective and has probably figured herself out. I don’t know if she’ll fall for Jason (that’s in Doyce’s hands), but if not, she has other options, and could also remain unattached if she liked. Sometimes that really is for the best.

Whatever else happens, though, I think she’s committed to being something for Jason that she believes he has never had in his entire adventurous life: a good friend he can trust and confide in as a young adult. Not a battle buddy, not a femme fatale he has intriguing tension with, not an exotic foreign girl who has martinis with him before being conveniently shot to make room for the next story’s girl, but just someone he can sit down and relax with and talk to. In that capacity, she’ll naturally be very interested in sussing out the woman Jason definitely does have eyes for.

When in doubt, I let my inner cluelessness and incoherence guide Jason and his love life. It’s never steered me wrong (though Jason might disagree).

Which is a fancy way of saying that I have no clue as to where the Jason/Summer/Alycia triangle (whatever that triangle looks like) is going. If things settle down a bit (ha!) Jason might be able to be introspective about it and make some decisions on actual pursuit. As it stands, he’s lurching forward along parallel courses, unwilling to actually push forward anything (yet) for fear of a massive fail, nor pull back because that would be a massive fail. Though sooner or later there might be a spontaneous kiss which will have an unpredictable reaction.

Of course, should he dither too long (or just through the natural course of events), he might find himself in the Archie Andrews position of getting neither girl in this arc. Which would be tres teenager.

The one thing Jason is sure of is that he doesn’t want to hurt either of them (though he may be making assumptions as to what would, in fact, hurt them) – Summer because she is so incredibly nice of a person (and Leo would kill him), Alycia because she deserves so much better (and Alycia would kill him).

Which, again, is a long way of saying I am assuming nothing as to how Jumina or Jalycia will end up. I can envision either, neither, variations on a theme, “Just” Good Friends, etc. All of which are, as far as it goes, yummy RP fodder.

I liked this story a lot. I applaud Doyce for being able to (ably) step forward with Summer (and, for that matter, with Alycia, who sounds just like I would expect her to) and show her growth and a very, very interesting interaction (overall) between them.

Whatever else happens, though, I think she’s committed to being something for Jason that she believes he has never had in his entire adventurous life: a good friend he can trust and confide in as a young adult. Not a battle buddy, not a femme fatale he has intriguing tension with, not an exotic foreign girl who has martinis with him before being conveniently shot to make room for the next story’s girl, but just someone he can sit down and relax with and talk to.

Expected no male of high school senior age ever. Although that is, in fact, a precious, precious thing for her to be.

I would insert a picture of Jason with a nosebleed, but finding a blond male nosebleeding is apparently not a trivial task.

This will have to do then.