Alycia made her way through the crowds to 6th Period. Study Hall. Good times.

Her eyes tracked about, watching the crowds. She wasn’t looking for anything specific, or even doing it all that consciously. It was just the sort of thing she did – taking in “normal” behavior (for this time-space-socio-economic cohort), looking for opportunities, running scenarios, considering exits, looking out for threats / attacks / assassination attempts, the usual.

She wondered if she’d actually get any studying done today, or if they’d spend all period chatting about Menagerie stuff. The latter was more interesting than the former, but it was also sometimes more frustrating – the team talked a lot about stuff, but, aside from brief flurries of activity (as often reactionary as anything else), didn’t seem to do much.

It was not quite how she’d envisioned life as a “super-hero.”

Alycia managed to turn smoothly without missing much of a beat. It had been a few weeks of class, and it’s not like she hadn’t learned to answer to Alice Chan before. But she hadn’t then been balancing being both Alice and Alycia, answering to both, and it was easy to lose track.

“You dropped this,” the cyborg teacher said. Alycia knew of her – both before coming to Gardner Academy and since from other students – and was still excited to have her for XP Physics (and now with vague regrets she wouldn’t have the opportunity to take GYRO’s famous elective on metahuman ethics), but she’d not found an opportunity to engage her in any meaningful conversation yet.

She glanced at the small envelope in the teacher’s hand. “That’s not mine.”

“It fell from your notebook in the hallway, just now” GYRO explained. “It says ‘Alice’ on it. That makes it likely to be yours.”

Okay, that’s interesting. “I suppose it must be,” Alycia said, curiosity piqued. It most definitely wasn’t something she’d seen before. She took the envelope. “Thank you.”

“You’re welcome,” GYRO said, simply, and continued down the hallway with the oddly graceful gait she had.

Alycia studied the envelope. 3x5", so annoyingly between A6 and A7 paper size (stupid Americans). On the front it said “Alice,” with a dismaying heart dotting the “i”. Beige, heavy paper, distinctive texture. Black ballpoint pen.

She slid a finger under the envelope flap and tore it open, brows slightly furrowed. Inside was a card with an image of a cat on the cover, and text –

She stiffened, and involuntarily glanced around. Nobody was watching her. People were walking past, around her, but no gaze met her eye.

Alycia glanced back at the card. Above the cute cartoon cat, were the words:

Her fingers automatically slid to the edges of the card, where they wouldn’t muck up any remaining fingerprints, though the paper was rough enough that prints were unlikely to be good. She carefully opened the card to look inside. A few pieces of heart-shaped glitter fell out and to the ground.

Her eyes widened slightly at that, and at the handwritten (in the same hand) message inside:

Most Certainly, In Fact!

And beneath it, a name she didn’t recognize. “YSA” It looked vaguely northern European, or perhaps Slavic, or –

Her second thought was surprise, disappointment, and anger at her first thought – that she’d never gotten a note from a secret admirer before. Which was rude and outrageous and who the hell did they think she was, to warrant deserve need something like this.

The third thought being, “Who?”

Only one immediate known prospect came to mind, stylistically: this was precisely the sort of thing she’d expect from Jason.

Two problems: Jason was still out of town, and it wasn’t in Jason’s handwriting. And Jason would definitely not do something like this by proxy.

Also, Jason couldn’t sneak up and plant something like this on her. No way. Hmmm. Even with the nanobots? She didn’t want to think about that.

But, for the moment, she would exclude Jason.

The next obvious candidate in a vacuum would be the person who “noticed” that she’d "accidentally dropped the note. Stop. Just … full stop. If this were some scheme, experiment, or … other purposeful thing by Ms. GYRO, Alycia was pretty sure she didn’t want to even consider it any further.

That narrowed it down to – well, the rest of the school. Great.

Was there anything to focus the matter further?

Someone who knew her. So … someone in one of her classes. Unless it was some sort of stalker-y admiration-from-afar scenario. Nothing to point in any particular direction there.

The card used “Alice” – did that mean it wasn’t one of the Menagerie? Nope – none of them would want to blow her cover, and further, they were all smart enough to know (if they were looking to be sneaky-crafty) that she would consider that.

And she really couldn’t think of anyone else in the Menagerie who would send a note like this. Adam was way too young, and not nearly assertive enough. Harry was far too – he was unassertive in his own way. With super-speed, that would be the easiest answer, but – well, look at the muddle he was in with Andy, that Irregulator girl. No, he seemed unlikely to be pulling something like this, on her.

Charlotte? The language was formal enough that it might be a fit. She’d not gotten any hint that Charlotte felt that way about girls (and, as Alycia didn’t, it might spell trouble), but … could this be some archaic 19th Century Antebellum South Victorian Era “We shall be best of friends!” platonic sort of thing? That would take research She’d mark Charlotte down as low probability, but not ruled out.

Leo? He was otherwise occupied, quite clearly. And that was all to the good, as far as Alycia was concerned. Aria also seemed unlikely, for the same reason.

Summer? That drew an involuntary shudder. But Summer was direct about matters – playful, but direct. She wouldn’t go in for “secret admirer” bullshit.

That was the team.

None of the study mates she’d engaged in there at school had shown any sign of this sort of thing. That said, she hadn’t been looking for it, either. Nobody to rule out there.

Was there any other method of winnowing the herd?

Handwriting was one possible clue. Just look at everyone’s notebooks in every class she was in.

Fingerprints (if any were left) were another avenue. She could call in help on that one – Oh, yes, I can just imagine handing this to Parker and asking for an ID. That conversation would likely not end well. And, even if it did – if Parker didn’t laugh in her face, or sniff in offense at her presumption, Alycia wasn’t sure she wanted “YSA” coming to the attention of AEGIS. Not yet. She would rather –

How did she really feel about this?

Irked. This was not something she had time for.

Offended. That someone would play this sort of game with her.

Intrigued. That someone would play this sort of game with her.

(Guilty. If they, whoever they were, knew more about her --)

She was tempted to crumple the whole thing up, pretend it never happened. If she didn’t react, then “YSA” would have no leverage on her. Might, in fact, leave her alone. She only had to throw the card in the trash can on the corridor corner there, and be done with it.

She – knew she wasn’t going to do that, before she’d taken a single step.

Alycia continued on toward 6th Period. But she was watching her surroundings with far more intent than before. 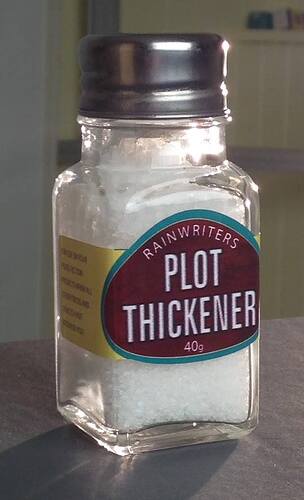