Involves a slight retcon to the plan as mentioned in during the game, but will likely have the same outcome. From a strict tactical sense, Concord would be super useful in the Sepiaverse dealing with ghosts if things go sideways. Ghosts might be able to become insubstantial, but that hardly matters to the Truth (and the other Virtues).

Adam was a good kid. Always listened to his parents. Tried his best in school. Was kind and helpful. If anyone could ever say anything bad about him, it was that he never seemed to show any initiative.

He was passive. A follower. His father Nassir tried many times to help him gain some independence and drive, but it never seemed to take. It just seemed like he would never make a decision about anything that mattered.

Today, however, Adam was ready to make a decision.

At the swamp base, the Menagerie were just finishing up the plans to assault the rift between worlds: attack from the Sepiaverse where Rook and Quill would have limited defenses—however, that side apparently was swarmed by angry specters of the dead—while Link, Pneuma, and Otto—who would be of limited assistance against ghosts—would assault the rift from this side to try and distract any surveillance they might have. It was not a plan without issues, but it was good enough to have a chance of working.

Adam agreed with the plan. He did not agree with his role in it.

Once everyone broke to make preparations, Adam waited for Leo to have a moment alone. As Concord, outward signs of nerves like sweating, shaking, and irregular breathing were not an issue. The occasional sparks that flew off his body shifting away from the Virtues to the color of Fear, however, was a much more obvious sign (at least to Adam).

Once Adam saw his opening, he approached.

“Hey,” Adam spoke meekly, suddenly becoming a bit embarrassed about how it sounded. Louder and more confidently Concord repeated himself, “Hey, Leo you got a second?”

“I don’t want to go to Sepiaverse. I want stay here and go to the Facility with you guys.”

Saying it just made Adam angry. Not that he didn’t want to follow the plan, but how it sounded. Like he was afraid to do his part. Adam was prone to freaking out in most Weird situations and ghosts (possibly the Weirdest of all Weirdness) seemed tailor-made to freak people out. Concord shook his head, dismissing the thought. He could explain better.

“Like I’m okay helping the rest of the team, but I want to go there. Jaycee and Harry from Here both said that Sablestar was working for Rook and Evil-Jason for some reason and she’s like the only person who knows how the Concordance works. Like, if I can talk to her—and she had no problem talking while making me look like an idiot last time—maybe that’s some info we- I can use when the other Concords show up again.”

“We don’t know where she’s at in our time. This might be my one chance to get straight answers from someone about all this,” Adam said, motioning to Concord’s body.

It’s not a dismissive “okay, whatever”. Leo turns, hears, listens, follows along, processes what’s being asked, comes to a decision and gives it voice.

Thinking maybe that he might come off as dismissive anyway, Leo tries to elaborate.

“I uh, I’ve been kind of a hypocrite too. Like, on the one hand I keep saying I want a team without a leader. On the other I keep trying to hog glory and blame for myself. I think the only way to fix that is to trust you all to know your stuff, and get on board when you say you gotta do something. Like with Charlotte and these ‘wounds in the world’. So I trust you, and I’m listening.”

There might actually be more. This is what he wants, but he looks Concord-nervous.

It’s about Adam can do to not blurt out, “Wait that’s it?”

He’d gotten himself ready for this. Prepared for an argument. Gone over the angles. Put himself out there to get his ideas ripped apart. Instead Adam had “won” without there even being a fight.

Adam had not prepared for this.

“That was all I had,” Adam replies. All the confidence that was there when he put forward the idea is gone from his face. “I honestly thought this was a terrible idea, but you’d do the thing were you take bad ideas and turn them into something that might work.”

“And this is a really bad idea,” Adam says, just nervously rambling at this point. “Like, she was basically playing with me last time. I can vaporize every Rook bot in Halcyon City in a couple seconds, and she shrugged it off like it was nothing. And then just leaves, saying I don’t understand anything.”

“Calling her out now that she’s Rook and Evil-Jason’s personal attack dog seems like a really, really bad idea. And I don’t think I’m going to just get to sit down in the Quill Tower conversation pit with all three of them and discuss the secrets of the Concordance.”

That last bit, however, gets the cogs turning finally. Evil-Jason might be working with Rosa Rook, but he was also the public face of things in this future dystonia. And while anyone else might bring up questions of why they look so young, Concord actually looks older than he did before this timeline’s Adam disappeared. Could he just schedule an appointment with Jason Quill? He’d be treated with all kinds of suspicion, but they did want a distraction…

“I don’t think they’ll go for it,” Leo suggests. “But you can always try. You’ve got the best odds of surviving a refusal.”

He’s still listening, watching, forcing his mind to recognize the alien emotions that Concord manifests, but that he has seen over the last few months more and more clearly. It’s still hard to read, but why read when the author can narrate?

“I remember last time pretty clearly. It wasn’t just ‘she was playing with me’. You went up to challenge her, and Otto and I played Balance the Buick. Shit, that was rough, but it was a learning experience for him and me. Facing her was one for you too, if I remember. And she ran away, not you. I trusted you last time. I trust you this time. Even if this blows up, I’ll trust you next time.”

He folds his fingers together and leans forward a bit. “So. I’m officially on board. You don’t have to justify yourself. But will you tell me anyway, what makes you do this thing you think is a bad idea? Why do you need to do this?”

That was the question Adam didn’t want to answer, because it meant decided what the answer was. Was it that if she told him that the Concordance was evil he could just dismiss it as deception or trickery instead of facing that particular fear? Was it that she’d hurt him emotionally last time they fought and getting another chance would get rid of that self-doubt that Adam felt every time they fought someone—“What if they’re just as strong as Sablestar?” Was it that he was tired of being kept in the dark and talked down to by everyone?

But Leo trusted him. And that trust came with obligations: Truth, Love, and Courage.

“I don’t know,” Adam admitted lamely. “It’s just… confusing not knowing why I’m even like this. Sol—Sol didn’t tell me a lot about the Concordance. They had a mission for me, but Sol wouldn’t tell me what until he was fully functional so I never found out. And I’m kind of worried the reason was because I wouldn’t like what it was.”

“The other Concords don’t seem like they want to talk to me, so Sablestar seems like my best chance to get some answers.”

Adam pauses for a moment as if he’s done, but Truth demands otherwise. “And I’m kind of hoping she thinks she can try Balance the Buick again, because I’m ready for that this time.” There’s an unusual eagerness to Adam’s words that he wasn’t even ready for.

“I mean, I don’t want this to turn into a fight…” Truth takes a hit and Adam is again surprised at himself.

Concord crosses his arms and looks away from Leo. Adam doesn’t want to know what his aura says about what just happened. “It was a stupid idea. I should just go to the Sepiaverse.”

A lot of flip answers scroll by on Leo’s mental menu.

Stupid ideas are what we do, Adam. Just go for it.
The other Concordance agents are assholes, I’m glad you’re not like them.
You’d kick Sablestar’s ass in any fight, I’m sure of it.

He decides to lay it out straight.

“Of course it’s stupid. We’re gonna fight Jason Quill, Master of the Universe, and Sablestar, Mistress of Mouthing Off. Backed up by a legion of Rook robot soldiers, soulless corporate hyper-tech, and a bunch of middle-aged Ponies who we let down. But…”

The other memories of that day assert themselves. “Taking risks can seem dumb. But risk is part of growth. Life kicks us out of the nest. Sometimes we fly. Sometimes we fall.” He smiles faintly. “And if we fall, our friends are still there to catch us.”

“But until then, we don’t know. Will we fly? Will we fall? Sometimes, we gotta know that about ourselves, and that is more important than anything, because that’s our future shouting at us to hurry it along. We have to test ourselves. We have to push.”

It’s not Adam this time. If the kid wants to stand tall, let him stand with the name he adopted.

Concord smirks and nods in agreement. This was exactly what Adam had hoped for: Leo turning a bad idea into one that might work. He had just done it in a way Adam hadn’t been expecting.

It still wasn’t the best plan. It wasn’t even a good plan. But it was a plan and it might work. Sure it was full of risks but Leo was right, for it to work Adam had to accept those risks and decide to try it.

“So I get Sablestar, you punch Jason, Phoenix takes out the Rook bots, Pneuma deals with the corporate hyper-tech, and that leaves Otto with the middle-aged Ponies?” Concord asks, the sarcasm dripping at the end.

Thanks Bill! This definitely helped me figure out were Concord’s head was going into this next session (and presumably fight). Don’t know if you have anything else that you wanted to cover with this (though certainly Otto piping in about Concord’s joke seems highly appropriate) but if not this seemed like a high note to end things on.

Here’s some foreshadowing whose specifics we won’t see until the actual fight, so I can wrap up with this epilogue, yeah. Glad to know you’re ready to go, and thanks for doing this.

Leo grins. Otto wouldn’t stand a chance against the Ponies.

A thought occurs to him.

“I got something very special to punch Jason with. Something I’ve been carrying around for awhile. I could use your help setting it up, though. Here’s what I need…” 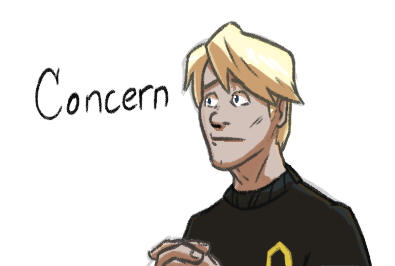 This comment posted by the Committee for Concern Over Jason Quill.

This comment posted by the Committee for Concern Over Jason Quill.

Hit me with a PM on forums, or an email. I want to loop you in specifically on this.