Kid Kelvin struts, rather than walks. He sneers, rather than smiles. When there’s a girl to be hit on, or a chump to be laughed at, he’s there.

Every kid gets through high school by evolving an ego defense mechanism. The other kids are like piranha, hunting for any weakness, anything at all. You have to be secure on all points. And if you can turn a weakness into a strength, so much the better. When he was growing up, the weakness was “you’re the son of a supervillain” - specifically, King Winter. Was it true? It didn’t matter. “Snowflake, snowflake” the kids would taunt. English classes taught the piranha new and useful synonyms for words like “ice” and “bad guy”, armed them with new weapons like metaphor or sarcasm, and sent them back into the pond to hunt anew.

There was some bullying and some use of ice powers, and a couple kids went to the hospital. Nothing the doctors couldn’t reattach once it thawed. Word got around that he was not a kid to be messed with, unless you were a bigger kid. But Kid Kelvin has been paying attention in class too. When cats and owls and peacocks and other animals need to protect themselves, they puff up, get big, using bluster instead of ferocity.

Well, bluster feels like a weak-ass move, but it doesn’t get you sent to two months of reform school with cops as teachers.

“Kid Kelvin doesn’t give a fuck.” “Kid Kelvin won’t give a shit about you.” “There’s nothing he cares about, except himself.” These are cruel things to say about someone, to be sure, unless that someone has positioned themselves to be unlikeable. And why not? There’s certainly plenty of kids, hangers-on, girls wanting the bad-boy experience, whatever, who are drawn to that sort. Better to reign in Hell than serve in Heaven, even if Hell has frozen over.

So yeah, it kind of sucks to be told you’re an asshole. And it just makes his forced grin a little wider, like a shark’s, which sends the piranha scurrying. The good, wholesome, straight-laced kids move further away, and the rough-edged kids who admire chutzpah move closer. They ain’t friends, but it’s still something.

Most importantly, it means he isn’t stuck with any real emotional connections. Nothing at school can really hurt him, 'cause those feelings are all fake. The hatred is fake. The admiration is fake. It’s just all school bullshit.

What matters is when he walks through the door. You always got to close it, or hot air will leak in, and that makes everything worse. Kid Kelvin gets home like he always does. A few knocks, a call through the metal of “it’s me,” the series of keys to unlock the security and turn bolts, the hiss of atmosphere exchange. He puts the milk or eggs or cheese on the counter - there’s no fridge, everything’s 35 degrees in here, all the time - and walks into the living room.

His old man is always sitting there, staring straight ahead. It’s a good day when he moves, or remembers the voice of his son. There’s a few days when Kelvin has to clean up a mess, or force the old guy to eat, or find something new for him to watch. Thankfully the remote control works in near-freezing temperatures, even if the television has to be specially isolated.

There’s no in-home care givers who can tolerate this atmosphere. Kid Kelvin is all his dad has. This is all that’s really real in his life, his stupid crotchety annoying old man and his incessant whining about little stupid problems and everything. And every day, Kid Kelvin kisses his father on the forehead when he comes home, and hugs him gently, and says “I love you, dad” in his ear. Screw school. Screw heroes who don’t get it. Screw everyone in the whole world. This is all that matters. 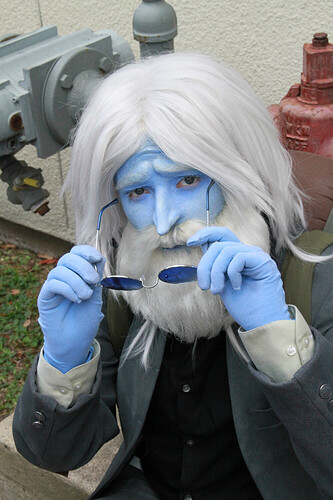 Only James and or Doyce know if this is really King Winter, or what else is going on, but I like to think this would work anyway.

Stingray might wind up being more of a star than me some day.

Bob would be a great sidekick; I try to keep them around.

Influence: The team is worthwhile; everyone gets Influence.

You are a celebrity in the city. By default, your audience is a limited group of interested fans, and you speak to them through after-action interviews and infrequent press conferences. Why does your audience love you? Mark all that apply.

Choose two demands your audience makes on you: