S: Okay, this is the doc I set up. Nono, I asked you to help me brainstorm this because (a) you are good at fictional speculation about real situations (b) you know my secret © you are trying to help my relationship situation and (d) I can’t really imagine what this would even look like? So I need an outside party. I’m not gonna talk about why we are doing this, I just want to try it as an experiment.
N: Thank you so much for trusting me. We’re following Script Change rules so please intervene on anything that doesn’t work for you.

The high-tech hero Link is secretly Leo Snow! People only found out about this recently when the Ponies, led by Maury Jones, had an amazing interview with his team. He has retired from heroing and is looking for a new home with his girlfriend, Aria Newman.

S: There’s another factor going on here that I can’t talk about, but any home they get isn’t going to be a conventional small apartment. So I’m just going to mentally make the adjustment if that’s okay.
N: That’s mysterious but okay.

Because they are only high school students, they can’t afford anything fancy. Both of them will have to work part time to make this work. Together, they find a small one-bedroom apartment. It’s near school, so they can still attend classes. But it’s also near the bus lines going to downtown, which Aria needs. As Leo’s business manager, she is the one approaching people with ideas about how to use his technology, and she needs to travel a lot in order to do that.

But Leo’s experimental equipment, and Aria’s suits and presentation equipment, also cost money. One day, they both reach out to someone else, someone they both care for deeply: Summer Newman, Aria’s clone. And one day, there’s a knock at the door. Leo opens it. It’s a girl who’s the spitting image of his lady love. Her hair is different, and she carries herself a little differently, but his heart skips a beat at the resemblance.

The three talk it over, and decide that pooling their resources will allow them to pay the rent and other expenses. And that night, Leo sits on the meager sofa, watching movies with Aria and Summer on either side of him. When he feels a warm and loving hand rest itself gently on his thigh, he reaches down to squeeze it lovingly, only to realize that it’s Summer’s, rather than Aria’s. He glances over at the girl he’s dating, but she’s smiling with approval. And both girls lean in, their lips

S: Okay, I think we can skip over this part.
N: Sorry, force of habit. I just wanted to establish that there’s both practical and emotional factors going on here.
S: I think that’s solidly established! Let’s move on.

There’s only one bedroom, but the three discover that night

S: Fast forward again!
N: Can I just ask, are you, Summer, asexual or anything? I don’t want to upset you, or disrespect you, and I’m sorry if it’s prying to ask but I’d rather apologize for asking than for offending.
S: No, I appreciate it. I’m not a child, I know about this stuff, quite well in fact. I have interests and desires of my own. I’m just not comfortable delving into this kind of intimate context with other people, even when it’s just fiction.
N: Okay, we’ll skip ahead a little. But I may have questions for you in the future, with that comment…

In the days and weeks that follow, the trio spend most of their time outside the house: Leo on his science, Aria on her presentation and business work, Summer on her own superheroing. The little apartment is usually quiet. When the three are together, it’s a special occasion, and they mark it appropriately.

Aria achieves a major deal, and Summer turns the Menagerie into a major superhero team! With national recognition, and more money coming in, the trio move to a larger house. By now, their relationship couldn’t survive without the three of them. When Leo comes home, one of the sisters is almost always there for him, though it’s never the same one twice. And when Aria gets home from an exhausting business meeting, someone is there with a kiss on the cheek and a warm cuddle. Summer can limp through the door, weary from saving lives, and find someone who loves her. While two busy people might never have time for each other, three almost always do.

S: This actually sounds really nice…
N: It really does.
S: So basically it goes from a money thing (rent, etc.) to more of an emotional thing, in your opinion?
N: Yeah, I mean, unless Leo and Aria can’t make their thing succeed? But you’re all so smart, I can’t see how that would ever happen. And if I can tell you a secret, my parents fight a lot and they’re usually away from the house, so I kind of think it’d be nice if there was someone else here who they could both rely on, you know?

They graduate high school. Should they attend college? Leo’s busy in the lab, but Aria needs the business savvy to negotiate new deals, so she goes first.

The three can’t all get married, because bigamy is illegal in the United States, but they remain a happily committed trio. The time comes, and they get together to talk about children. Adoption won’t work if they aren’t married,

S: Single parent adoption is a thing, but there’s a lot of scrutiny placed on unmarried couples and I’m pretty sure a three-way relationship is right out as far as most agencies go. Non-agency or independent adoption is possible, but states do regulate it. The Constitution doesn’t guarantee adoption as a right either, so courts will have a final say on who’s acceptably suitable. The petitioner (person doing the adopting) has the burden of proving their suitability to the court as well. And until recently, even many married and financially stable couples couldn’t adopt if they were gay. Also, changes in the situation of the parent can trigger a review of the arrangement.
N: You know a lot about this. Okay, let me try this again.

Because of the difficulties with adoption, they consider another option: a surrogate mother. Leo can take care of the genetic donation, and the family arrangement ensures that at least one person will always be home to act as a parent.

N: Hey, I have a question about this. There’s this thing where heroes keep their ID secret because of danger to their loved ones. It seems like you and your sister would be safe with him outed. But for purposes of our speculation, would three superheroes in the house be a risk to a child?
S: That’s a really good question. Let me pitch you a hypothetical: the effective birth mother of this child has some superhuman quality which the child inherits, so the kid is as tough as, say, Aria herself. So in that case, it’s probably okay, right?
N: Hmm, would the kid inherit Leo’s smarts too? That’s pretty neat.
S: I’m sure someone has given that question a lot of thought.

There’s an agonizing conversation, where Aria informs Leo and Summer that it would probably look better for the business if there was a married couple in the picture. After all, she needs to entertain business clients at home sometime, or bring a spouse to company functions

N: I’m just kinda making this stuff up, is any of this accurate?
S: Probably.

And stuff like that. Anyway, what are they going to do? So one option is that the trio breaks up, one of the girls becomes Leo’s wife and the other doesn’t. But what about their child? What about their love? The three go their separate ways for a couple hours to think about it.

But there’s another option. Persuade the world to accept their love, and their marriage

S: I’m curious how you’d compare that social challenge to, say, getting the world to accept getting married to a robot.
N: Geez, I don’t even know. Can we just pretend that everyone’s okay with that?
S: I’d really, really love it if people were. So, yes.
N: Fine, let’s wrap this up with a happy ending!

But then Radiance saves the life of the President (not the one we have now), who has a high approval rating, and Congress passes a law stating that consenting adults can get married, no matter whether they’re robot or what, and however many. This new legislation is celebrated by some, angrily denounced by others, and only one thing is sure: it will keep divorce lawyers in work for years.

N: Okay, how was that?
S: I think the message here is that this would just never ever work out. Which I already knew, but I’m grateful for the outside perspective. I know it was a really weird thing to ask you to think about, and you came through.
N: I’m happy to help, sweetie, especially when it involves writing fanfic.
S: Yeah, you’re going to delete all this, right? No saving it, no publishing it, no nothing.
N: Of course. I promise.
N: What are you going to do? About this topic, I mean. I don’t want to see you unhappy.
S: […]
N: That was like five minutes of typing indicators. I feel like you wrote a novel there. What’s up, hon?
S: Nothing, it’s fine. I’ll talk to you later on. Thank you again, Nono.

While the first half of this stemmed from Alycia’s earlier suggestion (which also spawned a couple funny comics), it led me to think about the latter half, which I found interesting enough to start pushing on: what is going to happen to the Newmans’ plans for business success, if/when a child comes into the picture? How safe is that child? How stable is that household going to be? And so on. I strongly suspect that the canonical family will have visits from Aunt Summer and Alycia, Uncle Adam and Harry, Grandma Charlotte (or will she be as unaging and eternally youthful as Summer herself?), and so on, helping out with the parenting, because it’s going to be sorely needed.

If someone does play a Newman kid in a future game (and I would love it if someone did, even or especially if it wasn’t me), some of this might appear there.

I really like this exploration Summer has been doing around this and the rest of her life. Feels very “end of high school” (etc.)

Alycia would probably have some further feedback, if the discussion circles back to her, but I don’t know that would be helpful or necessary. Alycia tends to go into Problem Solving Mode, vs Compassionate Listening Mode about such things. (Not quite sure where she gets that from …) 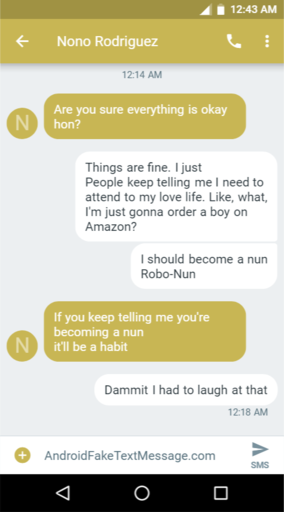 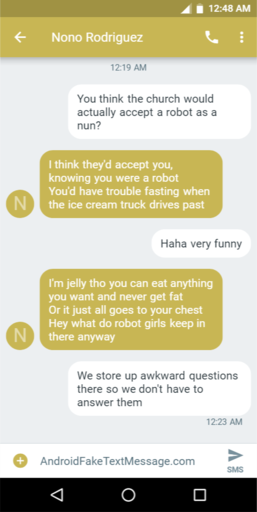 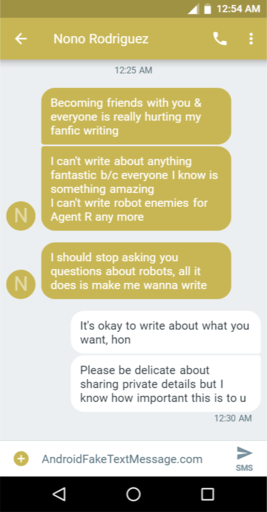 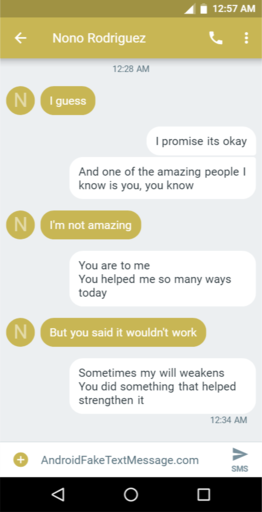 (Stupid dusty air in this room …)