City background for Demihumans or Blades in the Dark

Well, I’ll be testing the image upload capacity on this one.

Anyway, once upon a time, I fell in love with a fantasy city setting called the Free City of Haven. The source material is great, albeit unfinished (main artist died in a car crash in the mid-80s, the creative team sold the material to Chaosium, who did nothing with it since), and I’ve used it to run everything from DnD, WHFRP, Mythus, Big Eyes Small Mouth anime, WoDu, and probably a half-dozen other things.

I tried to buy the rights to the material back in the 90s, but never got further than the president of Chaosium sending me about 3 full sets of all the material they had.

If we played Demihumans, this would definitely be the city I’d start out with. There’s already a non-human section, and with the twists the game itself provides, it would give us a whole new spin on the city that I’m excited by.

If we did Blades in the Dark, I might use it, just as the basic map, so we have common reference points.

Speaking of the maps.

I spent most of the evening scanning the small color map and the MUCH larger black and white map sections, to see if I could get some kind of workable version of the files.

The main problem is my scanner is too goddamn smart for it’s own good, so it “intelligently” ignores the fuzzy edges of each sheet, which means I lose about 1/16th to 1/8th of an inch off the edge of every sheet I scan. It’s… frustrating. However, I was able to get together a couple workable scans.

First, the color version, with the goddamn annoying gaps.

Second, the black and white version. This was designed as 30+ cardstock sections, and was meant to be released as part of three sourcebooks. The problem is, they only released the first two sourcebooks with the map sections, so about a third of the city doesn’t get this super-detailed treatments. As a consolation, the section that isn’t there is mostly high-end noble estates and fancier business neighborhoods; the demihuman area, the ‘labyrinth’, and basically all the commoner areas and the interesting ‘old city’ core IS detailed.

Also, from a scanning POV, almost none of the map sections ran right to the edge of the paper, so the interstitial gaps are a lot smaller.

Finally, I took the transparent png of the black and white thing, and laid it over top the color map, to give the most detail where available and at least SOMETHING where there was nothing provided. The scale wasn’t the same to start out with, but considering these were two totally different, hand-drawn maps, it’s ASTONISHING how close most everything matches up.

Anyway, that’s been the fun parts of my weekend (for some value of fun). Also, I need a better (or stupider) scanner, where I can get scans out past the edges. Maybe Kinkos…

If I had all the time in the world, or just knew the right kind of app to build the thing in, I’d hunt down all the numerically keyed locations on the map and make them mouseover pop-ups or something. There are at least names and in 95% of cases, paragraphs to pages of content on each one, most of which I OCR’d back when I had a big old flatbed and no kids.

If the images are too large to load, there’s always the map I did for a MUSH we built back in 96.

The site has an upper limit on image file size, to avoid forcing people to download multiple megabytes just for loading the page (especially important on mobile). It still renders the URL as a link. If you convert the images to a smaller size, post those, and then link to the full-size image, that should do what you want.

It was actually fast for me to do it, so here they are. 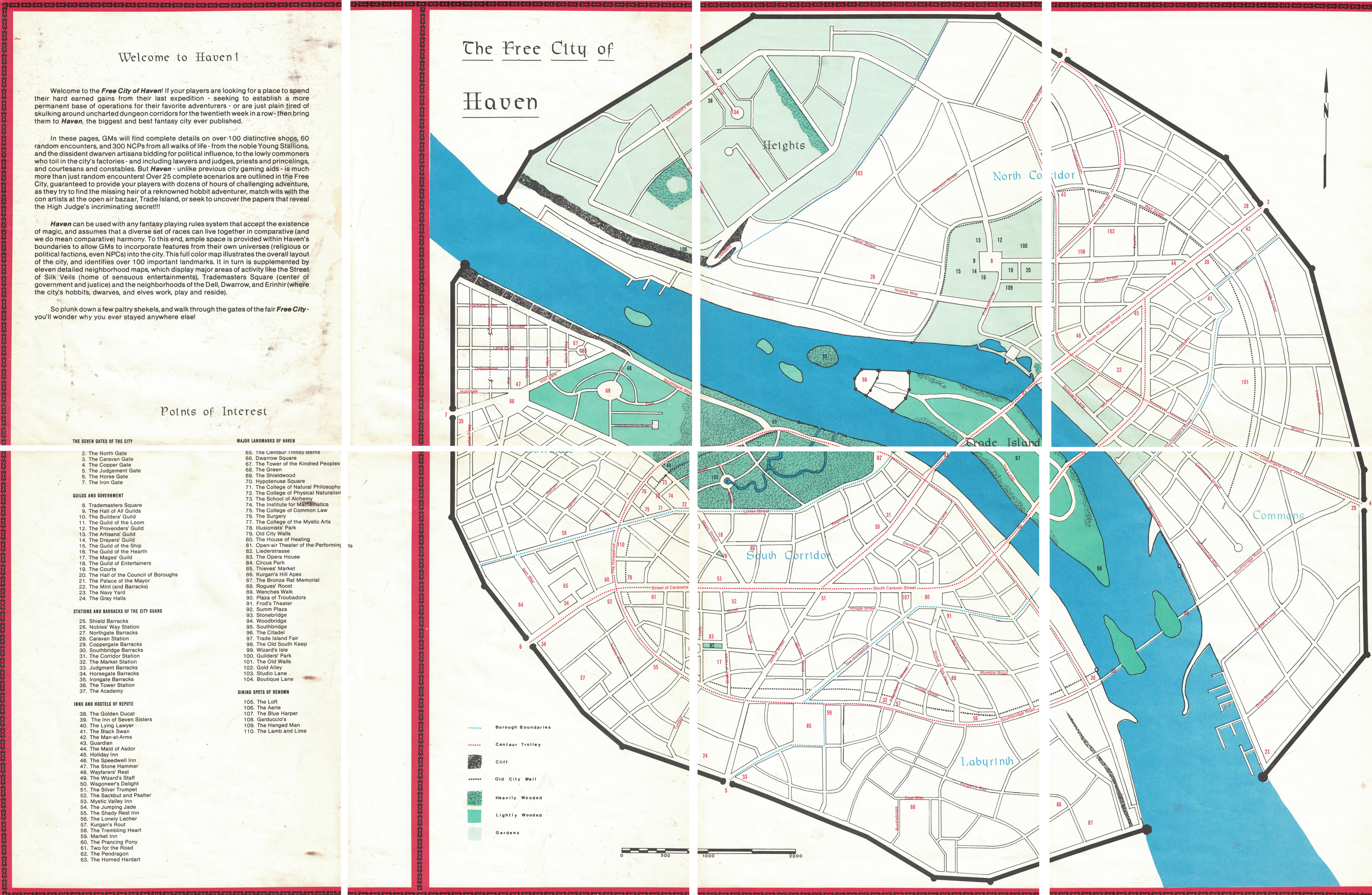 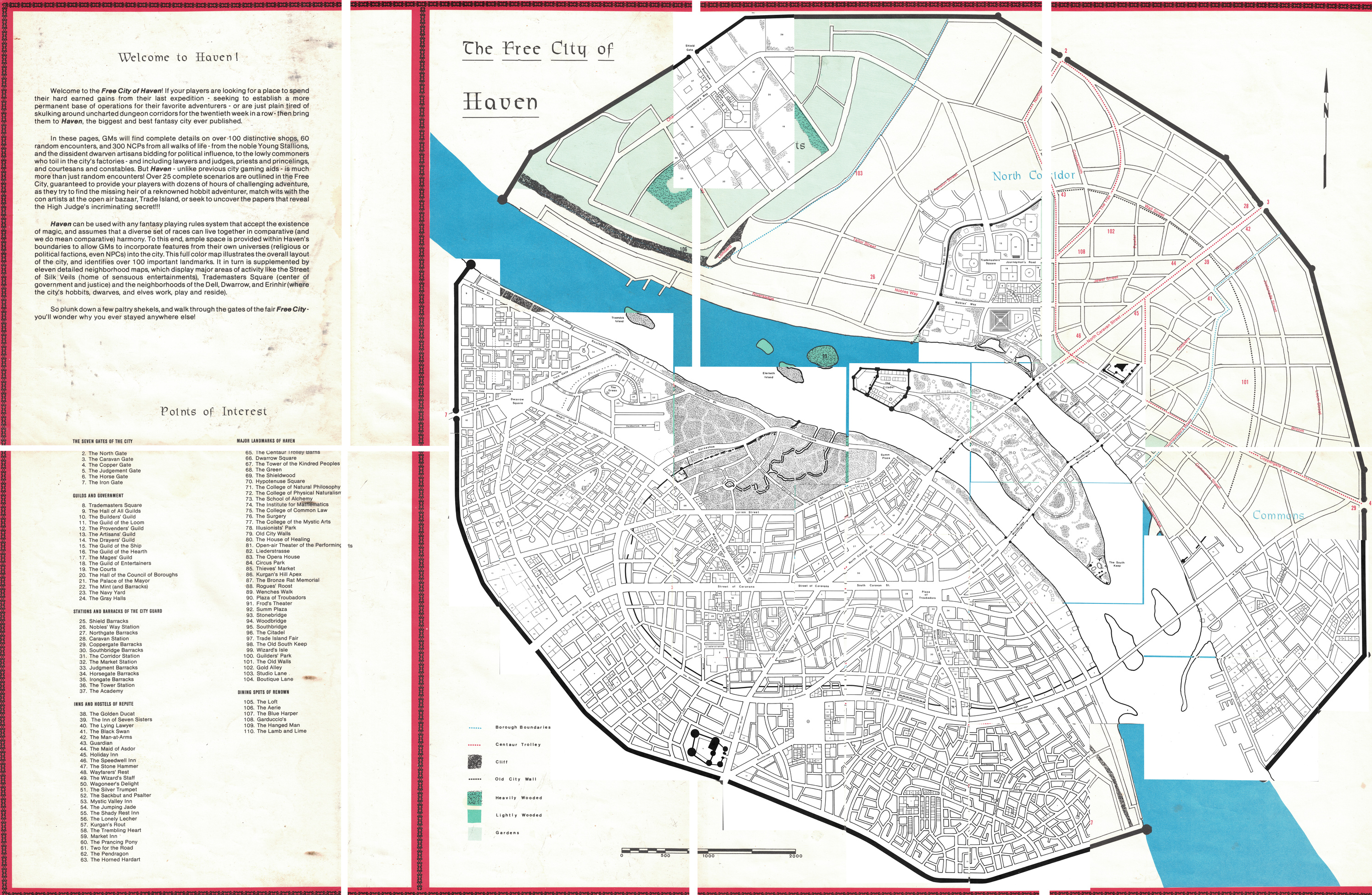 ImageMagick didn’t like the middle one, apparently, so I’ll try again later.

Dibs on the Solarium!

God that’s right. We were using the city when the solarium joke first came up…

It’s not a GOOD joke, but yes.