Summer watches the police from the window of Refract, the coffee shop and bookstore. And she pays attention as a holographic copy of Alycia, visible and audible only to her, gives a status report.

“Face recognition on minors is hmm, more legally problematic in this country. I can’t risk Jason’s computer system on anything too illegal, like hacking into the FBI, and I can’t take the time from overseeing this business to go do the hack myself.” Alycia taps her chin. “I wonder if this was Jason’s attempt to put me on a leash… We’ll see about that.”

Summer just blinks. I mean, what can you really say at a time like this?

Alycia goes on. “Fine. Those kids didn’t seem like an immediate danger. I think we can afford to take this slow and careful. First, threat profile. One teleporter, apparently limited to bathrooms. Two people who can conjure some sort of faux-alive constructs. Second. Objectives, unknown. There’s no known correlation between the Aerospace museum and this site, except of course that they’re monuments to historical superhuman activity, but that narrows it down to approximately all of Halcyon City. Activities here and at the museum suggest they’re looking for something physical, something hidden or buried. Faugh. Go do your volunteer work, that’s important too.”

As Alycia winks out of sight, Summer glances around. The ABCs gang - Daph, Marion, Amir, Greg, and Colin, are huddled together. Daph is glowering, but isn’t looking back at her. The rest are excitedly talking about the supervillain attack outside. Summer wonders what Colin told them about where she’d gone, or if anyone cared enough to ask.

The group eventually agrees to disband for the day and resume volunteer work tomorrow. People need to go relax when a thing like this happens. Summer manages to catch Colin on the way out the door, and smiles hesitantly. “Want to go grab some food?”

I must be really frustrating to him right now. I want to help him feel better.

He smiles a little at that. “El Tacorriendo.”

The pair hunker down in the uncomfortable bench-seats and stare at the bowl of nacho chips.

“You can get free salsa, but the queso is better,” Colin explains. “Free refills. You can come in here and order like a taco for nothing, and gorge on the chips.”

Summer plucks a chip, dips it, and munches thoughtfully. So does Colin. The two don’t look at each other, and don’t precisely look at the bowl either.

Colin is the first to speak up. “The bad guys didn’t come outta the bathroom after you - after Radiance went inside. Are they, like, holed up in there?”

“They somehow … it’s hard to explain.” Summer thinks through her experience. “I think they opened a portal through space, outer space. I think somehow that bathrooms make the portal work for them.”

Colin arches his eyebrows. Finally he grins. “That’s gotta be the worst power ever.” His amusement makes Summer laugh too.

His follow-up question is more serious. “Is it always like that? As a superhero, I mean. Having to go fight someone or something you don’t know anything about, having to guess what they do, who they are, what they want? Worrying about all the y’know, civilians you left behind.”

Summer hears the sadness in the last few words. “The people around me always matter to me, whether I’m a superhero or not. Protecting them is the most important thing. But yes, it can be pretty random. I fought giant arm monsters, Doctor Infinity… uh, other stuff like that. I had to improvise a lot of it.”

They sample a few more chips. Colin struggles for a moment to find words, and Summer can see a sadness on his face.

“You’ve taught me a lot about robot intelligence, and science, since we started talking. I know I’m in over my head with this topic. I can’t get the science. You’ve been patient, but I’m just dumb. And you were right, I don’t even know for sure that there’s robots out there that need me. I’m so grateful for everything you’ve done for me, Summer, but it’s so much. It’s the work of a lifetime, just to learn what I need.”

Summer remembers Alycia’s words, predicting this very outcome. “Years of dedication, the utmost commitment.” And she remembers what Daph told her. “Colin can give up if it’s not working.”

“Leo’s so smart. He can be a superhero, and figure all this stuff out, and build, I mean, some really amazing people. Who can even fall in love with him. I’m … I gotta admit, I’m jealous of what that guy’s got going on.”

Summer realizes he’s not talking about Leo’s inventive genius. But she’s caught off-guard by his next question.

“So you said ‘Leo and I’. Your sister Aria didn’t help with all this science research stuff?” Colin asks, sounding a little surprised. “And how old was Leo when he built you then? I mean, if it’s okay to ask.”

“My sister and I used to be the same person. It’s - it’s complicated, please don’t ask me to get into it. But basically, in the last several months, something happened that caused us to become two people, with a shared set of memories up until that point.”

“And now she’s dating Leo.” Colin connects the dots glumly. “Were you… did you like Leo, before you two separated?”

“You could say I was born to love him,” Summer finally admits. “But we broke up a long time ago, before the - before Aria and I became a thing. And she got back with him, and I didn’t, by my own choice.”

“Do you still … feel anything for him?”

Summer tries to find a way to put it tactfully. “Leo’s really something. He’ll always be my best friend - it has to be that way, because of who he is to me. But he has Aria, and I want it that way. I’m doing my own thing, being my own person. But…. well, feelings don’t fade so easily.”

Colin is still struggling to catch up with the narrative, and his face reflects this. “… Yeah.”

Summer cringes when she hears what she says next. “Like your crush on Daph.”

Colin’s face twists in pain. He pulls his wallet out before she can form a coherent thought. He’s standing, unsteadily, and putting money on the table before she can even say his name. And he’s leaving. She rises and runs after him, uncertain of whether she deserves to. But she catches him at the door. She tries to grab his arm, but he yanks it away.

With nothing left, she grabs him around the waist, pressing up against his back. Her body is lighter by far than his - he could technically walk out of here, dragging her along, if he felt like it. But he freezes. Good.

Colin isn’t crying, but the hurt in his voice is clear. “That wasn’t cool.”

“I know, I know, I was stupid, it was so stupid. But please, just listen. When I found out that you had something for Daph, it really set something off inside me. Please, I need you to listen to who I am for a moment.”

She can feel him shiver in her grip, but he isn’t making a move to leave.

“Aria… asked Leo into a relationship. She beat me to it. We’ve always had conflicted feelings about him, and she just… resolved hers first. But there was someone else, another boy who told me he loved me, but he dated another girl, and y’know, over and over, I’m just everyone’s second choice. I’m the backup. I mean literally. Aria is the original, I just came alive one day, I’m a copy of her, I’ve never felt fully real, I’m not supposed to exist, so y’know, little stupid things like hearing that set me off, and I should be tougher, but I’m not…”

She realizes that at some point in her speech, Colin turned around in the confines of her grip, and is now wrapping his arms around her in a warm, tight hug. She leans into it, burying her face in his chest. “Please, be patient with me, please, I’m a wreck, I’m sorry. You shouldn’t have to put up with me, I’m sorry…”

She feels a hand stroking her hair, and she forces herself to stop blubbering. What she wants to ask for has to be heard clearly. “Please don’t give up on me. I just need a little more time.”

She hears Colin’s voice in her ear. “I won’t give up on you. I’ll be patient.” There’s a pause. “Uh, it looks like they brought our tacos.”

She laughs, and chokes back tears, and nods, and smiles up into his eyes. At that moment, he looks ready to kiss her, and she’s thrilled and afraid. But she’s not ready, and he can see it, and the moment passes.

Back at the table, after a few bites of taco to fill their mouths with something other than dumb things to say, Colin finally gets the courage to continue the conversation.

“When you brought up the thing with Daph, I thought you were making fun of me. Because I’m useless. Daph was interested in Marion, and he liked her, and I never had a chance. My cousin was bullied, and I wanted to help her, but she helped herself first. And now you’re telling me that it’ll take years to really understand the issue I’m drawn to.” The boy shrugs helplessly and stares at the cheese dip. “But then you told me that stuff, about being a backup. But y’know, that’s me too. I’d never give up on someone who felt that way, 'cause I know how much it’d hurt if it was me.”

Summer feels a warm feeling of gratitude. She nods, and savors the feeling, and a thought occurs to her. “Don’t give up on your goal either. Maybe you don’t need to know the science. You’re a pretty empathic guy. Maybe a softer approach works better for you. If you, I dunno, interacted with a non-biological entity directly, maybe you could learn something about personhood.”

Colin tries to process this for a moment. “Oh. Oh. Duh, you’re a superhero. You must know dozens of things like this. Uh, I can try it.”

“Three from space, and one from cyberspace,” Summer grins. “Plus a telepath.”

And as she starts to tell him about the Concordance agents, and Jason’s AIs, and the personhood examiner Edith Warburton, she can see the energy returning to him. He’s sitting up straighter, smiling, looking at her without hesitation. He’s happy again.

This is going to work. 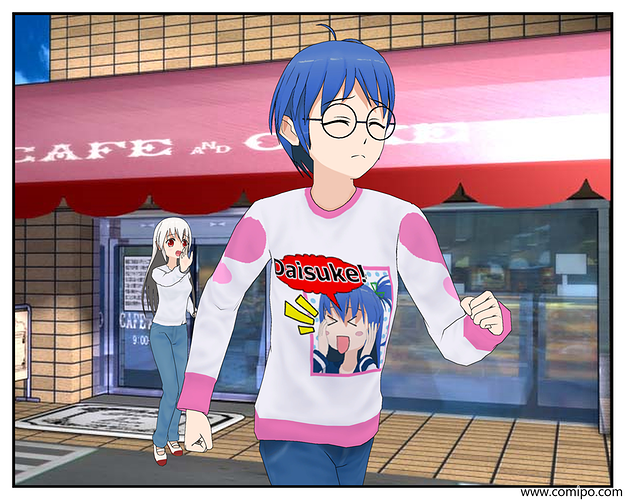 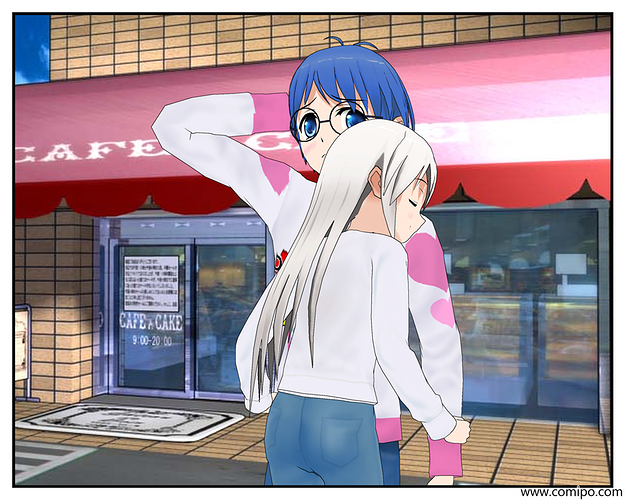