Demigods Session 5 - The Tale of the Very Large Fish

Kamaka - gender identity now associates with the element closest to them. Last session Kamaka was wandering the wilderness, underwater, off on surf boards, dealing with themself, because that’s new and weird. 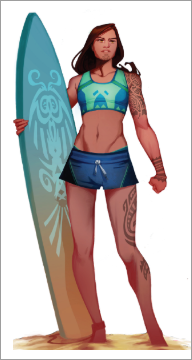 Damien and Lex (the latter in a very nice dress). There were issues.

Lex: Dammit, she’s evil. We;ll have to save this guy from her!
Damien: What’s this about, Abena?
A - If you promise to stay, I’ll tell you.
L - Don’t make that promise!
D - I promise to stay. Lex, get outta here!

Lex gets up, but dress does not.
Sean tries to do the honorable thing, grabs his coat to provide coverage. Or restraint. 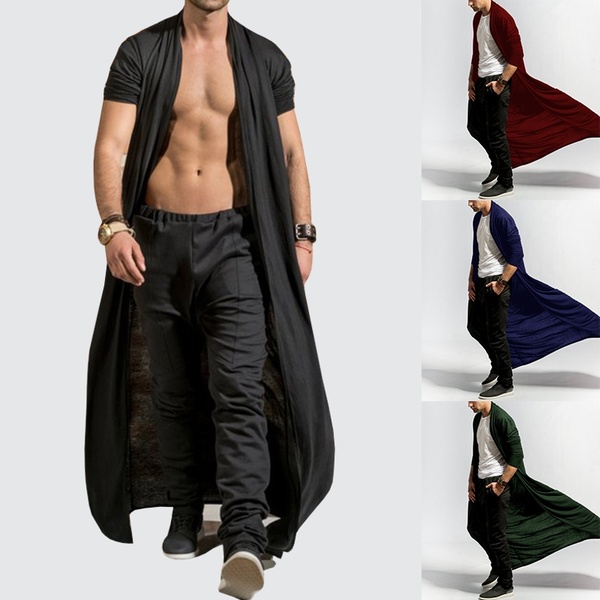 Smite Your Enemies -> 10! Hand on shoulder with Damien, don’t do anything stupid (DON"T FIGHT ME) as she hip-tosses him into the portal.

Meanwhile, Back at the Kronos HQ …

And Kamaka … a Darkness Moving in the Face of the Deep, carrying Kamaka to carry him back to the building itself, half a block away when the explosion happens.
The kayak washes up to the building on the wave he’s summoned. 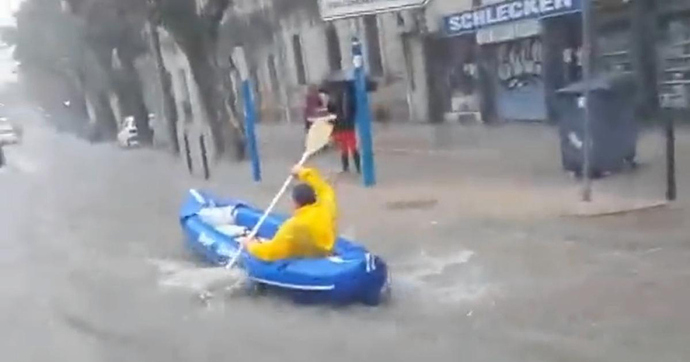 H - We got word about a big attack. Damien decided to go on a date night. Glad you’re here because we can’t get back in the building. Lex put up a barrier.

Find the explosion … created a hole in the side of the building, creating a new entrance. And five more tactical sharks are just inside, and open fire on S & K as they come in. 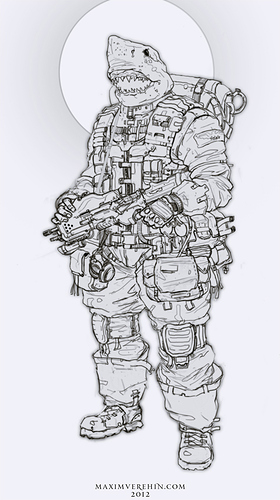 Kamaka shifts to earth-metal form in a smooth punch.

Swipe Left -> 8! … smash ground, knocked down, but unharmed.
Epic Weapon > Smite Enemies choice … take something from the enemy (their attack, to protect Surya).

Surya wheels in to go at them on their heelies.

Haruki … with Lex and Damien

Security alarm going off. Something on the roof, but cameras show nothing weird.

Lex and Haruki go to the elevator.
Damien is staying behind to monitor security. Lex is snarky.

Lex checks the pockets
Befuddling charm, that had effects on both Lex and Damien. 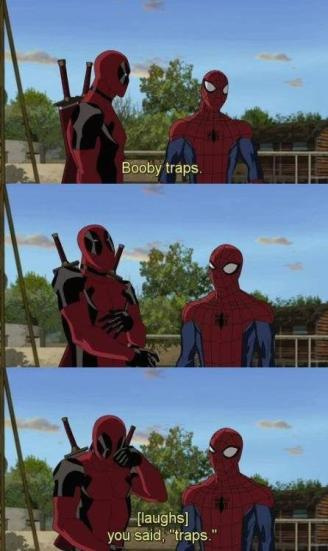 Nobody sees anything. At first.
Constellation are moving. And one is moving toward them. A sea monster. Maw of a giant sea creature. 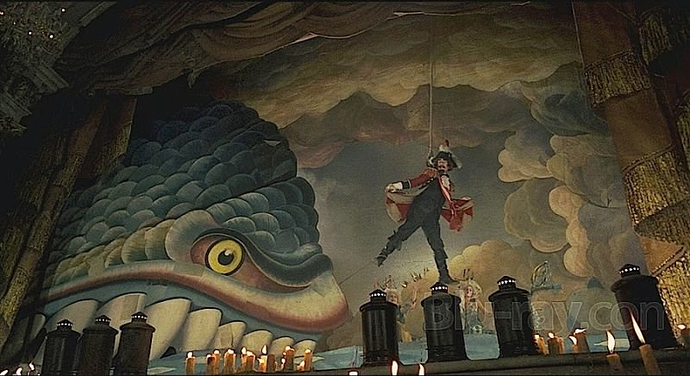 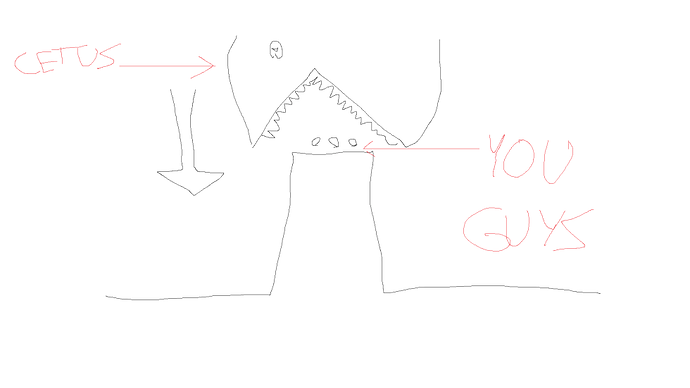 By them, we mean the entire building. 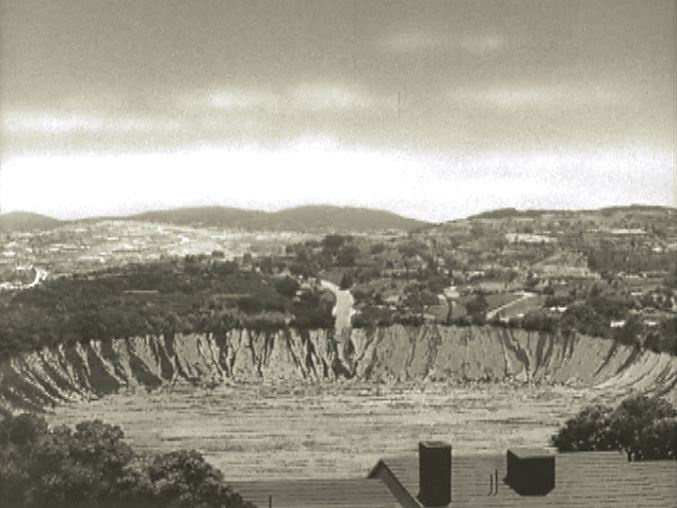 It now considers itself mortal.

Kamaka … being epic … winding up the weird, Bend Fate … spend Thread -> 11!
boon = Shattering the outer shell of building, the stone bits, rending into missiles in all directions.
boon = fate’s favor to Surya.
bane = immobile / oblivious to what’s going on around (concentration).

Surya … borrows Kamaka’s hammer, and using it as bat to hit those fragments deep into the creature.
Smite. Fate’s Favor -> 12!

The leviathan definitely feels pain. As a mortal.

Damien
sing … “You have been betrayed. Go back and take your vengeance on the one who sent you.”
Sway -> 9!
Epic!
Okay, fine, but demands a price.
Swallowing the building a bit further … translucent … a skeleton of stars and constellations … swimming in the night sky … toward parts unknown. 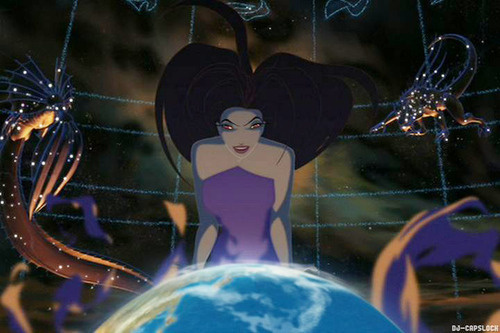 Meanwhile, the fish disgorges the remains of the building.

A voice, Uranus, the Sky, looks down at us … “WHAT ARE YOU DOING HERE?” 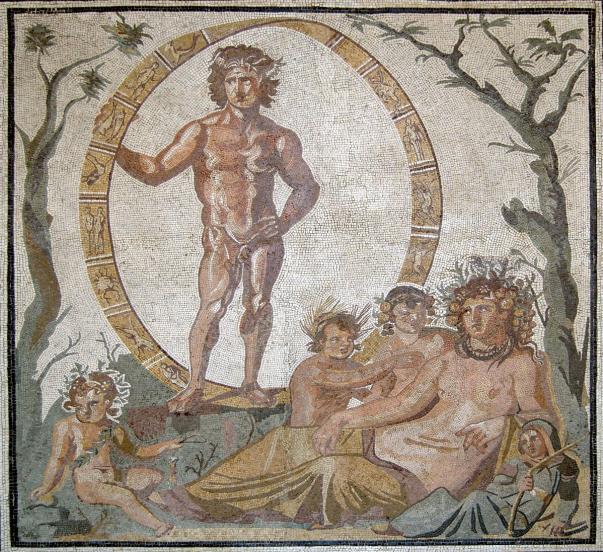 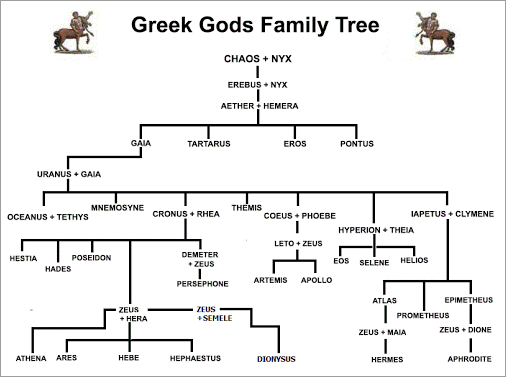 D We were brought here by this great fish, sent to attack us.
Giant hand reaches down and pets it.
U Why are you interfering?
L Why are you screwing with your son?
K We were tasked to protect this building by Kronos. Who gets to tell us stuff.
U What about me?
D What are you telling us?
U You could walk away.
K Are you telling us that?
U Yeah.
S Oh great god … if we might ask why … might we humble mortals ask why …
U You might not know about our history. Our family doesn’t get along very well. 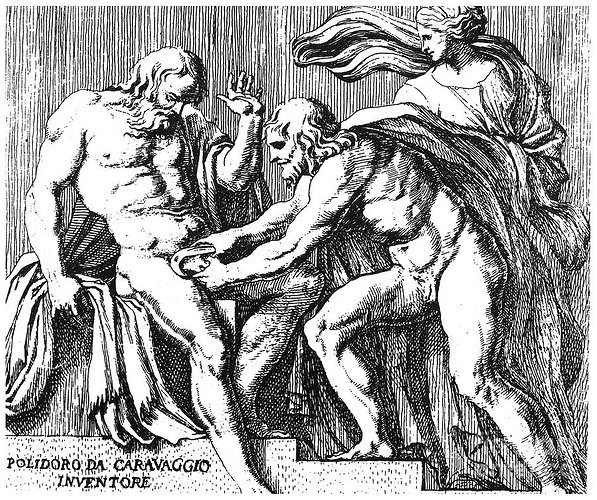 K You all make it practically impossible to act like any kind of sane / decent person, we have to do both things we are told. If can’t figure that out, will do what makes sense to meet the promise we made.
Ascendance Move - (Goes over and picks up the building and starts to walk off.)
[Perm Consequence - Judgment -1]

U (slams foot down, shakes mountain)

D - Ascendance: Kamaka is right (restate). We can move mouintains, or buildings off of mountains. AID EVERYONE! [Consequence: Mortals flock to me for autographs.]

K Perform under Pressure -> Fates Favor -> 14! (and doubles!)
Get it done. No problem.
The bones/skeleton/skin come lose from the fish, and fall with the bulding, draping it, forming a new exterior. 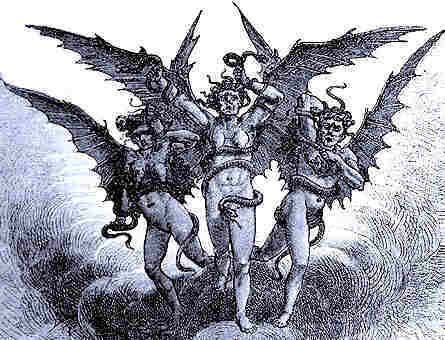 And, yeah, there’s been a murder (of the fish), and an oath-breaking (disobeying U’s dictate).
They scythe down Surya and Kamaka.

H - Ascendence … BECOMES DEATH. Aspects of ancestors and father. Deformed, but older and enjoying himself, father has foothold in him. [Consequence: See spirits of dead all the time now.]
H - “These are not yours. You do not get to decide their fate.”
Scythe in the reverse direction, so they stand up.

D - O Furies, we’re not oathbreakers or murderers. We obeyed an oath we swore to Kronos. This mighty fish was slain only after it attacked us. We appeal to your judgement.
H - blows joint smoke. Go in peace (with lust for life)
Sway -> 13!

The Furies retreat. Corruption of the order as they understand it.

S interposing against U, keeping him pinned down. [Consequence: Reduce max harm to 6 boxes]

L I’m cold.
S You’re just wearing a jacket.
L And whose fault is that?
S Yours. And Damien’s.

D My greatest regrets this happened, great-great.
U Children are a curse. [Which sounds like it is.]

The building has this skin. It’s magical, only visible to us.
Photographers love it.

We know when he enters the building. With a train of restored gods and goddesses, esconced in their offices and rooms around the building. He wants to see all of us.

Kronos - gives us shares in various corporations and so forth … lots of money for us.
Very clear that we can ask for favors from anyone he brought back.
Which we might regret.

Hey … we can restore the Coco Palms. 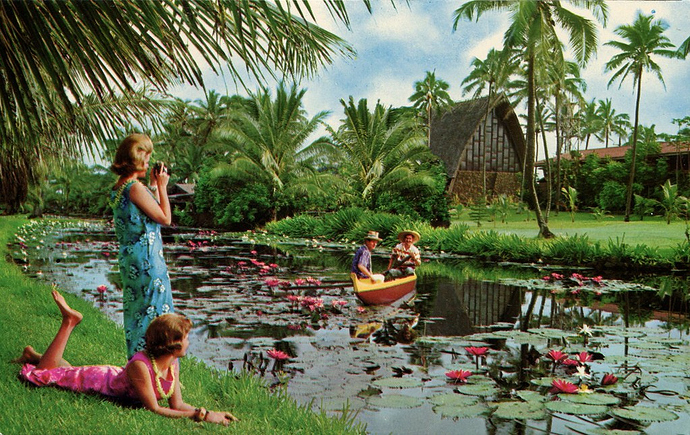 H period of adjustment to seeing dead people. Coco Palms. Visiting family shrines in Japan. Coronavirus thing is not good for the family.

D invites Lex to a dinner he preps as an apology for dragging her into this. L has so many regrets that Sean is dumb as a box of rocks and not nearly as charming.
And that will be a chance to spring that favor. Something her father wanted. (And he always wants things, and the goal posts move.)
D - Well, I’m kind of busy right now, and …
(Autograph fans at the window.)

K sees the location spirit of the place. Dives into the Spindle and doubles down with that.
S helping K … hanging out, bonding.
(Which doubly stresses K)
S asking K for a rematch … road trip! … classic anime ending as they race toward each other. 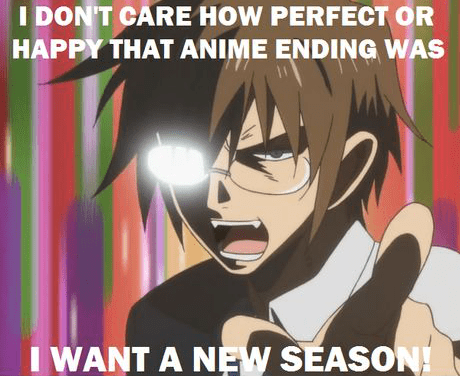 One meta note to the team: Thanks so much for everyone coming up with characters with different first initials. It made taking notes much easier. 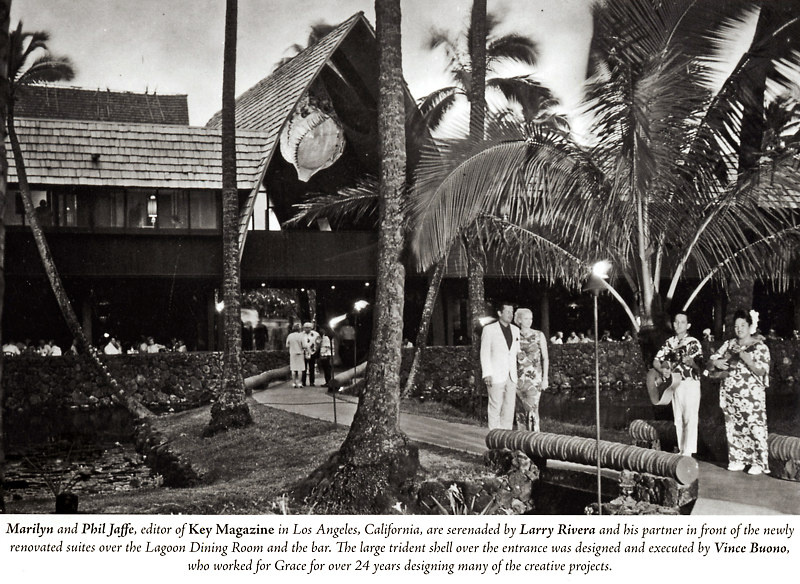 So what was Abena’s deal? Spoilers within.

If anyone has any other plot threads or details they’re curious about, I will dish details.

I will confess that, in addition to the (unfulfilled as events overtook us) intent to call Abena during the battle, my initial thought on the concluding shot was meeting her for dinner somewhere (with, if rolls and/or narration were successful, would end fourth-wall-breaking grin).

But having an apology / thanks dinner to Lex felt more natural, engaged my comrades, and provided just as humorous an opportunity.

She would definitely be good S.2 material.

K You all make it practically impossible to act like any kind of sane / decent person, we have to do both things we are told. If can’t figure that out, will do what makes sense to meet the promise we made.
Ascendance Move - (Goes over and picks up the building and starts to walk off.)
[Perm Consequence - Judgment -1]

U (slams foot down, shakes mountain)

D - Ascendance: Kamaka is right (restate). We can move mouintains, or buildings off of mountains. AID EVERYONE! [Consequence: Mortals flock to me for autographs.]

K Perform under Pressure -> Fates Favor -> 14! (and doubles!)
Get it done. No problem.
The bones/skeleton/skin come lose from the fish, and fall with the bulding, draping it, forming a new exterior.

psst @Dave (I also had by ascendance in here. Doing the reverse shockwaves to Uranus, defending Kamaka. That was the ascendance not keeping U pinned down later (That was just a nice bonus Bill let me have I guess). Consequence Reduce max Harm to 6 boxes.)

You’re right – the combo of note-taking and formulating play here exceeded my capacity in the moment, esp. as the sequence of play sometimes got a little muddled. I remember just what you’re mentioning, failed to write it down because of the next thing that popped up, and then when I later remembered your A move, misapplied it to something I had written.

Quite understandable. I will say that I and probably others appreciate your note taking.

Funnily enough, I was the only person who did not use an Ascension move, despite thinking about cool stuff to do if Abena or Sean turned out to be actively threatening. And once the building was eaten, I definitely did not want to spoil events by just having the building’s fate never to have been eaten by Cetus. Besides, I think I kept Dave from getting answers long enough at that point.

It is, as I’ve mentioned, in part a focusing device; I do the same in meetings at work.

The biggest problem I have is that sometimes it’s tough taking good notes while actually doing game stuff with my character (or planning same) (let alone doing GIF lookups, too). Sometimes, ironically, my notes for my own character’s actions are more sketchy that those for others.

That said, I enjoy doing it, and enjoy being able to contribute that way.

Damien thought he was being both noble and clever in trying to get Lex out of danger, esp. since he thought she would be more help back at the KHQ than he would be and it would give him a chance to question / sway Abena, which he was (over)confident he could do.

my notes for my own character’s actions are more sketchy that those for others.

I keep notes for the Sycamour Masks game I’m in on Saturdays, and that’s 100% my experience as well. “Nick does some stuff” is sometimes all I can manage.

Yeah, one reason I try to post the notes ASAP (the evening of the game) is so that I can go back and fill in some of that stuff.