The job is a wrap, and we’re landing on Warren, the cluster capital. Multi-layered cityscape, the bottom levels dark and smoggy. Drifter is piloting. Kei, Armin, too, in the cockpit. Landing straight down. Rendezvous with delivery (a heavy cask, .5m long) is down in the lower city. 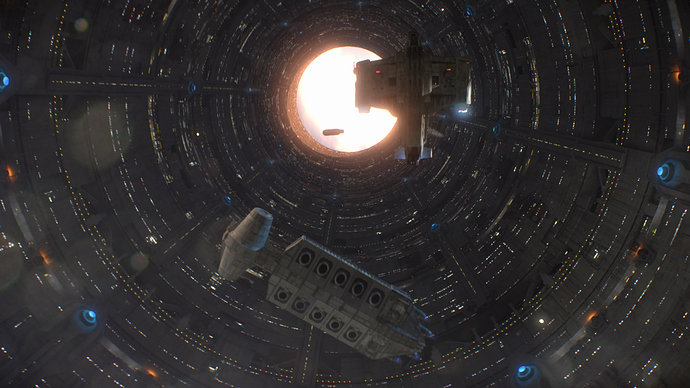 Katani, our infobroker - We’re of value because we know how to fly without being spotted. Want the package brought in without notice. The ship looks a bit worn around the edges … underestimated.

Coming down into the muck. Kei is up in the cockpit because just like to get a view of the topography.

Monster is doing pull-ups under some stairs.

Rebreathers. Out of the lift, onto the streets.

Going to Taffy’s Bar. The area is well-populated, lower income, strong identity. People on the streets (in rebreathers). Open-front shops.

Bar and grill. Monster is carrying the goods (of course). Instructions are to ask at the bar for Mr Smith. Kei walks to the bar.

Bartender is talking to some folk in uniform. 3 of them. Green/black - House Malkaith (governor’s forces). And another table with two others, clearly off-duty, eating protein-on-a-stick. Yes, it’s a cop bar. 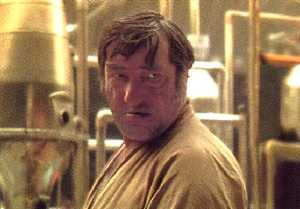 Mr Smith? Points out a side room with a drape. Step in.

Armin observes, guy is well dressed or not a power player. Nice clothes, but off the rack, not bespoke. Also kinda scruffy unshaven.

Aaaaaand his throat’s been cut.

Armin heading out the door.

Has his medkit. Used to dealing with bodies in bars, given Monster.

Armin did a nope-about-turn and out the curtains. Which draws some police attention. Takes in sitch. Goes to bar. Orders drinks. Can you break a hundred? Just buy a round for everybody. Get 'em drunk.

[Desperate/Standard, with a Gambit --> 6! +XP to action’s attribute]

Drinks for a bunch of cops going off-shift, so drinking deep. Starts up mutual conversations. Seem pleased. Asks for strong drinks for their table. No food.

Drifter - Armin seems to have the cops in hand. Ducks back in booth.

Seon and Kei - Deep, single cut, through the throat. Perfect line marred by bouncing off vertabrae.

Kei - blood spray patterns from hand weapons – remembers, not an archaeological find, but a site where two sets of treasure hunters went at each other with trowels. Uses plastic sword from the startini, that it was a surprise strike straight from the sheathe.

Seon - in the last half-hour.

Guy looks corporate. So payoff would be digital transfer.

Armin - There’s an aircar landing on the street outside. And people outside are paying attention. Returns with shot glasses with round bottoms (“tumbles”) - poured and handed to you so you have to take the shot.

Armin shakes some booze onto the guy. Let’s go while we still have the thing we were supposed to bring to him. Covering up what’s happened to the body. [Group Help: Skulk - Armin 4+4, + Kei, Monster, Seon, Drifter … all 1s and 2s --> 4 stress on Armin] 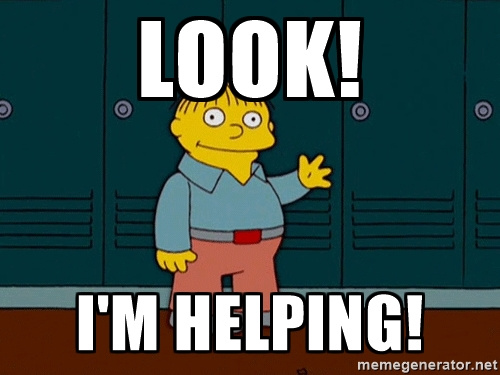 Monster - arranging the body to look like he was ready to fight.

Kei - complaining too loudly about the waste of good booze. 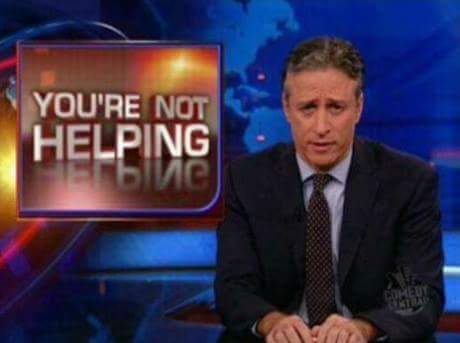 See the aircar landing in the street. An APC with gun on the top. 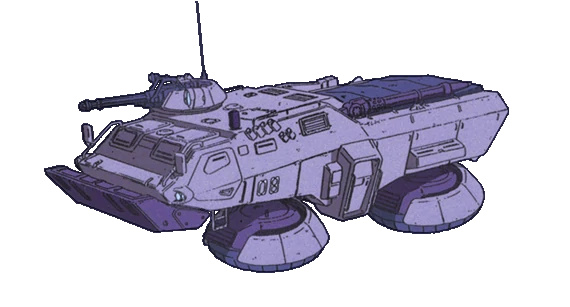 You know it’s a cop bar because the music is the “Kung Fury” soundtrack. And uh, if you haven’t already seen Kung Fury, go do so here, it’s gloriously excessively 80’s.

It is a ridiculously fun movie. If I even play Shadow of the Century, it’s going to be one of my touchstones. The sequel is in production and added more 80’s with Schwarzenegger.

Armin did a nope-about-turn and out the curtains. Which draws some police attention. Takes in sitch. Goes to bar. Orders drinks. Can you break a hundred? Just buy a round for everybody. Get 'em drunk.

[Desperate/Standard, with a Gambit --> 6! +XP to action’s attribute]

Worth noting that this was going to be a Risky / Limited test, and Mike pushed Risky down to Desperate so he could turn around and push Limited results up to Standard. A good move that paid off.