We are still in the Ur Ruin (is it a ship? does it just resemble one?).

Kei is reacting, which Monster is paying attention to.

The whole place is vibrating, and apparently firing weapons (per Drifter). “Someone’s shootin’ at somethin’.”

Armin just had a ghost pass through him. Pause. “Oh, no, I couldn’t have been the only one who saw that.” 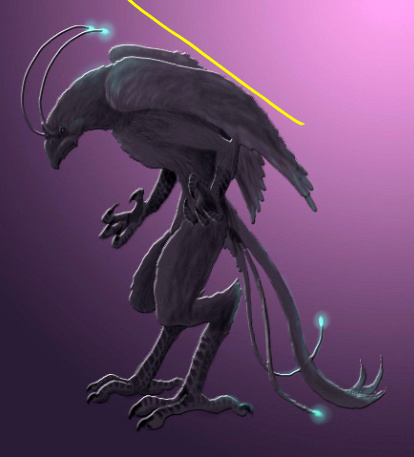 The ship gets quiet. Armin drops to a mutter. But the key is still humming.

Kei … is their architecture-sense altered by the concept of something firing?

Have we ever seen an Ur ship? There is speculation that such tech has been found and secreted away by Those In Power, and that’s how people figured out the gates and ships and so forth.

On the other hand, a lot of folk would be really upset if someone asserted that Ur ships were armed, as the Ur clearly were far more advanced and therefore utterly peaceful …

Seon … would he notice Armin’s agitation? Goes over and checks him out.
Armin is “I’m hallucinating. Give me pills.”
Fine bedside manner is stabbing Armin with the hypo in mid-discussion.
Treatment -> 5!

Humans are social creatures, instinctively. We are stronger together than apart, and it affects our architecture and society.
But the Ur … did have gatherings, but not necessarily by instinct. By will or choice. Sort of like cats.
Which hunted birds.

We need to find the command center. Onward ho!

Moving along carefully. Armin leads on the Skulk. Risky-Standard.
Armin -> 2
Monster -> 3,3
Drifter -> 6
Seon -> 1
Kei -> 1
Armin takes 4 stress, as people keep pulling him back from danger.
2 ticks on the “Infiltrating the Memish Ruins” clock.

As get closer to the center of the ship, looks more streamlined / alien / hi-tech.
Way Presence … Kei gets
Monster … is the Key responding to this, or he is and is projecting, or just imagining it. (When gets the key out, it’s not resonating like before … but definitely reacting … humming … on and waiting. It’s not about to pounce, but its ears are pricked up.

The door goes up, but both into the wall and folds into itself like Origami. Slight shift of air. Definitely the CiC. The “front” is the center.
Outer walls … grooves. Stasis pods? Accel couches? But no straps or covers.
Center of room: More like accel couches? Larger than a normal person. Like petals around a console … which resonates and causes the Key to resonate.

The couch on the right is occupied.
Kei: “Put on rebreathers before we go one step further. Also, don’t touch anything, esp. that (pointing to couch).”

image.jpg1500×574 262 KB
Looks like Armin’s bird.
Kei is impressed that it hasn’t fallen into powder. Can’t touch, hard to even get close to videograph.

Console … Collarbone-sized plinth … something that looks a lot like another key.

Active panels in the room, too.

Incredible fortune in front of us.

Word will get out … if Quarrel hasn’t already called his friends, he will, unless we kill him.
And if we don’t want the government to take it and hide it away, be big and public. Which also helps us.

Starsmith Guild. Lay claim on behalf of the Starsmiths Guild.

But Kei gets to publish first.

We auction all the bits off.
Lay claim … 8 cred finders fee … passing on to the Memish … lots of money changing hands to make sure everyone gets treated fairly … down to 2 cred.

+2 cred. Don’t skip upkeep this time. -1 cred.
Heat: 1 (for being “famous”)
Wanted: NA
Entanglements: Fortune 6 … 3 … Resistance and aggression through proxies towards us where dirty laundry about everyone to try and invalidate our claim. … Kei offers up more bribes from her stash.

Downtime activities next time … purchase assets for the next job.