Lots of clocks. Lots of factions. 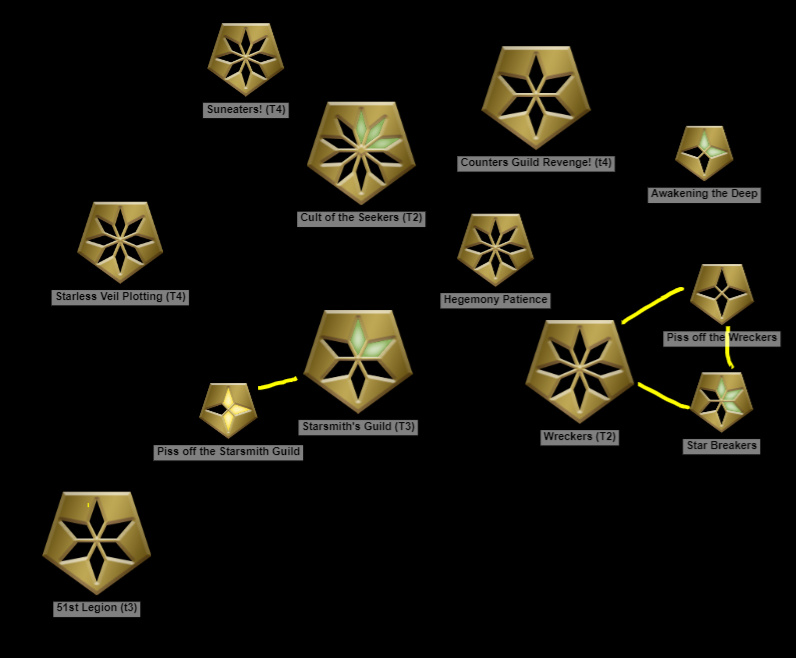 clocks.PNG.jpg796×658 87.5 KB
Wreckers: Roll a 5 on their Dreadnought upgrades. Oh, and they want to upgrade their weaponry. With the Ur-ship. They will be at the auction.

51st Legion - Potential complications. If there is Hegemony Intervention.

Cult of the Seekers - Ur tech! Also, interested in us because they know stuff about us.

Counters Guild - wanting to put a bullet in Armin’s brain for stealing the ship.

And, of course, the Deep waits for awakening.

Quarrel also knows what is going on.

Also the Memmesh … who aren’t an interplanetary faction, but might be tied with the Deep. 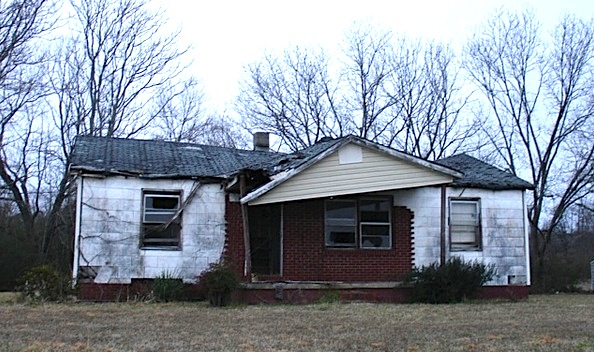 Insight Training
Resolve Training
… when you train, you get an extra tick.

Working with contact to have a safe spot for the auction. +1, working with a friend.
Ties into vice – a debauchery version of a wine tasting tour with the ambassador.
T1 … Fortune -> 4,5

… a lightly defended super-pontoon / monster yacht, floating above the claim area. (And, of course, the Deep.) Decent air defenses. Not much in the way of water defenses.

Take some time, clear his head, get over everything before the auction. Recovery ->

Locks self in the closet where we have privacy, going through hours of footage to write up the initial paper to public before anyone else can. Get out the white paper / precis. Footnotes to claim the territory. 20 hours for those few, short papers.
Indulging the vice! -> 1
Frim as friend? +1 die. -> 1

Second roll? Publishing … strengthening a relationship with the Cult of the Seekers?
“Academic Glory” as a 0-weight piece of equipment. 4-clock.
Study -> 4! 2 ticks on the clock.

Mix - Yatu the gang boss … odd jobs, rumors, plus vice, and Yatu gives the advice. -> 5
Rumors …
Counters Guild is interested in Armin, a “rogue member” who used CG info to find the auction item. Not killing … more like bringing him back to make an example of, maybe invalidate the whole auction.

And throw a chair.
He’s fighting to to get information. Monster is fighting as a sign of deep friendship.

And so happy about meeting his friend Chon-Zek, and leaving him resting in that drink fridge … bumping up Resolve 2 pts to increase Attune.

Introducing combos of food in a bar brawl.
Also, can introduce him to his dear friend Chon-zek.

Chon-zek is clearly taking this very seriously. Monster is more like Oliver Platt in the 3 Musketeers.

The groundwork has been laid. Social job.

We start off with everyone there, not going already into saber rattling and so forth.

Cult of the Seekers … have send down reps.

Dreadnought, bottom at thunderhead height. As people begin to assemble, the Wreckers descend with their new dreadnought into the middle atmo. 30,000 feet. They are directly over the gathering. 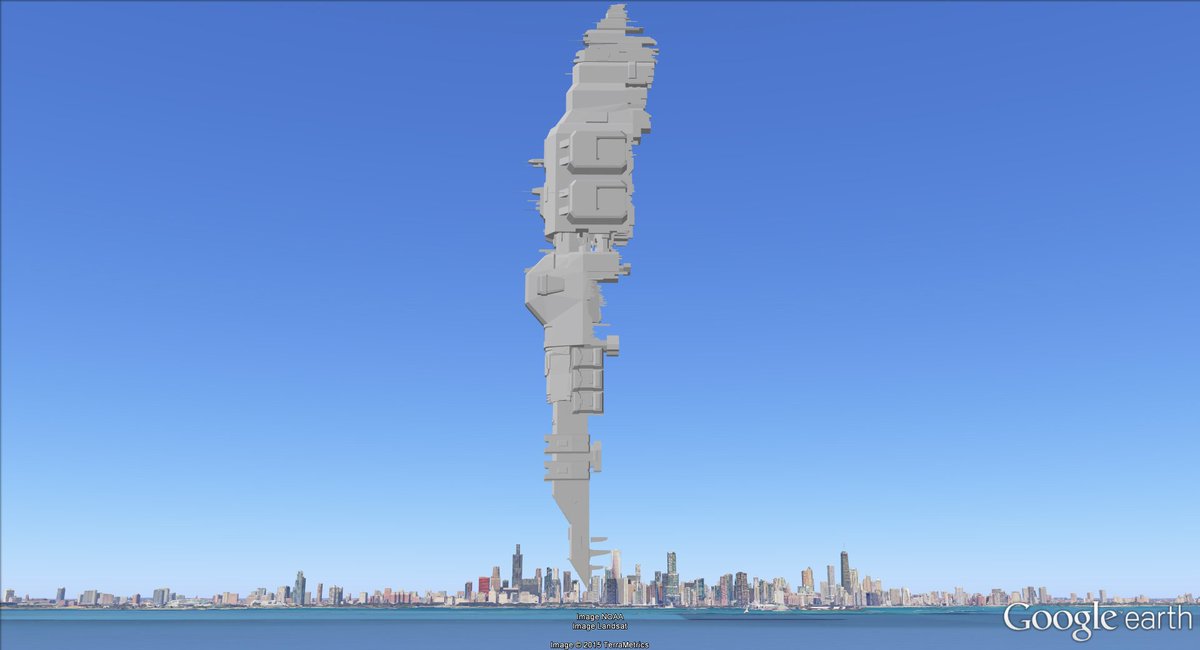 Instant cacophany and protestations and gawking and pissiness.

“Bid for whatever you want to, we want the guns.”

Drifter has the ship and is under the water.

Armin: Are they lying?
Yeah, they are clearly not ready to shoot. And they have families aboard. So they want something else.

Meanwhile, Monster is Commanding … “You need to back off or else find out what we did to engines when gave to you.” Flashback to Drifter and Sion working on the engines.
Command (Drifter, Seon, Assisting) [2 stress taken by Drifter]
(Tweak knob on remote control. Engines fluctuate.) +1d
Scary – added Potency, so …

Drifter - stuff going on in the ocean. (Kei is there, too.) (As are the Keys)
Skulk from Kei, Helm by Drifter
1-stress flashback to watching Drifter practice drifting naturally.
+2 stress push.

Find submersible drones zipping around down there … Wreckers tech. They are after the keys.

Shift two ticks … against Wreckers. (Tightbeam broadcast … get those things out of my ocean.)

Starsmiths Guild coming to the pontoon ship. Lots of surrepticious glances around the audience. All the factions seem to be here.

Ship is able to monitor what is going on upstairs.

So … Armin … what / how are we actually auctioning this?
Submit your offers on what you want. The whole thing? Parts?
Min-max the profits.

Tilting the field toward any faction? So since Armin knows about the Counters Guild … he picks his contact’s lackey to call out … “And I know you aren’t here for the ship.” Wants to push their clock forward.
Sway --> C/S, but 3 tiers down, so Desperate / Limited. But clothes and ID.
“But of the CG wants to bid, I’ll be over there in that hut with my associate.”
Monster waves at them. Assist.

Bids and proposals start coming in …

Hegemony only wants this pieced out.
Star Breakers shut down again … not pleased.

And the mission is done! 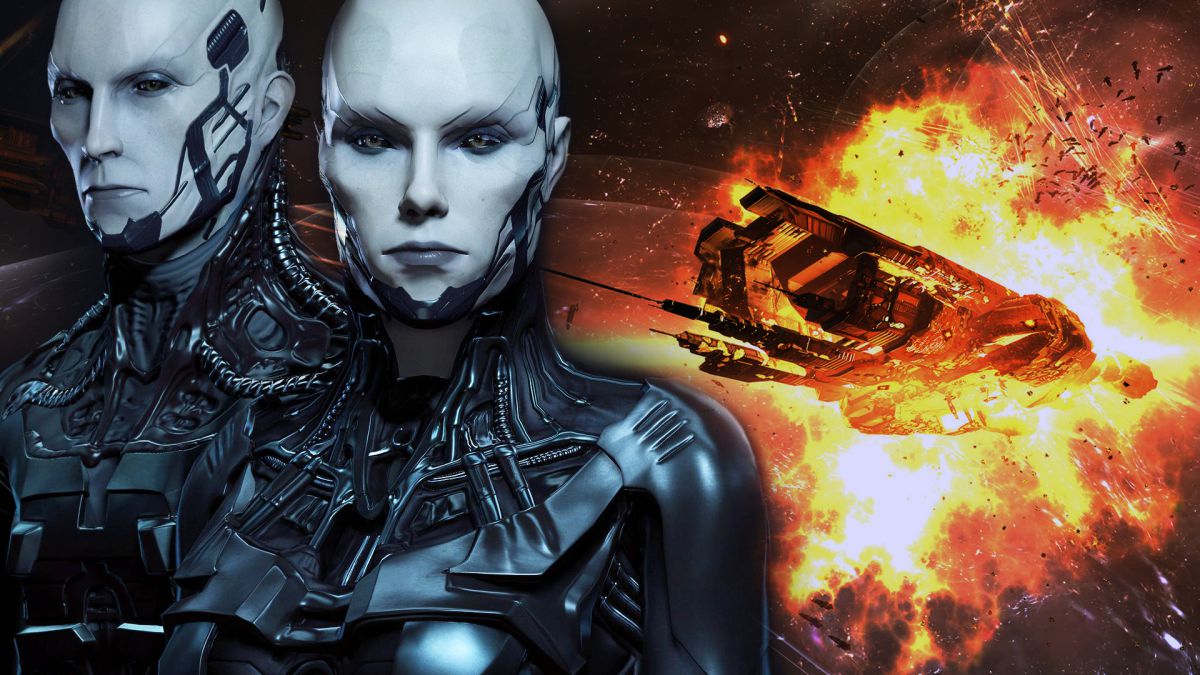 EVE Online is in chaos after an unprecedented alien invasion

All of EVE Online's player-run empires are scrambling to defend their territory from a full-scale siege.

On Wednesday afternoon, thousands of players across the lawless regions of null-sec space, where EVE Online’s fabled player-created empires battle for supremacy, were ambushed by fleets belonging to a mysterious non-player faction known as Drifters.

The Starsmith’s Guide put their bidding power into the intelligent systems of the ship. Nothing immediate happens, but about three months later, the Rin-Holt gate achieve a new “harmonic order of stability.” Whatever that means.

The Wreckers and the 51st Legion chest-thumped at each other over the weapons and defense systems on the ship, with the wreckers coming out well on defensive systems they don’t understand, and the 51st Legion getting the larger share of weapons they don’t understand… which a few months later rumors reported had been … shifted … to the larger Hegemony.

The Counter’s Guild did not bid significantly on anything but research rights, which they farmed out to various Universities, some of which were in-system and on Mem. In fact, their overall presence in the system spiked considerably in the half-year following the Auction, possible coincident to Armin’s new noble rank on a local planet. (Armin might end up spending a lot more time in the (entirely unpleasant but quite easily defended) barony he now commands…)

Memish uprisings and general anti-Hegemonic activity is much higher than before the Auction. Seems like their are some radicals on planet, stirring them up.