The Serpentine River style is a common sword style found throughout the land. It combines flashy flourishes, deceptive feints, and quick thrusts. The practitioner’s goal is to dissuade opponents from fighting them by looking dangerous and impressive, but if a fight breaks out, the style can demoralize an enemy just as easily as kill them.

Bill, I appreciate that you described a style that it makes sense that both Silent Sun and Zemin would learn–Silent Sun presumably because of it’s ability to dissuade conflict and Zemin because it is flashy. Good job.

Barring input from @Dave, I’m assuming Bao’s style looks like the cook from Warriors of Virtue. 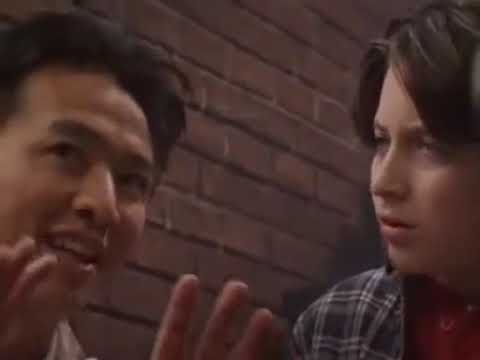 The Serpentine River style is a common sword style found throughout the land. It combines flashy flourishes, deceptive feints, and quick thrusts.

I’ve got more to write up about this, mostly to flesh out some NPC styles.

@Margie - Take a peek, if you have reading time, at CJ Cherryh’s “Paladin” - there’s a swordwoman in there who takes a very strength-based sword style and adapts it into something that suits her better - I wonder if that wouldn’t reflect how Sky Daughter Shu adapted her brother’s style (he favors a monster two-handed straight sword) - probably much to his disapproval. (Her adapted style in Paladin strongly reminded me of T’ai Chi sword forms.)

More specifically, as with the chef in the clip, that’s how he cooks, broad and wild gestures of power and apparent chaos that turn into unexpectedly precise results, use of whatever tools are available, etc. Extending that to actual combat is a very small step, while perhaps having a bit of Jackie Chan-esque “panicky look” in the process as he seemingly flails about with whatever is at hand (“I’m a chef, not a warrior!”)

The Yellow Hill stye is a style practiced by some criminal gangs, much to the shame of the monks who first developed it. It’s physical style that features big leaps, and using terrain improvised or common weapons to advantage. It’s visually surprising, and its signature moves are easy to identify, making a practitioner’s training clear.

Indigo Dawning Ritual was, if not developed, expanded by Two-handed Zhi. While it is a complex style, the basics can be taught and drilled easily, making it an ideal style for spear- or guandao-armed militia, Zhi’s primary responsibility to the province.

Some of the moves Two-handed Zhi has displayed, if not taught:

The Preparation of the Excellent Feast style, is a collaborative art of the Prosperous Dining Society, a consortium of culinary artists of the realm who believe that, in addition to the standard judgment of creativity, cooking execution, and presentation, a key component of any meal should be performance.

Thus, most of their techniques are designed to provide maximum enjoyment for those who observe the cooking and preparation process, to make the preparation of a meal seem like a magical miracle (as, philosophers of cooking would assert, it is). At the same time, there are potential martial applications to such practices that, in the hands of a master, can counter those who seek to do harm to the chef or to the occasion that they are making preparation for.

Given the breadth of culinary technique – and, again, bearing in mind that the style involved refers to methods of preparation and delivery of food, not combat – much of this style is improvisational, and what common forms there are vary significantly in execution from chef to chef. Fiery Perfection Bao’s most common moves are largely derived from the teaching of his father, Fiery Perfection Zheng, but show variations based on his youth, his insouciance, and his particular focuses upon the art.

The key martial techniques which have been adopted by Lung Zheng and his son Bao, from the Prosperous Dining Society’s style, are:

The Mellifluous Cacophony of the Butcher’s Block: This involves a flurry of knives (as many as are available or needed), shuffled in various directions, until they are all, unexpectedly, flying toward an attacker.

The Rhythmic Array of the Preparation Table: This move deals with the use of various cooking implements (tenderizers, serving spoons, ladles, spatulas, etc.) both to create a distracting set of sounds and motion, but to then be applied to various points of an attacker’s anatomy in such a way as befits their culinary purpose – hammering, scooping, drawing in different directions, flipping to one side or the other – or, if the imagination fails before the threat, as cudgels against key tenderizing points.

This style is deemed particularly effective if a rhythmic sound is set up by interposing blows against the opponent with rapid deflection against nearby surfaces.

The Single Chopstick / The Stirring of the Dragon’s Tea: In recognition that some chefs may be engaged in combat outside of the kitchen, especially upon the road between towns or between their employment and their dwelling, this technique teaches the use of the walking stick as a tool to pick up, spear, swirl, or otherwise deal with an attacker. A variation, The Turtle Upon the Pier, makes use of those occasions when a traveling chef has a small pot hanging upon their walking stick, and makes use of it as the offensive version of that creature’s defensive carapice.

The Unexpectedly Offended Expression of Noble Outrage: This is an array of techniques used to take hot or boiling liquids at hand and project them in a spray or stream at an attacker. These liquids could be anything from tea, to a hot stew, to a pot of spicy sauce, to a simple vessel of boiling water. The technique focuses not just on the targeting of such projected liquids/compounds, but to the areas of effect of such assaults (a broad spray, a focused stream, the targeting of body locations, the spreading across a floor).

The Effervescent Minding of the Station: As a worker within a kitchen must often occupy or man multiple stations, and move from one point to another, in constricted space, without interfering with the dutiful functions of other such workers, this technique focuses as a primarily defensive one, to avoid collisions, interferences with the movements or chopping motions of others, the leaping around or past barriers while appearing to move in a straight line, the movement in vectors that do not necessarily mind the pull of gravity, and, for advanced practitioners, the seeming occupation of multiple locations at once.

The Winds of Zhulong: As someone who partakes of some foods carries on their breath the odor of such foods, sometimes causing offense, so the chef who understands the proper ingredients to consume can produce a breath containing the properties of such ingredients, be they oppressive, seductive, corrosive, or, in myths that are told, of flaming destruction.

The Alchemist’s Repast: There are those who equate cooking with the arts of alchemy, pottery, and other combinations of ingredients and heat. While this comparison may or may not have application in preparation of meals, it does mean that the skilled chef, in pursuit of this technique, may be able to concoct recipes that, while not edible, serve other purposes, from poisons to explosives to other purposes. This must be done with great care and judgment, as the mission of cookery is the satisfaction of those who partake, but for those who choose to interrupt the normal flow of meals, there is justification for drastic retribution.

The Shot of Money: The ultimate goal for any chef is the delivery of food into the bowl or cup of the customer. This technique focuses on the movement of material from point A to point B, with a special focus on ballistics, torque, terminal velocity, estimation of distance, and circumvention of obstacles. From the flipping of a bowl of stir fry to the tossing of a soup across a room to land, without splashing, within a tureen, this technique is the most outwardly visible, yet often the most useful, of actions a chef might need to take … and has endless possibilities in the delivery of projectiles and other undesired items upon targets that would as soon not receive them.