Introduction: The Fellowship and the Naming of Names

Apologies if I didn’t quite get all the details (or get them all correctly). There are a few places where I got distracted (or was busy scribbling down details for my character).

Hero - fighting champion of the One Fang clan (the wanderers/nomads), from Tosk. Faramir, but everyone treats him like a shifty Boromir.

Why champion? Was volunteered to take care of this (undefined problems in the hinterlands), because we owe it to our dominions.

Tell us about your hero … An adventurer from his people, dedicated to gaining glory, recognition for the weak, for his people, and,course, for himself.

Basically talked his way onto the team. Why is he the champion? Because he convinced the Fellowship he was.

Three facts about the people …

Sword protect of the city of Nelres; when the Overlord rose to power, the city and empire fell and were slaughtered. The Protectors had sworn an oath to their gods, and the admixture with the power of the Overlord condemned them to remain on the Earth.

Champion because they’re the only one who remained in Nelres.

The city was protected by something that helped others ignore / not find them. Which is what the Overlord wanted (and took).

Not a squire! A wrangler. Horses, people.
Leathery skin – 25? 75?
Cantankerous. “Here is why you’re being an idiot”
From an area on the fringe of the Empire.

Council of Wizards. Interested in helping and interfering. Like the Doctor.
You folk drive me crazy, I’m going to hang out with the animals. Less wizard, more druid.
And when he came back, he found a lot of his people were signing up with [the Overlord].

Agendas and Move and Gear (Oh my)!

Gear: Moonshine, Something You Found Over There, (more) Orcish Moonshine, Riding Warg.
Tough as Nails (expend uses as armor), Scary as Hell (intimidate to Talk Sense), Cunning As Can Be (Look Closely without Rolling)

4th Agenda: Don’t Forget (dwell on pain of how things used to be)
Curse of Dust: Pain does nothing, and natural armor of 2 uses, prevent harm to others. When Feed on Pain, can recover armor.
Core: Unending Despair (no Hope or Despair)
Core: Feed on Pain (harm -> healing)
Core: Lost Ones: lore on curse, ruins, people, my death, where I’ve been before.
Inner Darkness: Can’t die or Taken Out … so lose all agendas and Darkness Reigns (and Overlord influence)
Bogey Man: When out of the light, can keep enemies busy
Unnatural Tenacity: pain needs nothing, so damage stat acts as though Hope.

4TH Agenda: They Need Me.
(Always stick with others, even when impossible)
No limit on number of Bonds.
Fast Friends: Speak Softly or spending time, get a bond. (Not companions)
Please Just Listen: Talk Sense.
Dangerous to Be Alone: watch someone’s back.
Power of Friendship: Bonds have tags of Precious and Useful.
Voice of Reason: I told you so! = Hope.

Note, Overlord is a “myth” (doesn’t exist, that’s back from the olden days, we have bigger powers, a distant problem that’s not our concern, Fake

Army: The Organization (a corrupted Fellowship of mini-bosses)
Spread corruption and blight.

Weakness: a blessing of some sort. Something common.

Was responsible for the fall of Wynn’s people.
Corrupted the Harbingers.

Bonds with the Overlord

… pick up next time

First off, thanks so much for getting this down, Dave.

Second, it probably won’t be Blanket of Ash, ultimately. I dunno what, yet, but probably not that. (That’s honestly a really good tag for a game doing Fellowship: Empire, so… some day?)

And we can always rename things.

Hmmmm. Saga about the rise of a terrible force that will eventually become an empire, masterminded by an unseen and unbelieved-in mythical threat that harkens back to ancient and evil times, opposed only by a band of brave heroes who are outclassed and doomed to corruption before they even know it’s coming?

If Myths and Legends wasn’t already taken, I would think that would be a good name: our Evil Overlord is considered a Myth and we have the Legends of the past are under her sway.

If we swap the words around and delve into some of Bill’s comments on there being Mists, we could get something like Mistland Legends which is… okay. Legends of the Mistland is also okay.

@Dave, an “important” question that I don’t think got asked last night: what breed of mundane cat does Carabas resemble and are there as many different types of catlings as there are breeds of cats?

Carabas is a general medium-hair mixed breed, in color a dilute tortie, cream-blue with a few white patches. He has lovely blue eyes. 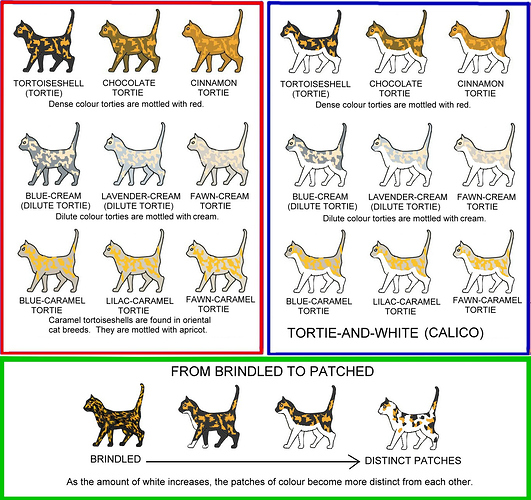 Catlings come in an array of cat colors and markings, as well as “breeds” that are analogous to human ethnicities and races, or even family lines. In the Shire there’s both a breadth of forms and a cross-breeding smoothing of the differences; smaller and more isolated populations elsewhere would probably be more pointedly homogeneous and distinct.

There is no particular race prejudice between catling breeds (there may be some slight tribalism between geographically different population groups as to who was most clever in their choice of dwellingplace). They tend to save the prejudice toward those unfortunates who aren’t catlings.

Finally got the session 0 recording up. Cleaned out a lot of my rambling and tightened it up by almost an hour. Downside is the image render resolution isn’t very good.

Awww … the rambling is our favorite part!

(Well, mine … it lets me catch up with my note taking.)