It was a simpler time [Background][Cutscene]

“So, Doctor Quill. Once again, we see that there is nothing you can do to stop my plans to --”

Alycia was in her Moroccan phase. Dr. Chin had been building a base in Northwest Africa for several months, as part of some attempt to shift the Sahara Desert north across the Mediterranean and destroy the economies of yadda-yadda-yadda –

Okay, it was a horrifying idea that would have possibly killed millions, and destroyed the world’s economy. I don’t want to be flip about that. But it was almost impossible to listen to Achilles Chin on a rant without rolling your eyes.

I was kind of reluctant to say that out loud, though, because Alycia – who’d been living at this desert base for that whole time, and was maybe going a little native – was pointing a vortex blaster at my belly button.

I looked at our fathers, standing off across the room, both in a high dudgeon. “He – might have met his match in my Dad.”

“You’re finished, Chin. Even now the authorities are closing in. Within the hour, this base, like your plans, will be a smouldering --”

She raised an eyebrow at me. I felt my stomach do a little flip-flop. “You might be right. But even in this, my father will win.”

“Nah. Dad’s right – that generator’s going to take another 45 minutes or so to max out those capacitors. The Moroccan’s have called in NATO. The strike force should arrive in --” I bit off my words.

Alycia smiled. “Thank you. That will come in handy.”

“It won’t help your dad’s scheme.”

She shrugged. Then her face grew serious. “Probably just as well.”

“Well, that sounds kind of ambiguous.”

“Hey!” she said, jerking the vortex blaster in a way that made me sit very still. “Breaking down the world order – especially an undemocratic pseudo-technocracy such as the EU – should be the goal of anyone with half a brain! Don’t you agree?”

“I know! But! Do we have to send mass starvation through Europe, destroy the very people we want to save, all to make some sort of point? If so, how does that make us better than the oligarchs and elitists who allow the same thing to happen in other parts of the world?”

“And all your dad can think about is how large an explosion that power tap shunt he thinks nobody spotted him putting in will cause. Ignoring what that will do to town around this hidden base.”

“Millions of lives are at stake, Alycia. I mean, it’s a shame that --”

“If you say it’s a shame that several hundred lives have to be sacrificed to save millions, I’ll --”

"I’m not the one who built an extinction-class weapon right next to the souk!"

We glared at each other a moment.

The building trembled with explosions from outside. NATO strike force – I could hear the Apaches circling about. Rubble tumbled from the ceiling.

“I better go help Dad,” we both said. She smirked. I blushed.

“I’ll – um – maybe knock out a wire on that power tap shunt as we’re getting out of here.”

She nodded. “Maybe I can talk Dad into – maybe shrinking the Sahara instead of moving it. More arable land for farming – that’ll show the American Big Food oligarchs, right?”

She lowered the vortex blaster. “Until we meet again, Jason Quill.”

“And peace be unto you, Alycia Chin,” I replied.

The good guys won that day.

It’s been said before, so I’ll just repeat: 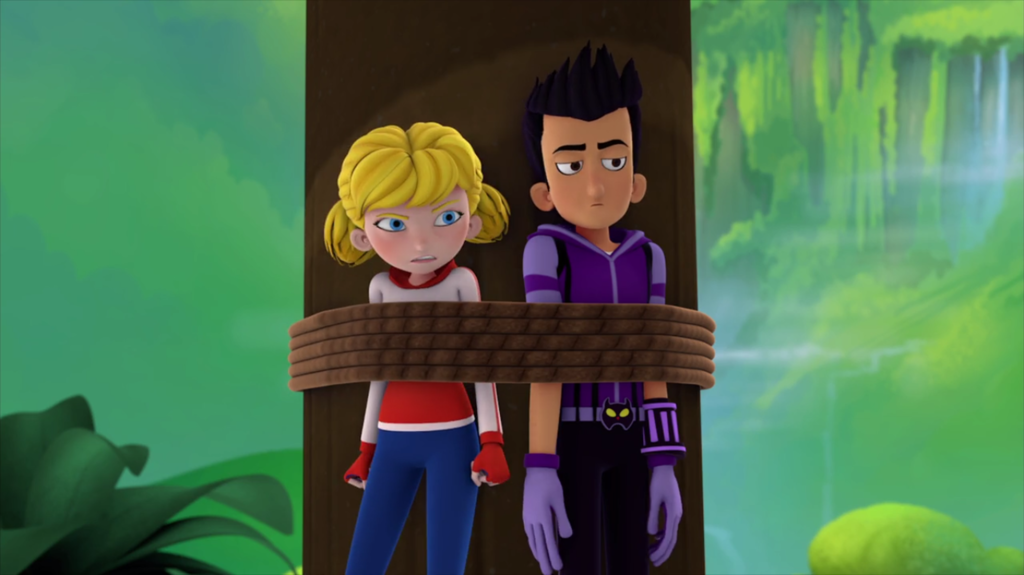 It’s been said before, so I’ll just repeat:

Jason moans. “Yeah, I wanted us to sue that cartoon, but Dad talked about the Streisand Effect, and then I don’t remember anything about the conversation after that.”

And now I read this and think of Aziraphale and Crowley. Only with more vortex blasters.