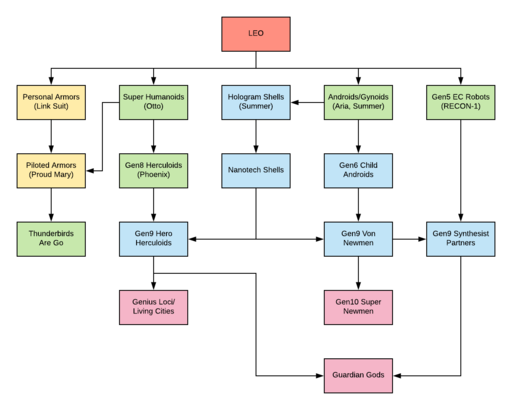 The “Super Humanoid” series begins with Otto. Otto, plus the Link Suit, gives you conventional mecha, or human-piloted giant robots, such as what he built for Mary. Beyond that, transformable modular piloted craft can be used for Thunderbirds-style rescue vehicles.

Going in another direction, Super Humanoids become self-replicating robots, starting with the Phoenix.

Aria works on developing minds for new robots. Her contribution to Phoenix was vital, but she also extends this to creating newborn human minds, combined from two or more donor minds, that can grow and learn just as any other child does. These are the Gen 6 Child Androids. An example would be Leo and Aria’s own children.

Summer’s fork from Pneuma saw her adopt a new holographic shell (with Leo’s begrudging acceptance). From there, she may innovate into other new shell tech, such as nanotechnology. This enables a self-healing (not just self-replicating) robot. This work also leads to the Gen 9 Von Newmen - androids who can heal just like a human being, and live and grow independently of complex machinery - and their cousins, the Gen 9 “Hero Herculoids”, who can regenerate battle damage as well as reproduce.

Meanwhile, Leo and Aria collaborate on an “EC” Robot, or “Ephemeral Cerberus”, a unit with its own mind (sentient or not) that can temporarily mind-meld with someone else. The EC robots act as partners, pets, guardians, or vehicles to sentient Newman robots. Leo can build an EC Robot partner for Summer, in the form of a predatory cat which can transform into a motorcycle and/or dock with her as exoskeletal armor. With nanotech shells, they too can self-heal, or more quickly heal a partner they’re docked with.

The final development of these technologies are the Genius Loci, or “living locations”, towns or villages or cities where the infrastructure is all robotic and controlled by empathic intelligence; the Gen 10 “Super Newmen”, with built-in superpowers and regeneration; and the “Guardian Gods”, or partner creatures who bring massive power or durability to their Newman partners.

None of this has any immediate significance, unless (for example) we get more visitors from another future. But I was inspired by the talk of the rotating Star Wars game - if this group ever jumped into a scifi game and wanted some world continuity, here’s one version of what the future might include.

Nothing comes of it immediately, and we’re not sure what all will happen, but what does the future hold that we could predict…?

That does raise the question of how/whether Leo’s status changes (or doesn’t) with this development. Just because he’s not heroing but is instead in the lab doing researchy stuff doesn’t mean he isn’t rated a threat by AEGIS any more. On the contrary, in fact, esp. as he starts producing further robotic creations.

That’s a conversation Alycia might want to have a follow-up with him about.

His situation is a little different from Alycia’s. He has’t been charged with anything - he’s treated more like (as Doyce put it) a ticking bomb, dangerous but not personally malicious. His backstory has him on probation, where he’s allowed to build robots and similar shenanigans as long as he keeps his nose clean. That period ends when he successfully graduates high school, at which point I would expect AEGIS to try and recruit him as an in-house scientist or farm him off to some reliable superteam (so much for THAT plan).

If there’s something more to say or ask, put that conversation on your list and we’ll get it done when you have time. He’d be open about this much, it won’t take effort to get details from him. We’re also still looking forward to a talk with Otto, which might be complicated by having Mary around.

Hmmm. Yeah, let me put that one my list. Even with that delta, taking the Scion approach to things would have her want to talk to him a bit about it – esp. since, one of her core concerns about the Newmans having been largely resolved (though she still has to process the new news) Leo is less of a perceived threat/menace than he formerly was, and so is safer to compare notes with.

That makes six writing projects in the queue. Good thing we have a few weeks.

While the idea of all this sounds cool on a lot of levels (I for one welcome the transhuman singularity), I can’t help but appreciate that Phoenix’s official designation is Gen8 Herculoid.

And does that “Thunderbirds are go” branch mean that Otto and Proud Mary are going to team up as Halcyon’s newest superhero couple? Maury’s going to want an interview.

While the idea of all this sounds cool on a lot of levels (I for one welcome the transhuman singularity), I can’t help but appreciate that Phoenix’s official designation is Gen8 Herculoid.

And does that “Thunderbirds are go” branch mean that Otto and Proud Mary are going to team up as Halcyon’s newest superhero couple? Maury’s going to want an interview.

Leo and Aria are the ones who said “we’re outta the superhero game”, Otto said no such thing.

If we were sticklers for compliance with the game, and assumed “paragon of the city” meant “active superhero”, that’d be the Otto-Phoenix-(someone else…?) combination.

And yeah, neither Leo nor I have any regrets about referencing great shows of yesteryear, especially if we can play with the concept in a way that works for the game.

I saw that. It made me smile, as call-outs to two “hero teams” that I dearly loved.