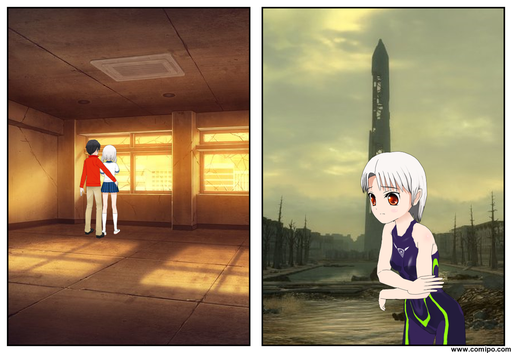 It’s not the temperature. I almost can’t tell. I don’t have good thermal sensors. I remember what that was like, I’ll be okay. Too bad Leo isn’t here to warm me up.

He’s keeping her warm, back home. Back in my home world.

I can’t ask Charlotte or Jason for help. She’s too… distant? He’s too engrossed in the answers he’s been after for so long. I have no right to butt in. Their needs are greater than mine. I need to support him, and her. If she needs it. Does Charlotte need anything?

No - I can’t tell Jason anything. He’ll instantly regret bringing me here. He’ll blame himself, even though it was my choice. It’ll undo the hard work I put into getting him to acknowledge me. I’ve got to tough this out.

But god, how am I going to leave this behind? I know, just step through a portal again, depart the way I arrived, that weird blankness, the voices, the whatever that was… But how am I going to leave these memories too? I’m haunted by this place. This sorrow, this misery, all the death here. All the questions, buried under a layer of ash, obliterated in those hemispherical excavations into the earth, the holes that used to be places and once held people.

Is there a Leo out there?

When did all this happen? 2008? Leon Delacruz was in California that year. Rossum took him. Is there a Rossum out there?

Agent Ted Waters was based in Halcyon City. If he hadn’t led the AEGIS team to bring Leo back, would he still be with his birth father? What would he have become by now? I almost hope that… ugh, but that’s such a horrible thought too.

I can’t think of it. I have to get out of here before I’m consumed by it.

Would Leo do this to someone, if they hurt Aria or I? Would he go this far? He always said he doesn’t build weapons. But I know his plans for the gen-four design. I know the darkness in his mind. What would it take to bring that out?

We’re not worth this. Nobody’s child, nobody’s lover, is worth millions of others.

I have to give something back, brighten lives here somehow, or I’ll be lost. All I have is words and memories. Will they be enough? They have so far, for Jason. But if not…

Keep smiling. Be nice. Bright. But also careful. Shine like the summer sun, but burn like it too, if anything threatens.

If necessary, the holo-emitters should be able to align their lasers on a point of focus. I can cut, or shine bright enough to blind. I don’t have a Casimir Fractal, so I’m on limited power. Hopefully I won’t need those things too often. Recharging options are in short supply here.

You can do this. You’ll get them home.

OMG you got her in the suit.

This is such a great piece. Thank you.

Summer sees this world’s despair in terms of Leo’s knowledge of neurology. The closest comparison would be drug abuse. With a long or intense enough drug habit, the brain degrades its ability to absorb neurotransmitters like serotonin and dopamine. You literally become unable to feel joy (and other things). Assuming there’s some validity to the theory that morality has roots in feelings of disgust, you might also find yourself doing things you’d never have accepted before if you no longer felt that. A general inability to process strong emotions or feel anything could indeed lead to worldwide ennui as described.

It’s not a simple comic-book explanation, but it could be researched and (in theory) reversed around the globe, so there’s that? Causes could be anything, but a global pandemic that affected brain chemistry would be one possibility. If she were staying - and she has no desire to do so at all, and that hurts too - she would probably try to examine the problem from that starting point. She and Leo are both a few semesters of medicine short of doing that research, much less cooking up a fix, but hopefully Byron is better equipped. She would definitely not settle for explanations like “magic wishing rock makes things more possible”, but it’s not her problem.

THANK YOU for this.

I felt frustrated not being able to involve Numina more in the events of Part 2, largely because of the “bluffity bluff bluff” initial stages, and then yron, and then Charlotte, and then flashbacks, and then …

He was thinking of her, but couldn’t engage with her without being overheard by people who shouldn’t hear what he had to say.

On the other hand, it’s fitting that she’s thinking so deeply of the pain here, as that’s her thing. Jason’s more engaged in the immediate in-his-face stuff, as is his wont, though I’d already been writing up some notes on his strategic considerations about the situation here (what does his dad need? how to get it to him? how about the rest of the world? how to rescue Iceland? but is it right to push the Vyortovians back here?)

But, yes, if he realized how impacted she’d be by all this, he’d be appalled and figuring out how to set up another portal to send her back.

Numina was properly kept in the background, this was your plot and a heavy payoff for a lot of work. Everything worked out. You can always have Jason talk to her later if you need to process something, and she will step up if there is conflict.

Numina was properly kept in the background, this was your plot and a heavy payoff for a lot of work. Everything worked out. You can always have Jason talk to her later if you need to process something, and she will step up if there is conflict.

Oh, it makes sense, but I did want to note the places where Jason really wanted to talk with her right then (and, honestly, the moments when there was nobody else in the world but him and what he was hearing). I’ll probably touch on that elsewhere. Jason (nor I) did not take Numina’s presence as just a set piece, which is why the above was a nice add.

But if Jason comes off as though this is a big deal for her but not him, she will point out “it’s not worrying that I am deeply troubled by this. It’s worrying how deeply you aren’t.” She will expect a good answer to that, and may feel some distance if he shows a casual face about what’s been going on.

Jason’s in problem-solving mode right now, not others-empathizing mode. So more distracted than casual/calm. But, yeah, that might provoke some hard questions from her.