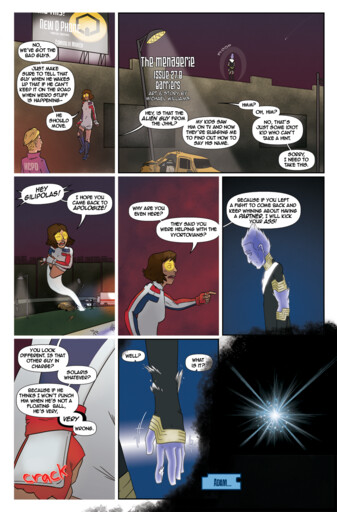 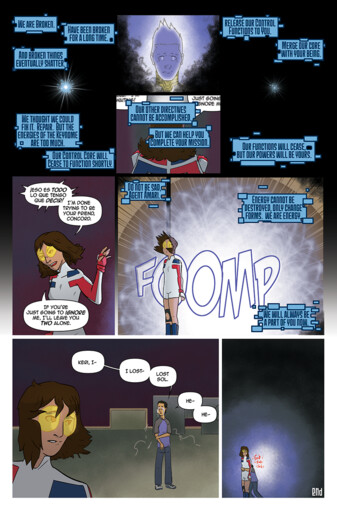 Oh my goodness, I managed to finish this with… just over 41 hours before the next game. Not bad considering I had this scripted and layout roughed out since Tuesday and basically spent ever free moment since Doyce said “yeah, that sounds like Keri” working on this. This is why I don’t do comics more often. I have wanted to make one of these since we’ve started playing but this seemed like the best time.

Also getting to design and draw Keri was fun (except when it wasn’t).

If it had to be any scene, I’m glad it was this one.

Wow. That is just – well, aside from being heart-rending, it’s beautiful. Well done, sir!

Thanks for all the kind words guys. Now that I haven’t been working for about 10 hours straight, I think I can share some commentary about the less obvious bits to the art.

So first of all, the title is also a story element. Last time Adam was around Superchica he got hurt (emotionally), so his barriers are up in full effect. We see this in the panels Concord are in, because they have a black panel border that the other panels lack. This is also the background color of Sol’s panels, meaning he’s all wrapped up in those thoughts. It’s not until panels 5 and 6 on page two where Adam opens up and (literally in the art) destroys that barrier between them by letting himself be vulnerable.

Also, up until that point Keri and Concord are on two different wavelengths: Keri’s panels have a reddish tint to them, Concord’s have blue. It’s not until panel 7 on page two that they start mixing: Keri has the blueish tint in the sky behind her while Adam has red but he’s still so wrapped up in his own pain that it makes it purple instead. And then when Adam fully lets himself open up and shows some vulnerability, they are both surrounded by Adam’s blue.

On that same thought, notice how all of Keri’s speech bubbles are covered up and blocked somehow (except in the two panel, where it is Adam who is instead slightly blocked out). Her words are reaching him, and you get this feeling like even though she’s trying to make this a conversation, Adam’s too wrapped up in his own pain to make this anything other than about him.

Other than that, there’s some fun stuff all around: there’s the Q phone billboard in panel one. There’s a literally falling star in panel two when Adam shows up (I felt like such a shit for including that). Keri’s outfit is literally the Dominican flag on her shoulders (there’s a “weight of the on her shoulders” joke in there somewhere). All of Adam’s sound effect share a similar sound (ploop, foomp).