Halcyon City has all kinds of cameras. Weather cameras, NCDOT traffic cameras, and a variety of open-access private webcams. Many are simply aimed at the downtown skyline, waiting to capture the sight of a hero and villain fighting, or a spaceship falling through the clouds to hover ominously. Maury Jones knows them all.

This week, those cameras caught a cloud of robots flying upward into the air, darting off in some direction, then returning several minutes later. They’d somehow started pursuing a mysterious fighter jet. That jet was later seen transforming into some kind of bird-like creature and tearing apart the robots in a furious display of power. Maury hasn’t made much progress there, but the list of likely builders is short. The Menagerie’s Link is at the top of her list. There’s a state map pinned to the wall, with permanent marker tracing a line through a series of pins. Those robots went somewhere, and Link was waiting for them. But that research will have to wait another time.

Right now, another spot on Maury’s cameras is more interesting. After the robots were inexplicably blown out of the sky, they had to go somewhere. Some were simply disintegrated. But many - mostly the victim of that big jet-bird - were flung outward across the city. Maury was able to trace their trajectory down to the roof of an abandoned building nearby. She checked records online. The property rights reverted to the city. The fewer parties who can charge her with trespassing, the better. She throws her urban spelunking gear into the duffel bag and catches a ride over. Once outside, her lightweight collapsible chair comes out, and she wheels her way inside.

The procedure is different for every building, but much of her prep is familiar. Miner’s helmet with flash-lamp, a combination of light source and head protection. Maury has bumped her head climbing quite a few times, and it always hurts even with protection. Most of the duffel bag won’t be needed, but some of it might be, so she clips one end of some Edelweiss Axis II climbing rope onto the bag’s handles. The other end goes onto her belt. The most essential pieces - a home owner’s toolkit, crowbar, and so on - go into the heavy canvas backpack, which she slings over her back. A plastic water bottle hangs from the backpack’s shoulder strap, always within reach. Her cell phone fits snugly into a pocket on the other strap, configured for voice. Thank goodness for Siri.

The most important part of the toolkit can’t be carried, but it doesn’t have to. Maury has three drones, affectionately nicknamed Huey, Dewey, and Louie. She can remote-operate them from an app on her phone, as well as a specialized remote control. She straps the remote unit to her left forearm, tests the fit (it would not help for this thing to fall…), and powers them up. There’s no need for these drones to make the awkward ascent she’ll need to perform, so she steers them one by one, out the front of the building, up ten stories, and onto the roof. Once there, they can sit - no need to have them constantly flying. But their cameras remain active, positioned on the fallen robots which are her objective.

Maury starts her ascent plan. She can’t use the elevator - it’s powered down, after all - but the elevator shaft is another thing, if it’s unobstructed. She places the crowbar against the doors and heaves, bracing herself as best she can, and putting her gym workout routine to a solid test. The doors finally give, revealing an open shaft climbing to a distant ceiling. Good. Maury flashes her light up and down the shaft, looking for markings to indicate floors. Three… five… seven… Ten. She can get to the top floor, if not necessarily the roof.

Sitting in the chair is as comfortable as Maury typically gets. She doesn’t like how this part feels, but travel is necessary. She doesn’t have a flying carpet, and even if she did, staying in shape is worth the pain. She slides out of her chair, carefully feeling for and grabbing hold of the rungs of the emergency ladder. Once sure she’s got it, she drags the duffel bag hand over hand close to the shaft. The line is long enough.

Hand over hand, she works her way up the ladder. It’s painful, and the weight of her equipment pulls her down at every moment. Her legs do nothing for her, but her arms are strong enough that it doesn’t matter. She’s got safety hooks, and she uses them at every floor. She has to stop and rest three times. She can hook her elbows around the ladder long enough to get her breath back.

The tenth floor presents a challenge. She can’t get leverage with the crowbar while still hanging safely onto the ladder. She spends half a minute considering it, forty-five seconds cursing fluently, and two more minutes enacting the plan she’s cursing. She can wedge the crowbar into the elevator door, and it’ll stay. Good. She pulls up enough length of the line connecting her to her duffel to loop around one end, detaches it from her waist - and sweats, oh god oh god if I fat-finger this, it’s gonna fall, and I’m gonna have to go down for it, god dammit don’t drop it - and runs it around a ladder rung. She makes a cradle for her ass, then carefully sits down in it - and the line, powered by her body weight, tugs the crowbar and hence the elevator doors. They open.

The crowbar, no longer wedged between the doors, starts to fall. Maury panics. She swings out, grabbing at the heavy bar of metal in the dark, light source bobbing and weaving everywhere in a dazzling and deceptive dappling effect. She feels her fingers close around it, but also feels the end of it scrape the skin on her forearm. Wincing, she reels it in, throws it angrily through the open elevator door, and follows.

She’s on the ground, panting, for a good minute. Her arm is really starting to hurt. She unslings the backpack and rummages through it for a handkerchief and duct tape. A good water rinse from her bottle cleans the cut - nobody cares about the carpets here - and she duct tapes the cloth tightly over the site of injury, to maintain pressure while her blood clots.

Still not to the roof. Fine. Day ain’t over yet.

Sure enough, there’s enough stuff nearby - railings and the like - to anchor her line. Hand over hand, one pull after another, Maury drags her duffel bag up ten floors. Chris Waddell scaled Kilimanjaro. I can get to the roof.

It’s time for a water break. Unfortunately, she used most of it tending to her stupid injury. Fortunately, the duffel bag has some Powerade Zero, plus Trail Mix, yogurt, and a hard-boiled egg. Thus refreshed, Maury surveys her situation. She knows where her drones are, one floor above on the roof. Through their eyes, she can see a roof access door. Through her mobile app, she knows their position relative to hers. It takes her only a few seconds to locate where to go. Her chair is downstairs, but she’s got a mechanic’s wheeled “creeper”, and she can scoot across the floor to the final door.

Finally! Sunlight kisses her face, and Maury drinks it in. She hauled her camera, laptop, and lighting equipment out of the duffel bag, then left it at the foot of the stairs. The door stays propped open with the crowbar - no sense in getting locked up here. But now it’s time to relax and luxuriate.

Sitting with her back to the cool brick, Maury uses her drones to survey the scene. The robots have remained motionless this entire time - good. Safety first. Nobody else has come looking for them. Also good.

@Applehack - Leslie - is online. Maury screen shares her drones. She doesn’t do the technical commentary. She runs the show, acts as Leslie’s hands on the scene, and generally presents as the “face” of the vlog. She’s dragged a robot “corpse” close. Her tools are ready.

Her face isn’t. She gets her compact out, uses some of her remaining water to wash away the sweat, applies some makeup. She doesn’t need to look girly, but strong lights on the human face do strange things. She does a quick final check-up. Leslie, on video chat, gives a thumbs up.

The lights are on. The cameras are rolling. The Twitch stream has started.

“Hi folks, it’s My Little Power Ranger, doing an on-the-spot investigation into one of the robots that recently attacked our city. Today I’m in the field, with our tech correspondent Applehack on the line, and we’ll try to figure out what we can about one of these metal guys…”

I had given her an urban spelunking interest in social media, but your mood board gave her a chair. I didn’t see any reason why both couldn’t be true, but also wanted to eventually show how. This was the result.

And her doing it in the chair reminds me of my all-time favorite Barbara Gordon picture, so there’s that. 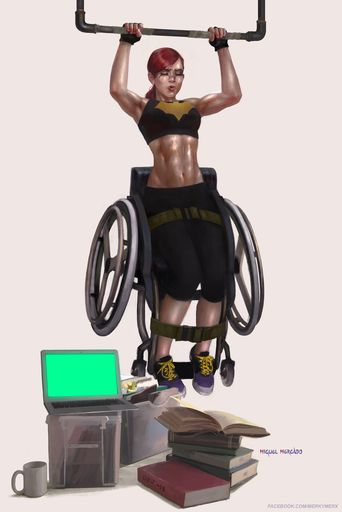