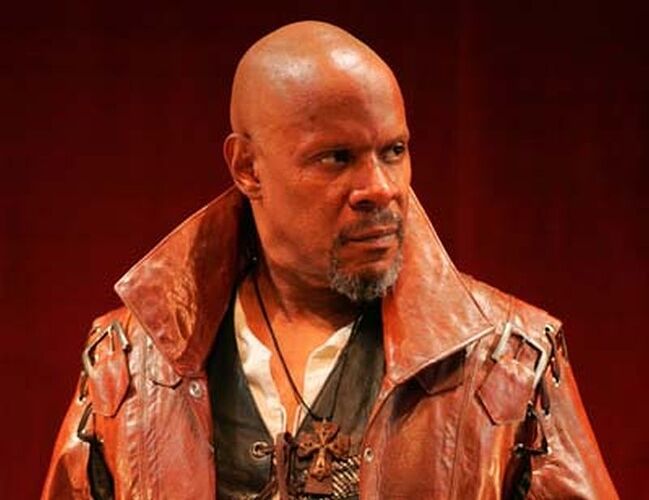 The hall is dark at the outermost edges. The ring of light at the center is cast by a chandelier adorned with jewels from around the globe. At the center of the ring is a dais. Upon the dais is what can only be called a throne, made of what might be a stunted tree forced to grow through the cruel confines of a brass cage. And upon the throne is the Dread Moor, whose name is not spoken.

He is dressed plainly, in contrast the opulence of his villa. His bald head reflects the light from above, giving him the impression of wearing a crown of light. His bearing, rather than his clothing, give him the air of a king at ease.

The squire is from Thailand. His sword is not out, but he clearly wishes it were. He stands on the long and beautifully woven rug that leads from the entrance to the dais.

Silence awaits the pleasure of the Moor as the two men take the measure of each other. The Moor is the first to speak. “I am the executioner of the unworthy. I am the betrayer of kings. I am the end of all wisdom. Speak my name.”

The squire has been cautioned against this, but not why. “You are the Dread Moor,” he ventures finally. His English is excellent - schooled in Europe, according to the Moor’s sources.

The squire seems more at ease. “During a raid, I was … separated from my companions. I encountered a goetic demon. It… it spoke to me, of things far-off, of great darkness, of-- Of things I do not wish to repeat.”

Velasco holds up his hand, and rolls it forward in an inviting gesture.

“You are… The knights call you enemy, but one spoke to me of your wisdom,” the squire continues. “Can you-- I mean, is there–”

“Is there any truth to it? Oh yes. Goetic demons never lie.” Velasco rises from his throne and stalks forward. The squire instinctively takes a step back, off to the side. Velasco can see his training - he’s not merely nervous, he’s tactically positioning. A shame. “I shall tell you three truths about them.”

He holds up a gloved hand, then tugs the leather off and flexes his fingers. On his palm is the Seal of Solomon, tattooed in silver ink. “The first is that their vessels need not be ordinary jars and the like. One may bind a demon to oneself.” He uses the bare hand to draw up his coat sleeve, revealing a dozen more such seals on his forearm. “Or many.”

The squire flinches away fearfully. Velasco allows only a hint of a smile to show through. “The second is that demons know all things, and will reveal it according to their natures. One whispers to me whenever my name is spoken, for example. This is its nature, to amuse itself thus. Other than this, they care not. The most beautiful poem is no different to them than the chemical formula for the most deadly nerve gas.”

He finishes his walk to the squire, who is doing his best not to call his sword. “The third is that no demon wishes to contract with you for your soul, or corrupt you, or any such nonsense. You will do this to yourself. For example, did they tell you that the Milky Way galaxy is merely a stain on the invisible teeth of the Dark Matter Dragon, as it coils itself about the Virgo Supercluster and begins to feast?”

The squire shivers. He has clearly been told dark things, and this one is simply another horror. “Please,” he finally whispers. “How do I… forget these things? Is there any escape?”

“You have come to the right place,” Velasco says, voice warm with sympathy. “Soon, your doubt and fear would weaken you. Excalibur would abandon you. And I promise you, my friend, there is no greater loss.”

In a flash, a black blade - not mere forged steel, but a tear in space-time itself - flickers into Velasco’s grasp. The squire can only manage a shocked “oh” as the phantasmal weapon penetrates his vital organs. The strike was a mercy. It will take seconds, rather than pain-wrecked hours of sepsis or some similar fate. Velasco takes the slain squire into his arms and eases him down onto the rug, facing upward.

The Moor attends carefully to the eyes, as he always does. There’s something about the receding of life that fascinates him. He has created several studies with paint and watercolor, trying to capture that moment where confused desperation gives way to lifeless and unseeing peace.

The moment comes and goes. Servants emerge from hidden doors and shuffle silently forward. As Velasco walks away, they roll the body up in the rug, and carry it off for disposal. Other servants arrive with a replacement rug. After all, why clean? A replacement will be a novelty for a time, and rugs are lowly, easy to replace, and meant to be walked on.

The Moor enters his study. The room is lit with natural sunlight from above, which reflects in myriad ways from crystal decorations, carefully sculpted streams of water, and recessed mirrors. Tea is waiting, as always. Several manuscripts await his attention, but the muse does not speak to him now. While the goetic demons at his command know much, translating their wisdom into poetry and instruction is one of the his many hobbies. He publishes under many names, now more for his own pleasure than any further need for wealth.

Many canvases hang on the study wall. Others, partially finished or discarded, lean against the walls or in corners. Only one currently occupies an easel. Its subject lies at the far end of the study.

The cocoon radiates its own … well, perhaps “light” is the wrong word. It is a sort of radiant darkness, shot through with flashing stars. Inside it is a humanoid figure, curled up into a fetal position. Velasco has studied the subject scientifically. The being, called “Sablestar” by the American news media, seems to be in a state of suspended animation. It - or she - appears to be absorbing energy from nearby surroundings, and weaving that energy into its own body. But beyond that, the extraterrestrial nature of the being makes further investigation difficult without meddling with the process. And the goetic demons in his service can - or will - say little. Curiouser and curiouser.

Left without scientific alternatives, Velasco has opted for an artistic study. He has executed several preliminary sketches, capturing the basics of the cocoon and its occupant. It is beautiful, but he cannot explain just why. He seeks answers now in paint and on canvas, and his current work is coming along well. It lacks the vital core of art that would make the painting truly worthwhile, but as a realistic depiction, it is passable.

He studies the cocoon, and his painting, seeking as always a new approach. It is then that he sees it. Until now, the figure has exhibited no motion, no sign of life whatsoever. But he can see the eyes of the figure, and the eyes of the painting, and spots a difference. Subtle, but…

So you are awake. You opened your eyes, suspected danger or felt unready to challenge whoever you might find, and now pretend to sleep again. Cunning.

Velasco remembers seeing the video of the fight in that American city. The intruder wielded some sort of bladed weapon, reminiscent of his own.

It shall be very interesting to speak with you, once you drop this facade.

If Sablestar is otherwise spoken for, feel free to discard the latter part. Velasco isn’t an anarchist or revolutionary - he thinks he serves a useful role to the Grail Knights, despite being considered their enemy. But aside from that, he’s got quite a bit in common with Sablestar.

I didn’t have her waking up here and talking about this, but one thing she might find VERY interesting is the portals to the Sepiaverse - imagine being able to literally draw out despair and extinguish hope from some other reality. This might be the basis for the much-discussed “Akumatizing” process.

Bill, I have a great many feelings about this and they are all of wonder, and love, and happiness. It’s really like you just wrote a short story about things I love (knights, heroes with self doubt, mystism, temptation by the Dark Side, the occult, cosmic horror, Avery Brooks…)

Honestly, the only mistake was on my part and it was reading this before heading to bed because now I don’t want to go to sleep and instead want to ponder on all the possibilities this.

Having him casually ace one of the Grail Knights is the only thing I have serious doubts about. I consider death “off the table” on-camera, as was discussed tonight, but what about for NPCs in cut scenes? The act serves to tell us something about the Knights’ mythology as well, which is the only reason I considered it worth including. But there’s ways to show that, and what kind of man Velasco is, without that, and I can edit it if people feel this is too dark in tone. Let me know.

I don’t think so. Death is off the table on-camera for the most part both for tone and by convention. But we know it exists off-camera, sometimes as a necessary element. I consider a vignette like this to be “off-camera” for purposes of our characters and the core story. The Menagerie are not going to face the Dread Moor with a sea of dead Grail Knights about him. This specific example speaks volumes about the character. I think it’s fine.

(I think the whole story is marvelous, in fact.)

Velasco probably shouldn’t appear on camera unless Armiger is involved, or if Concord or Ghost Girl get more involved in the knights and their mythos. His capsule character summary: what if Mordred and Lancelot were the same character?