In theory, ditching the field trip AND school with a fake illness is both awesome and hilarious.

In practice, it’s kind of boring having nothing going on when everyone else is in school. Your mind starts to wander while you check news feeds, twitter, super-instas, and all the little threads of information that let you make a mental picture of Halcyon.

Someone’s going to attack the museum. Iconoclast? Architects of Evil? Ilijah Intrepid? Maybe all of 'em? Not good.

No one’s answering messages, texts are failing to deliver. Not good. Time to move.

Do you make it in the nick of time, or seconds too late? Roll +Freak. 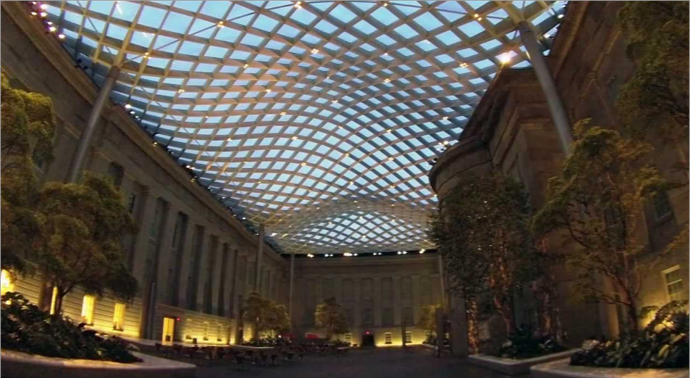 Statue of Flying Freedom posed in the middle. 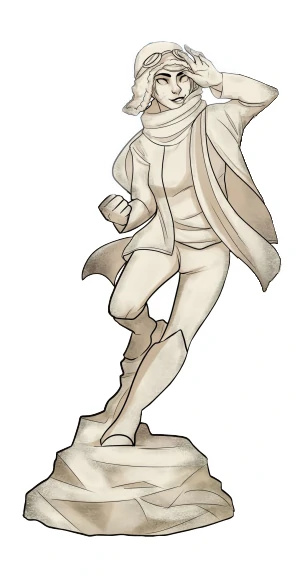 Sync - the Architects of Evil are planning on bringing down that rooftop!

Kiln, Alex are nearby the entrance to the super-hero wing.
Sync pushes his way past the queue and turnstile. Timer starts!

Hey, Alex. Roddy shows up, in costume, trying to get attention in the line, “Guys, give me a hand here, they won’t let me in, there’s going to be bad guys!”
Alex pulls the fire alarm.

Mette - bells, then crash of concrete and glass.

Mike:“Oh Joe! You’re here too? There’s bad guys, you want to give us a hand?”
[Said like five minutes into the fight.]

Kiln: Roddy: Hey I need a hand
Alex: I can give you one but I need to hold onto the other

Joe is headed toward Mette.

Joe -> 4!
Potential.
Heads toward Mette, jinking and dodging falling stuff. Yeah, if he can push people out of harm’s way along the way, great, but he’s out to try to defend her.

Mette: Fire alarms have not changed. And fire is the worst thing EVER on a ship.
Disorienting moment as all her training gets in the way. So she doesn’t notice the roof cominng down … [Give ground, opposition gets opportunity]

And … pouring through the roof, the Architects of Evil

The biggest file of rocks that land, Flying Buttress: “This is the first step in the grand revisioning, sweeping away the yadda yadda yadda …”

Blaster of Paris does the plasma burst at … Mette.

Joe - grabs her, shields her. Exposed to danger. Plasma blast, smoking gorilla hair.
Defend -> 7! - add team to the pool
Expose to Danger - Powerful Blow. -> 8
Lash out out verbally at Roddy to take a foolhardy action.

Roddy was saving Aliud, pushing them out of the way of debris. “My core is made of titanium, that wouldn’t have done anything. An interesting rubric for prioritization.”

“Sync, you almost let her get hurt! DO SOMETHING!”
Provoke -> 7!
Punish if they don’t do something …

Alex - Before We Get Started -> 13 !!!
Hold 3
Hack into the museum security system, emergency systems, fire suppression system, cameras … because they do that when they walk into places.

Roddy - heads off to punch the biggest threat, with a push from Aliud.

Flying Buttress, with Plaster of Paris, in the middle.

Roddy - flying through the air (thanks to Aliud) toward Flying Buttress.
Unleash Powers. -> 4! Clothesline …
Joe lobs a block of concrete (part of his pool) at Flying Butthead.
Kiln throws a spear to change Roddy’s trajectory to avoid the clothesline.
Roddy spends Team selfishly.
… Freak +1, Mundane -1, “Almost didn’t make it there, good job, me!”
Swing around his neck, headlock.
Opening to Directly Engage for a few moments.

Punching, not working, finger to the eye.

Mette - a furry wall has fallen around her. Much cursing, concrete, Joe is yelling … speechfying …
21st Century Studies - Assessing the Sitch, who’s most dangerous, who needs containment first. -> 5! [Potential!]
What does the future know about this moment?
Nobody knows why, but … this is through a series of events in the fight, the moment that puts Aliud on the path toward the Monster. [Goes with SURGE as the Martyr and no robots in the future] … Eyes widen …
Take a Powerful Blow (emotional) -> 11!

Alex - want to see what Kiln does.

Kiln - heading toward Ruble Rouser. “Cease your rabble rousing!” Attacking the knee.
Directly Engage -> 12!
Take something: stability! verticalness!
Avoid blows.
Flings back in gesture, and wall behind spiderwebs and falling down, even on her …

Alex - Madhesive, try to get him to glue one of his team mates.
“Ignore the useless glue guy … take down everyone else!”
They get angry, pissed off, and ignoring them as leader.
Superior -> 5!
“Useless? USELESS?” An amazing amount of glue, all at once.
And Kiln, Joe, Roddy note that Alex cannot breathe from all the glue. [they can spend to get out of that] [other students?]
Retcon: In fact the river of glue envelopes Nono and Emma.
Sync -> 9!
Sync - Spend Team to affect Rubble Rouser, too.

Aliud is stepping forward, prepping to enter the fray.
Mette - Unleash Powers, pinning to the wall, taking them out.

“Blaster, take these kids out, we have work to do!”
Who was watching Joe, looking the big guy, blasting at Sync, dodging, deking. …
Roddy, trying to redirect Blaster’s attacks …
Joe attacks Blaster with full teeth and momentum.
Joe -> 10!
Take blow, create opp, frighten the shit out of this guy.
Condition - Angry
Slam him to the ground, wait for him to come up, and he’s babbling in terror in French.

Alex comes bounding in, Flying Buttress, “Are you mad --” and then Blaster of Paris hits them.

Kiln - Emma, Nono are covered in glue and kind of struggling. But Rubble Rouser was trying to tear down the wall. Blaster is very afraid of gorillas. Mette looking their way.
Attacks the crumbling wall to accelerate it and blast it away into less deadly chunks.
Defend -> 8!
Keep them safe, injure self.

Mette - Aliud looks puzzled. “Please do not do this, there is no need to hit or restrain me.” See both that reaction, and the glued people to one side, Matt Hesive on the wall “Stop ignoring me!”, but Kiln is completely a target for Matt Hesive!

Mette - Further from the team, out of connection with the current team. Remove influence from Sync.

Will begin with Harbinger roll and with her action.