Once everyone was moving the right direction, she was swarmed by butterflies who hovered her along at a brisk pace. Roddy – probably 3-4 miles inland, and a lot of up. No trail.
Joe trailblazes.
Tahi - “Try not to make it TOO easy for us to be followed.”

Alex - Hey, you shot at us!
Tahi - I didn’t shoot at you. I stopped things from pulling trees on your. I stopped Joseph from making anything worse.
Alex - You could have just announced yourself peacefully. [And you are?] I am Alex Shelby.
Roddy - I’m Sync. I do stuff.
Tahi - It appears that Joseph is without his facilities. I assume, at the time, he was acting with foreknowledge but with malice.
Roddy - Nah. No malice, just stupid.
Joey - Hey.
Roddy - My grandmother once came to me and said I want to pass on wisdom: All Americans are stupid. [We’re Americans.] That’s right.

Glances at Mette. Does NOT look at Kiln.

Eventually reach a point, and then into a slightly lower area. Caldera? Plenty of (dormant) volcanic formations in Costa Rica. Strangler figs much in present. Forest, rocks. Nothing that can be farmed on, even coffee. On one ridge, the rock formations are visible as ruins. From above, looks like rock outcroppings under strangler figs. 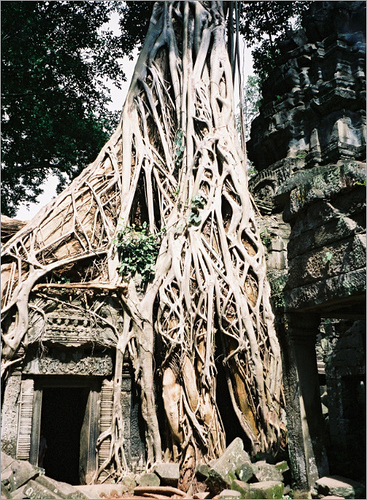 Taken off into some ruins, twists, turns, crumbled dead end … Joe kind of squishing in sideways. Hand on the wall, and lines light up very subtly on the wall. A section of wall pulls out of the way, grinding.

Lights come up. Flight of stairs. [Think of the treasure room from The Mummy, but with no treasure.] 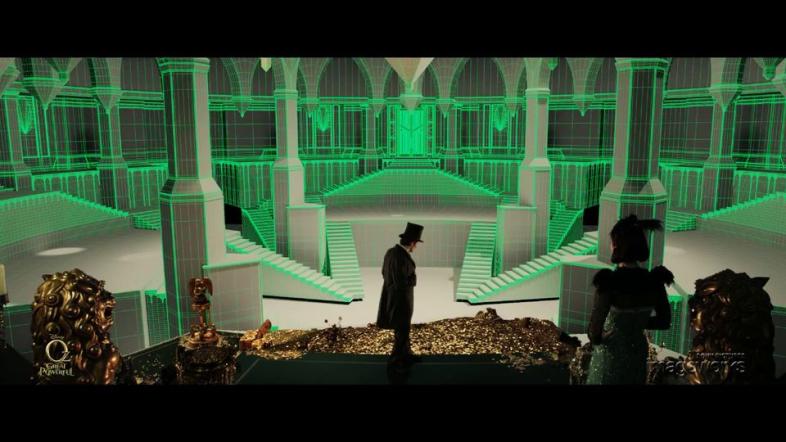 “Alex. Joseph. Sync. May I have a name by which to address you, Ancient?”
K - Kiln. (She nods, stiffly.)
T - To Mette. “I sense here a kindred spirit, attempting to keep Joseph from doing himself and other life forms harm.”
“Mette”
“… Times have changed. Why are you here? Not to save lives again?”

J - What. Happened. To. Me?
T - You were … what don’t you know?
J - Everything from being nearly dead to being … LIKE THIS.
T - You were healed from some massive injury. Apparently … (Weird akimbo ritualistic stance. [Alex thinks the pose looks familiar.]) You were recovered from a stasis, approximately 10 years, then out of stasis …
J - Wuh?
T - Files on you are [pose] just before brought out of stasis, your name was applied as Joseph Moore. That identity was … appended? What happened?
J - that’s what I’m trying to find out.
T - Your society has been accessing the temple for many, many years.
J - Wait, what, wait …
Alex pulls up photo of Joey from before.
T – yeah, I know, oh, (body language changes. looks back and forth) … You weren’t born like this. You were a human, like … (points at each … Alex, Mette, Roddy) like HIM?
J - … Yes …
T - You were that, and now you … holy mother, what did they do?
A - Movie called The Fly […explains…] and I think that’s what happened.

T - Abominable, but no.
A - Any great apes/primates servicing your temples?
T - Well, an entire society …
R - We have an entire city of giant apes? (glee!)
T - More a society.
K - Tahi … you said Joey was put into a stasis.
T - The entity now given that name was put into stasis a decade ago. It was old and they were regenerating it. But … the spirit had already fled. […] Are there more like you? […] The ancients tutored these people when they were growing. They remained after the Ancients were gone, no Guardian to protect it, so they came to know the place.
J - There’s a city of people like THIS? 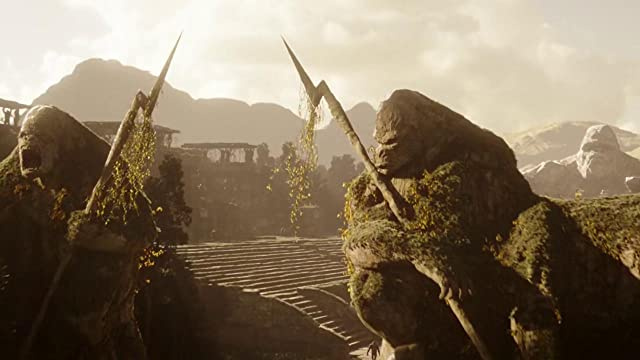 T - You keep saying city, I keep saying society.
[…]
T - You said you’d been shot? [checks with Kiln]
K - I am from my time. This is not my time.
T - Are there more of you, still?
K - Only one I called a comrade. [like you?] From my time, the long way. Not my people.
T - Ancients are no more, then. (Seems intent) I wouldn’t like to guess, but if you were badly injured, and there were no other survivors of your people, they might have tried to save you the only way they could. Although they why they would have kept you, explaining …

A - Can this be reversed and be made human again?
T - What was done was never done. Theoretically possible, but stunningly skilled or mind-numbingly ignorant … I’d have to know what was done.
J - They cut out my brain and put me inside … T - No, no … more like copying a book into an utterly blank book … 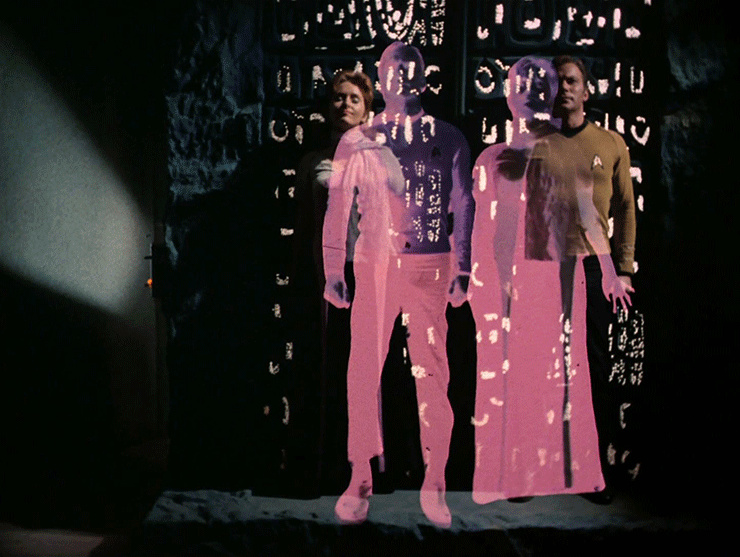 M - Mette says: “This runs very close to the evil use of a related tech in my time”
T - You came the long way?
M - My travel was instantaneous.
T - But you’re human, the humans were not –
M - But I am from the future, not the past.

T - You are what you are because you were pulled from a dying body into one that was healthy and unoccupied, and they wanted you to live for some reason. Can’t say why. Don’t know, only record of their access of the temple, which they haven’t since that time. If that’s what you want to know, that is all I can tell you.
J - Okay, you guys ask your questions, I’ll be standing over THERE. [Goes over THERE, back turned, shoulders tense]

K - Was mine the same kind of stasis as Joey’s?
J - Joey’s BODY’s stasis.
T - Yes, comparable.
K - Remember waking up in a future time … no notes about how long it had been, &c.
T - So is lack of knowledge of your past a recurring theme of you?
(Joey raises a hand)
(Kiln knows how they got in their situation … there’s just a time passage issue they don’t love.)
T - No record of any being being sustained for so long. The nature of the stasis chambers would imply if they kept working, they would keep working .

Joe: Take a Powerful Blow. --> 8! [Give Ground, Opposition Opportunity]
Roddy asks his stupid question: What was Joe’s new body’s name before it was amended to Joe?
T - What possible – you – you heard me say, that their spirit was gone, the body had been preserved, you’re speaking of the dead, by all accounts one of their great people … what are you doing, that your comrade is undergoing this revelation and you crack jokes like a jester at temple? Have you some purpose? Be aware of this group, this band you are a part of. Have a care! It is beneath me to say more, but if a child has a sharp knife …

[Shift labels attempt: Mundane +, Superior - … Roddy declines, so roll … 12! Shifting labels, clearing Guilty. “Look here, stone lady. I do a lot for this team. I pull the short straw when nobody else wants to.”]

Everyone stares, then Alex looks at Joe … and Joe is GONE.
Alex leaves a drone, and goes out looking for Joey.

Roddy – what would Powertronic do? We don’t know anything about this society you’;re talking about, but we need all the info we can get.
T - Are you pursuing this?
R - Yes. It’s important to Joe. But if you’re not gonna help us, we’re gonna leave.
Provoke -> 8!
She gives him the silent treatment, turns to Kiln, and , “What information would you have of me, Ancient, I will give you all I can.”

Mette - Notices Joe and Alex gone. Turns to drone. Alex, where’s Joe?
A - Looking for him right now. Haven’t found him yet.
M - With all these drones? You’re slipping.
A - Of course, I might be lying to you and maintaining his privacy. Gesturing with Chopper-like arms.

Walking through forest, and there’s a PoV of what’s stalking him. And just when it’s about to strike …

… and a drone drops down in front of Joe.

A bionic arm thumps into his chest. “Can I give you a hand?” 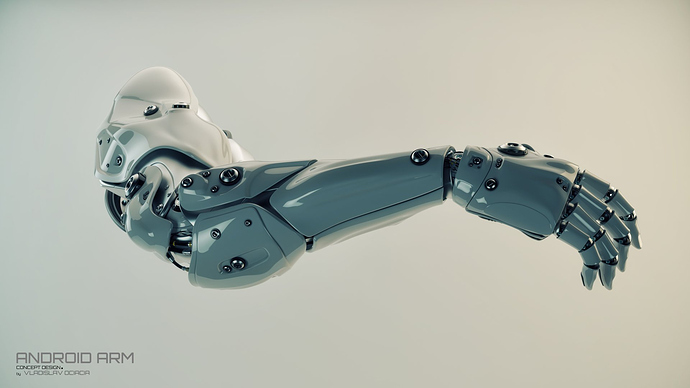 So, for what it’s worth, deep in the bowels of Windows on Margie’s computer, I came across a setting about allowing application to use the microphone, which was turned off. I turned it on.

That seems to have solved the problem, with one Discord experiment between us a success.

How it came to get that way … well, I blame cities societies of meddling gorilla people.

Now, with luck, it will continue to work for another two weeks.

@Dave if a conversation on forums makes sense, kick it off when ready. If we’re waiting for next week, I’ll be there. 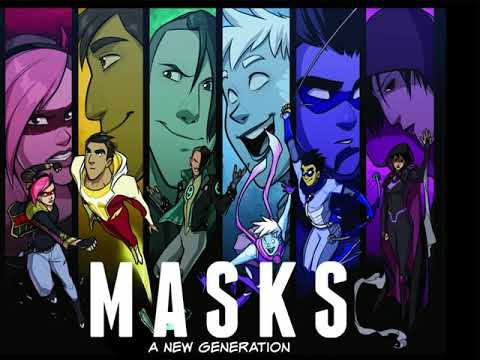