Leo sits uncomfortably between a projection of Pneuma, and a physically embodied Pneuma. The three are supposed to be talking about their options. In practice, one Pneuma talks to Leo, then the other talks to Leo, then Leo talks to them both. What worries Leo is that they aren’t talking to each other.

It’s not hostility - far from it. It’s what he predicted, and why he’s never done a straight-up mental clone of himself. Well, except that one time.

It’s an unwillingness to look in a mirror, and see a reflection that talks back. Pneuma, Otto, and himself have watched a few horror movies, and Leo remembers the ones where something from the spirit world is haunting the heroes, and shows up in mirrors and the like. To lighten his mood, he remembers the Marx Brothers movie where they did a mirror gag. Two brothers dressed like the third, then pretended like an open doorway was a mirror to fool him. Even this thought turns dark. It wasn’t really a reflection. It was different people in disguise.

The discussion has been largely honest and trusting. Both Pneumas know the other, even better than Leo knows her. Though they aren’t addressing each other directly, Leo can catch one nodding along when the other says something that sounds confusing to him. We have our own language, he thinks. These two have another one.

The issue is the merge. Gynoid Pneuma wants her old self preserved somehow, before the feeling of being used as a toy or tool by both Rosa Rook and Leo’s own father. Holographic Pneuma doesn’t fully understand, but that’s the point. With luck, she will never fully understand that feeling. Nor are they fully decided yet. The hologram feels a bit of resentment at being treated like a child who needs to be shielded from life’s harsh realities, and wonders if the gynoid will take further steps to keep her “pure”. The gynoid knows she’s being protective of her cognate, maybe too much, and that what she wants can be seen as selfish.

Everything Leo says is calculated to be positive and non-committal. What if they don’t go through with it? “Then I have three best friends, instead of two.” Will it be hard on him to take care of them both? “I like being around you.” Is it possible to build the hologram a replacement shell? “I’d already started planning a new gynoid shell, and you can put it to whatever use you want.”

He’s grateful they don’t ask the most embarrassing and difficult question he could possibly answer. “If the girl you love becomes two girls, what happens to your feelings?”

Fear speaks. They want to be friends, but nothing else. They want to use the split to finally make it clear nothing’s going to happen.

Regret follows. If they stay separated, there’s no way you can love them both equally, so you have to give them both up.

Shame and other feelings chime in. You’re a horrible person for even thinking you could have them both.

Frustration bubbles up from its prison in his heart. Tell them they have to do the merge. That’s the only way she’ll love you again.

Resignation. She doesn’t owe you anything, no matter what you feel or how strongly. You know that.

Anger, at Rossum, at Rosa Rook, at the world, and worst of all, even at Pneuma, gets its say too. They’re burdening you with this shit. You deserve better. You deserve happiness, and they’re taking it away from you.

The quietest, oldest voice speaks. The dark Leo Snow, the one who would have been his proud father’s son. Forget these two. Build one that can’t say no.

Leo abruptly rises from his seat in the conversation pit, startling both Pneumas. He smiles, apologetically, and catches himself. “Sorry,” he lies. “Leg cramp. Just need to walk it off…”

The two look worriedly at each other, then back to him. They know I’m lying. But I can’t tell them the truth. I have to go on, atoning for my stupidity and selfishness. I have to make their lives as good as I can, whatever the cost.

Time to tell them a truth. Maybe not this particular one, but a truth.

“You’re my best friend, Pneuma. Whether there’s one or two of you, I’m happy either way. You’ve brought my life so much happiness, I want to pay it back however I can. We’ll do whatever you both want, no questions asked. I trust you.”

They both smile, at him, and then at each other.

Joy joins the chorus in his head. Nothing else matters. That smile is enough.

This is the prettiest minefield I’ve ever seen.

Hopefully Leo’s behaving admirably and correctly through all this, however rough it might be on the kid.

There’s checklists of what makes someone a “soulmate”: mutual unspoken understanding, mutual comfort, constant challenge. He’s got that, because of her mental heritage and construction, and that fact messes with both of them. Ultimately he’s got something good with her, however many hers there are, and that matters more than a romantic relationship.

But yeah, he might be looking at emotionally easier alternatives pretty soon… 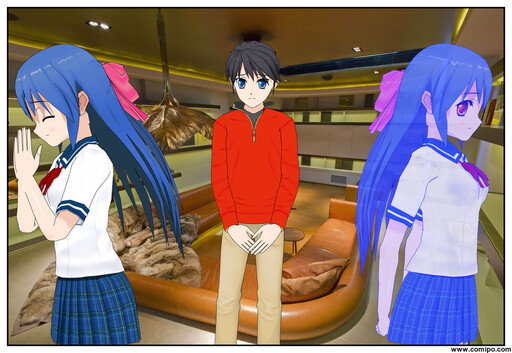