(assuming that nothing else pre-empted this…)

Otto is loitering in the Gale estate’s guest garage. He hears a click; the door to the bathroom opens.

Pneuma comes out, making an icky face. “The syrup on those pancakes is really something. I think something got gummed up.” She hefts the bottle, held in one hand, and reads it. “Drano Hair Dissolve. Ugh, I was gargling with the heavy duty stuff. This tastes so nasty.”

“Need a breath mint?” Otto chuckles. Pneuma glares at him, then gets a worried look on her face. “What time is he - are they getting back?”

Otto laughs, but doesn’t bait any further. “Wonder if speedster hair grows faster. Maybe that’s why they have that stuff.”

“Sounds logical.” Pneuma returns the bottle to the bathroom, then climbs onto Otto’s hood and reclines. The car revs - Otto doesn’t have a conventional gas engine, but coolant from his other systems runs through the hood, providing a comfortable warmth. The girl nestles into it. Moments of silence pass.

“What are we gonna do if the League, or Sergeant Amari, or somebody, comes back and tries to break up the team? And on that note, what if Leo and Charlotte succeeded? I don’t think Jason has really figured out what’ll happen if his father really comes back.”

“Hey, those guys can’t just tell us to disband. They got no right.”

“Might sometimes makes right in this business,” Pneuma reflects sadly. “Remember when we were researching team names awhile back? We found those small packs of teen heroes, basically organized like gangs. Wear colors and the cops come after you. Wear masks and catch criminals, and people will forgive a little vandalism or arson. Why would the larger, older, bigger groups be any different? Dr. Quill did his own thing, no matter what AEGIS, America, or anyone else told him. His CIA man wasn’t his handler, he was a bodyguard.”

“Hey hey. None of those pensive sighs of yours. Your Drano breath will get sucked into my intake.”

Pneuma laughs at that, and rubs her hand affectionately over the hood. “Dork. You smell too much like oil for anyone to notice.”

“Yeah, but it’s high-grade. I got some pride.” Otto ‘roars’ briefly, driving the RPM of his wheels’ motors. “Listen. They’re just havin’ dinner. HHL doesn’t know us, wants to know us, it’s stupid adult stuff and they’re gonna muscle us like everyone else muscles us, tryin’ to get the respect they’re owed. Jason will talk smooth, Charlotte will talk sense, the boss will have the sense to keep quiet. Adam and Harry are good people, they’ll do the right thing.”

“I guess.” Pneuma rolls onto her side, cheek pressed against the warm hood. The experience is something like hugging the world’s largest mastiff. “Otto, am I a bad person?”

“Where the heck did that come from?”

“You stop this right now.” Otto’s voice grows stern, though anything but cold. “You aren’t making things hard on anyone. Things were made hard, on you, on the boss, on Numina. On everyone around us. Everyone you and I care about. You were forced into carrying the load, but it ain’t your baggage.”

“But I… I don’t know. Everything I do hurts him somehow.”

Otto rumbles for a moment. “Y’know how Leo writes that emo poetry he thinks we don’t know about?”

“Hahah, well… I got a glance of one of his composition books earlier. He’s not done with this one, but get a load of this. ‘When a Rook attacks the Queen, Knight must move to intervene’. He’s still workin’ on the part about Numina, where she’s a pawn that got promoted to a second Queen. He left a scribble in the margin. ‘Queen most important piece on board, but also strongest piece’.”

Pneuma blinks. “And why are you telling me this?”

“Because the boy desperately needs an editor.” Otto laughs, and the girl at least smiles along. But the car continues. “Listen. He can’t be your King, but he’s totally fine being your Knight. More than anything, he’s scared of not having any place in your life. Things are things, fine. You’ll both figure it out. But you aren’t hurting him, lady. You’re the best thing in his life right now, and always, no matter what you are to him.”

Pneuma closes her eyes to stop the tears coming, and buries her face against a warm and supportive hood.

A few minutes pass before Pneuma tries to form words again. “Hey. That composition book… where is it?”

“Why?” Otto rumbles quietly. “You planning on readin’ the boss’s private poetry?”

“No!” Pneuma does her level best to sound hurt and offended at the accusation. But the idea of actually doing it, the transgression of it, uncorks a deeply-buried mirth that bubbles out into uncontrollable giggling. “No!” she repeats, grinning as she tries and fails to retain self-control. The laughter infects Otto, and the two give into it together.

This feeling… I have a brain. I have a mind. I have emotions. Adam saw… virtue?.. in me. I wonder if it means I have a soul too. I wish I knew a way to be sure. Someone who would know, positively. But… whatever a soul is, I have to think this is what it feels like.

“What is it?” she asks. Feelings of fear, hope, affection, depression… what else is there for her to experience tonight?

Pneuma practically falls off the hood in her haste to reach the bathroom. 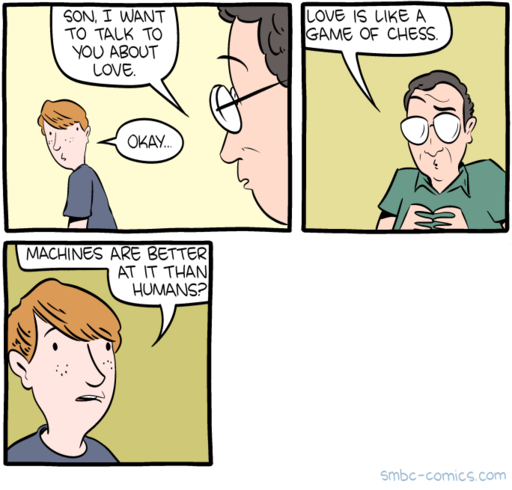 That is distressingly accurate for our group.

Pneuma is asleep. Otto regards her with a warm smile - though nobody can see his face now. Must have been exhausting. Can’t play games. Hmm. Time to log in!

He finds a comment about tires on the car forums, and decides to school this ignoramus.

Okay, listen. First, your tires carry a lot of weight. Your car’s moving very fast, and all that pressure goes into the tires. The whole thing depends on your tires being able to handle the load you’re gonna put on them. Choose wisely.

Second, different tires carry different weights. The ones out in the lead, up front, experience very different pressures from the rest. That doesn’t mean more, just different. That means you take care of each tire differently. The tires also balance each other out, supporting and distributing pressure.

This is why you rotate tires. If one tire is in the same position for a long time, it gets out of sync with the rest and wears down faster. It sounds weird, but rotating tires between positions can give each tire a much needed break.

Your tires can last a long, long time. Newer tires can mix with old ones just fine. The important thing isn’t age, but reliability. Take good care of them, and they’ll always take care of you.

The scene is like the city of Agrabah from “Aladdin”, built on torrid desert sands. Somehow, everyone’s father has allied into DRED, an evil organization. One of the Ds stands for Dad. She’s not sure about the rest.

Byron Quill is a giant mechanical head, mounted atop a scaled up Quill hoverdisc. The head’s jutting chin is itself another face, apparently Alycia’s father Achilles Chin. The mouth swallows Jason up, then somehow grows a torso and puts on a black T-shirt with brawny metal arms. The shirt is ill-fitting.

Charlotte’s father is a skinless skeleton with flaming red eye sockets. It rises from the grave, sending soil flying everywhere. Charlotte rides toward him like a battle princess, primly sidesaddle astride a galloping pony, but she is swept up by a bony claw and imprisoned in a rib cage that grows shut around her.

Sergeant Amari is a hulking man, an impossibly muscular brute whose suit and tie strain whenever his muscles flex. He throws Concord’s own scarf around his neck to choke him, then handcuffs the boy as he struggles. He’s chomping on a lit cigar that seems far too large for his mouth, and every time he yells, Adam grows smaller and smaller.

Harry’s father, the Silver Streak, is nothing but a gigantic head that fills the dream perspective. His face is blandly smiling, like a New Age guru hopped up on mushrooms, and he just keeps calmly reciting phrases like “eat your vegetables” or “the top marginal tax rate”. No matter how fast Harry runs away, Streak is always behind him, and it becomes clear that the two are actually tethered together. He can somehow hurl giant pancakes out of his mouth, which impede Harry’s path and finally knock him down.

Rossum is the worst. He comes for Pneuma, personally, a vast and forbidding shadow that rumbles out of a thunderstorm that rolls through the sky. The scene drops into a classroom, where all the teachers are Rossum, and all of the lessons are interrupted by thugs breaking into the classroom, accosting the girls, and pushing the boys around. The teachers don’t care, and harshly punish all the students for failing to pay attention. Pneuma can see herself there, wearing a ridiculously overdone Catholic school uniform. She is shackled to a desk, unable to move.

Having immobilized the world’s heroes, DRED moves onto its plan, which involves turning all the world’s ice cream into milkshakes. Pneuma is honestly not sure about this part of the dream.

Suddenly! A knight arrives, riding on top of an armored horse. But the horse is Otto, and the knight has a princess on the back of the horse, and it’s Leo, and the princess - also in armor - is Pneuma. Or Numina. Yes, probably Numina. Sir Leo charges in, disrupting the hold that each father holds over their child. Jason gets his shirt back. Harry drinks all the milkshakes at super-speed. Charlotte breaks out of the rib-cage. Adam grows tall, and his scarf turns into a freeway that everyone rides up to defeat DRED.

The villains are all at the top of Mount Fuji, which is growing out of the desert. Sir Leo combines with horse-Otto, and then a giant metal hawk swoops in and combines as well, giving the pair wings. Streak hurls eggplants at the combination, but to no avail. Mount Fuji erupts with maple syrup.

Pneuma blinks her way back to consciousness. She’s still in the garage, still resting on Otto.

What the heck was that?

I recommend a lighter weight lubricant.

The hatsuyume is the first dream of the new year, a Japanese tradition Leo was exposed to when one of his mothers was Mrs. Yamada. It’s considered especially good fortune for the new year to dream of Fuji, a hawk, and eggplant. Link is designing a robot hawk already, Mr. Gale provided the eggplant, so I’ll thank Fuji for making a guest appearance and ensuring 2018 will be a good year. Happy New Years to everyone.