MENAGERIE #37 - INTO THE MIND OF SILVER STREAK!

Harry, Leo, and Concord are in Silver Streak’s psyche – the HHL HQ Room, where his guilt came to a head (back in #20!)

Ghost Girl and Alycia touched base, finally getting Parker fed up with Alycia’s kvetching about being incarcerated.

[This is concurrent to Charlotte and Alycia’s chat.]

Harry and Leo, and Concord. Shadowy figures of the HHL and of the Menagerie. Streak is sitting at his seat with the ball of energy twine tesseracting in front of him on the desk in “anxiety yellow”.

Harry does NOT poke the anxiety ball. [Assess … 7!]

What’s different from last time? Last time there was anxiety shadow around Hecate, around the Menagerie, blue around Tempest. Now … more color around the HHL.

Everyone is almost a parody, poorly animated, saying very stereotypical things, Voltron-emoting. “Fire Island Players” … kind of how Streak sees people … Harry has a halo, but is bothered by everything … Leo is super-righteous … Shadow Adam is just watching with chibi eyes … Jason is moping in the corner, kicking himself.

Hecate is over there, hissing at everyone, sounding like the Wicked Witch of the East.

They are sometimes shadowy, hollow emptiness, only coming to life when Streak pays attention to them.

“Harry, what will we do?” says Adam. And his shadow does the same, more emotive, moments later. The shadow Harry looks at his parents and shakes his head with disappointment.

Harry steps into the shadow Harry. [When Something Attempts to Control or Manipulate Your Mind – Superior … 4!] Harry steps into the Harry shadow, starts to turn like he’s going to walk to his dad, but the outer casing is resisting, causing a speedster two-places-at-once being.

Leo … throws a faceful of “I still love my Dad, so Harry …” into Streak. Goes to Streak, touches the skein, touches Streak’s shoulder …

Charlotte is in the process of making her farewells … and turns to see Concord’s image like sparklers in the air. Help!

GG to Alycia: are you coming?

Panicked look of a 12yo. A 12yo with infinite power, in a panic. Yeesh. (Also, it’s what you’re supposed to do.)
Alycia: apologetic shrug to Parker. (Grabs gloves.)

Flings hands. Why even ask me?

GG: Apologies for having to run.

Some sort of weird psychodrama construct of the HHL HQ. (Alycia recognizes from pictures.)

[TEAM: Harry is leading. (Not Influence over Alycia.) (Not all for the same purpose.) (Adam mistrusts Alycia, so …) ]

Link is trying to to rewire a Keynome (!). [12!] Strengthening Streak by letting him know that forgiveness is possible.

Harry is struggling to pull his head back from the shadow form talking to him, leading to all this weird super-speed jerking around … shadow form pulls away, losing cohesion, Harry drops to his knees. [Take a Powerful Blow - 8!] Adam shouts at him, tough-love [losing Infl], “Damnit, Harry, I have better things to do here than helping you with your dad!”
(Adam’s not sure if he really wanted to say that – is it just this place?)
Harry gives Adam sad, puppy-dog eyes.

Link’s “attack” comes home – Streak focuses on Link (who gets anime whizzies behind him) shakes it off, stands up, stands back, looking around, blinking, “What – where are we?”
H: Plenty of time when we get out of here.
S: I’m ready to get out of here, buddy.

All the other HHL members stand up, look menacing.

Ball of yarn is more red now, and streaming like steam to reestablish a connection with Streak. Charlotte can tell it’s a … sliver of a keynome?
Charlotte … it feels like when she and Jason were both in Jason’s head together. But with better VR.

HHL all looking menacing. The Menagerie doubles? Harry mannequin is out. The rest are all sort of looking to their counterparts. (Jason is looking at Alycia.) _White blood cells._
Alycia slowly pulling on gloves, waiting for a moment.

Adam - looking around for the Concordance. [Assess: 13!] Everything here is more real and dangerous because of that thing on the table.
Oh, and that’s the thing that can be used to find out if they’re watching.

“Mr Gale! When you were with the Vyortovians, did you touch a little metal sphere with light coming out of it?”
“Yeah …”

Charlotte - C&S [In Good Spirits] on Streak – you’ve been a hero, great dad, supportive, look up to you … [8!] [Directly Engaging a Threat] --> creating an opportunity for allies, showing a route to beating this.
Streak sees this – stands straighter.

Hecate hisses – “Get away from him, you abomination!” Eldritch bolts against Charlotte. [Take a Powerful Blow] [2!] Attack dissipates before it touches her.

Harry – that’s how you can get to your dad. Talks to his dad. Hug. “Mom is waiting for us back home.” [9! Charlotte assists – squeeze on the shoulder – to bring it to a 10]
Directly Engage -
All the shadowy figures extend their arm to do something …

Concord - [Burn, +1 - 8!] Reaches out to take in its power, sucking power from tangle, sucking in the essences of the mannikins, too, energy from teh globe, the walls, the table … with the hospital room on the other side of it. All goes white …

… and we’re all standing around Streak’s bed. Tempest is there - starts to see Charlotte and Alycia.
Streak - “That was really weird. Hey, sweetie!”
Gasp, tears.
Concord in full energy mode.
“Glad to have you home, Dad.”
“Glad to be here – that was really --” 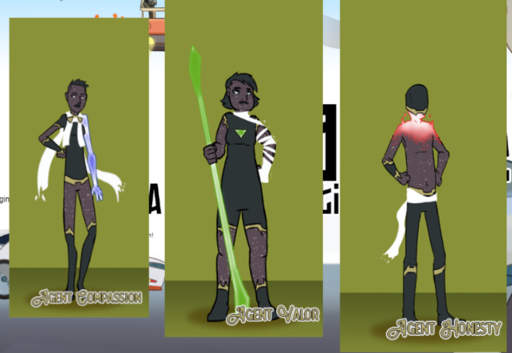 The entire wall of the hospital rips away … and the three Concordance agents are floating there.
“WHAT. HAVE. YOU. DONE?”

I think Leo’s only checklist items are Vector/the Bad Future, and his parental situation. After that?

At your option, “confront Link about being a mind-altering fembot-loving pervert bad guy scumbag”. Might also overlap with beating people with shock batons in item 5.

Though, to be honest, Alycia’s planning (this time for sure!) a longer game to learn more before diving in with the shock batons. Of course, she’s not been good about such resolutions (he said, rereading stuff).

There’s also a possibility that Summer might mention the whole thing (or more likely have it dragged from her) by Leo (or, even more likely, Aria), leading to Alycia’s hypothetical front door being kicked in by an irritated Newman family member.