Summer has just flipped a coin … and it’s standing on edge.

Alycia thinks anyone here could probably do it.

Aria is thinking – points behind Alycia at the coin … and the coin is vibrating slightly in position. Reality is rebelling against the question being asked – or defining an answer.

Well, this is weird.

The wind stops. Then rushing the other direction.

Pietro is thrilled that they seem to be rising again … for 20 seconds. Then fall again.

Biggest threat? Not getting the inertial feeling in the gut of falling / rising / pausing. Biggest threat? Whatever nearby is breathing on him while he hangs in mid-air.

What can I use? Something for more light. Call on Pietro to shine light toward the stinking breath.

They illuminate the whole direction indicated …

Summer wants to come. Wants to be of use. Burst of butterflies Costume!

Alycia: That is amazingly … you.

Offers to carry over.

I need to get a mask on. Um, to protect my identity.

Alycia has her bike nearby. It can get to her quickly.

First time they’ve really acted in unison in a while.

(Jason - getting the ops team online. Give a call if you need help.)

(Leo - act of will on his part to BE. RETIRED. Aria restrains him lightly anyway.)

Mercury then Radiance then Charade arrive at the graveyard.

Mercury checks the graveyard for weirdness.

What do you intend to do?

What do you want me to do?

What is the graveyard really planning?

All the headstones look pretty normal. Realize after a moment that most of the dates on the stones – the death dates – is 2018, last few weeks. And these are not new stones (birthdates far in the past), though all the carving is crisp. Always in clumps – 75 from the 13th, 150 from the 14th …

If Charlotte’s plot is on the hill, about 2/5 of the cemetery shows this effect.

Summer is frowning as he goes through this. “I’m investigating the graveyard for clues.” Explains to her what’s going on. She has him take two of her butterfly drones along.

Also, there are a *lot* more gravestones than there have been in the past.

Alycia rides up. Harry has butterflies in his hand. Summer is projecting 3D representation of a portion of the cemetery. Sidebars. Data analysis.

If that circle is accurate, that’s enveloping the wound – oh, wait, the wound’s not there, because the butterflies keep working.

Gravestones are way too dense for burials.

Aaaand, the gravestones also include references to other cities. Always, “Gave up their life on behalf of …” “Passed in the service of …”

Outside of the green circle, date and non-local stuff is hit or miss.

Harry - Hey, Alycia … in the AltFuture, and all the ghosts that had been

What if our Charlote has been closing the wounds … and these are the graves of the spirits who were destroyed in doing so?

Charlotte’s headstone also has a date … from three days ago. “Perished.”

This is either the creepiest suicide note ever, or a 500-yard wide cry for help.

They are suspended over a vast face. Somewhat asleep. Moving and undulating, Frozen rictus, even as the air flows past them. 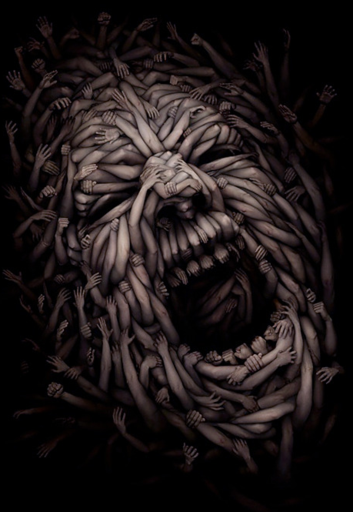 As bright as Pietro is, it’s only covering the face. There’s an impression of a body. And there’s still more beyond, shapes that cannot be filled in.

Pietro is quietly losing his shit.

Huh. That crazy guy who was talking about Pandemonium …? Maybe not so crazy.

Drawn by the bright light …

Mouth extends … in an “O” … pouring outward to a firehose jet tentacle-like of arms, crashing into Pietro.

Adam tries to envelop himself and Pietro in a ball of fame.

Expose self to danger.

Face PoV: It burns! But it also reestablishes a connection with a place of warmth and starshine and air and living things and reality. Oh, and it reaches through that connection, that link, to the space beyond, where this burning power is from.

Back in the Cemetery

Looking at Charlotte’s tombstone. That’s not a good sign.

Suddenly the grave markers all around, and the ground shudders, and the sod tears, and the markers rise up on pillars of earth and slime, all around us, undulating, drawing back away from us, then lunging in. (Like Corpse Finger Fungus.) 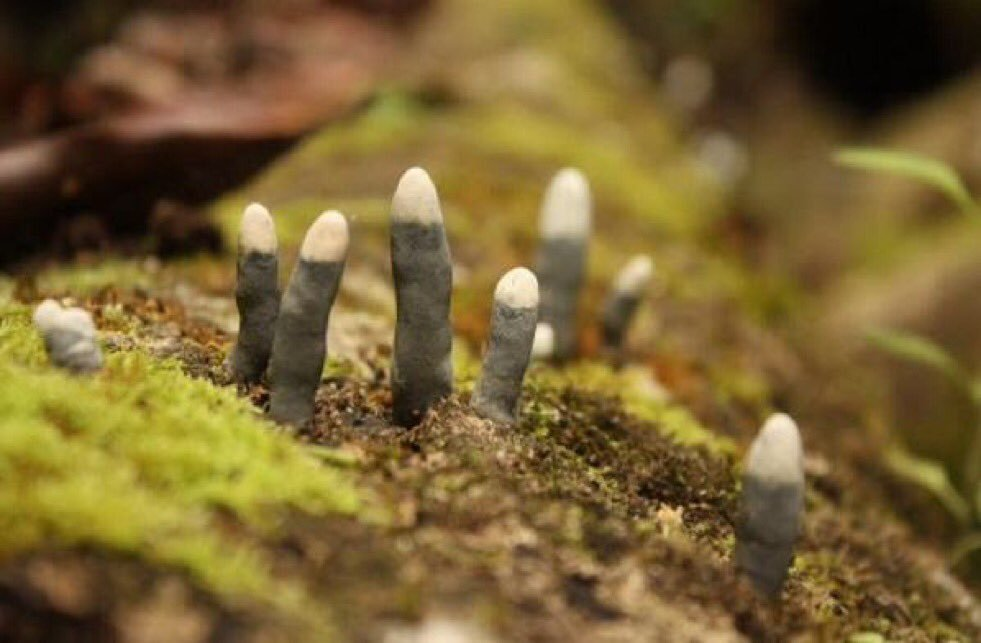 Harry grabs Alycia and runs. Because Summer can save herself …

Add Team to the Pool.

Summer takes to the sky and tries to get distance. Anyone else in danger?

Fingers lunge at Summer, and also toward Harry/Alycia.

Out of their reach, distracting them away.

Adam: Image of Self …

Harry: Closer to the Team (Summer)

Summer: Closer to the Team (Harry) [butterflies, saved room mate (which would have done if Harry hadnt)]

(Yes, everyone seems to want to SAVE ALYCIA. DAMMIT.) 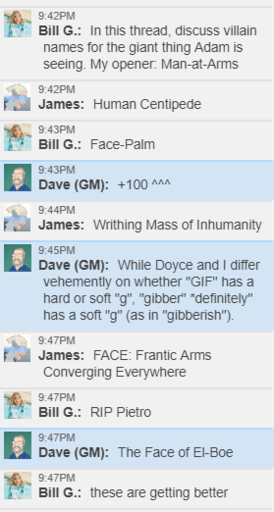 3. And, honestly, Jason I feel a wriggle of joy and triumph about that every time it comes up. He’s I’m pleased to have played a role, intentionally or not, in Summer’s personhood and identity and tech.

4. Jason will be 3 parts enthusiastic, 1 part obligatorily, politely complementary about her fashion sense. Alycia … will likely have a chat with her about this some time (soon).