This is an attempt to capture the major relationships in the game. This is not an exhaustive map of your “passive” or “offscreen” relationships, nor to list every NPC in the game. Rather, it’s meant to show the PCs, the NPCs who they most commonly interact with or are associated with, and also those NPC relationships.

So this certainly pushes into some non-critical connections, but it does include some important ones. 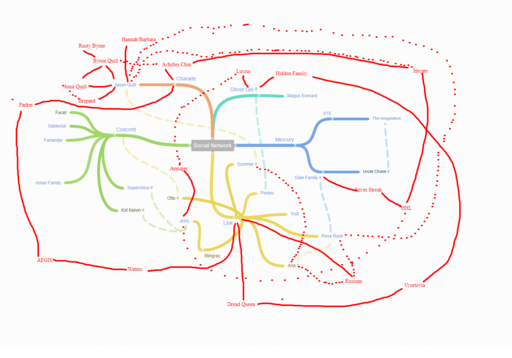 (Yeah, I know, Brigand isn’t exactly a critical connection. On the other hand, I realize I neglected to dotted-line Aria and Hecate, which is certainly a potentially significant hanging thread.)

I tried to stay pretty strict to keep it from snowballing this way, honestly. My guideline was something like: “have I seen a scene between X and Y that I think is integral to the game’s plot?” Or alternately, “which X and Y pairs had some tension that pushed game events forward?”

What does this mean? Rossum is pretty critical to understanding Link, but we’ve never really had a Rossum-Link interaction (outside flashbacks). There hasn’t been a scene between the two where some stakes came into play. Same with Waters, his good-guy counterpart. Same with the Dread Queen, who has obviously influenced the plot heavily, but who hasn’t really interacted with us. Troll did make the cut, because he’s come back at least once and Link/Otto enjoyed the rematch on a personal level.

I wanted something that served as an indirect metric of involvement in the game - not just “screen time” or time dedicated to plots, but how rich the interactions have been between characters. If I looked at this as GM or as Ghost Girl’s player, for example, I’d be thinking “maybe hooking into some supporting cast would be cool”. While GG has some connections in the abstract, I don’t recall that she’s actually interacted with Hidden Family NPCs - if she had (or when she does), they’d definitely go on here.I’d also see that Concord has done a good job of keeping up social links, and Mercury’s links have been mostly focused around his Legacy (here’s my family, here’s members of another superteam, here’s another team people thought I’d join, here’s the adult team I might be expected to graduate into…).

Finally, I left a lot of Jason’s potential links out for simplicity, because there’s quite a lot of material there - the Jason/Byron/Hecate/HHL/etc. John Madden playbook - that feels pretty well resolved. I wanted this to be forward-looking, rather than commemorative.

And that all makes sense. That said, I’m not sure I’d say the Rossum-message-in-Aria was stakeless, or that, forward-looking, the Rossum/Rook thing isn’t going to bite us badly. Ditto Hecate and the relationship to the HHL (and, heck, the HHL).

Eliding most of the Jason drama, on the other hand, makes perfect sense. As do a number of your other observations / criteria. I can certainly see your arguments all around.

Aria-Hecate would have made the cut if their scene had gone anywhere, I think. As it was, she goes and has a conversation, gets some information, comes home to a Comfort & Support from Leo, and then… doesn’t tell Jason about his mom because (he figured it out/he was tired/bigger things went on). Rossum-Aria wasn’t really a scene in this sense, just some information the GM gave us.

I do hope we’ll see more activity from the HHL, but I also predict it’ll happen along Mercury’s route. Either we’ll try to pull Streak out of his coma, or someone in the HHL will have an opinion on negotiating with the Dread Queen (they seemed pretty strict about interacting with Vyortovia when we first met them, how has that position changed?), or whatever. If Hecate does re-approach Aria, I’d be interested in seeing how that goes, but I imagine she’s crawled into her hole for quite awhile.

I started this type of visualization with my Thursday game, shown here: https://coggle.it/diagram/WqobVSxJ5_wlvfVf/t/-/629…

If you had to guess, could you determine who was the socially withdrawn Transformed?

Bill’s last post is giving me agita for everything that’s happening that we’re not getting addressed. It’s such a clear illustration of why we can have seven or eight sessions in a row that only take up 3 hours of time in the game, and why plots don’t move forward any faster. There’s just so much stuff going on.

I’m really starting to understand while DC and Marvel has these Universe housecleaning events every 5 to 10 years.

Bill’s last post is giving me agita for everything that’s happening that we’re not getting addressed. It’s such a clear illustration of why we can have seven or eight sessions in a row that only take up 3 hours of time in the game, and why plots don’t move forward any faster. There’s just so much stuff going on.

I have my own opinions about that particular topic (mostly just “if everyone is having fun, don’t worry about how quickly you are progressing through something”) however, I think it probably needs its own thread so it doesn’t make this one meander away from Bill’s awesome work–Speaking of which, I’m glad you got to this before I did. Mine would have looked like one of those crazy X-Men relationship maps.

I agree with Mike, as long as everyone’s having fun, a particular pace is probably okay. I’m not worried about pace, but about face.

The game rules themselves seem to favor engaging with characters rather than plots, and “the plot” is just the outcome of those character interactions. I think it’s deliberate that there’s no basic move for “analyze the phenomenon”, all you have is in-the-now tactical stuff like assess (whose questions are built around an immediate conflict) or unleash (where “extend your senses” is left very loosely defined). But the rest (pierce the mask, comfort and support, provoke, influence) are rich tools for using NPCs as the levers of shifting plot around.

In Thursday Masks, the PCs aren’t “stopping industrial espionage”, they’re chasing this emotionally wounded kid with a vendetta against his industrialist dad. There’s a face to the plot that makes them able to relate to it and their moves all make sense. In that same vein, Link & Concord have JHHL links such as Stingray because that’s our face on “teen hero rivalry”.

That’s sometimes tough for us, because a lot of the 1-30 story for us has been “deal with this Negative Space Wedgie” (the Sepiaverse) and “figure out the mystery of who used it/what it’s doing/who came out of it” (Vyortovia, Byron Quill’s disappearance) - big cosmic concepts that don’t ground easily into one or a few NPCs where we’d navigate the plot via character interactions. But (for example) if we came up with plots like “stop the HHL from enacting today’s ridiculousness”, I could look at a graph like this and think “hm, who’s best at this? Oh, Concord->Superchica, Harry->Gale Family, and Link->Stingray” and then those guys would go make their social moves.

Looking at the checklist, we’ll see that almost all of the items have faces attached already. The exception is #2 (Pandemonium), where I’d expect there to be a cult or something on the bad guy side, and (by default) the Grail Knights like Armiger and Lucius as the faces of the good-guy side. #5 and #8 don’t name names but are all about interactions with individuals by nature. So it sounds like we’re in good shape there as well.

I pretty much agree with everything Bill said.

It’s something I keep smacking up against in Masks – it’s not about doing stuff, it’s about growing up and the relationships you have doing so. The “stuff” is set pieces (good set pieces, mind you) – but the Jason-Alycia-Summer-Pneuma-Leo Love Pentagon would still be a focus no matter who went to the Sepiaverse, or if Pandemonium descended to Earth, or if we decided to go together to Six Flags Over Halcyon on Saturday.

Do I want to see those events all come to pass? Absotively – but not because I’m on a time table or because I’m only having fun if I get enough XP defeating Vyortovian soldiers to ding the next level, but because it provides more grist for the RP mill. And whenever they happen, other stuff will be going on that’s also fun. Because our characters growing up into adults and choosing their destiny will happen regardless of the action.

Bill put it perfectly (talking kind of about something sort of in parallel) – my enjoyment here is based on:

not just “screen time” or time dedicated to plots, but how rich the interactions have been between characters

In Thursday Masks, the PCs aren’t “stopping industrial espionage”, they’re chasing this emotionally wounded kid with a vendetta against his industrialist dad. There’s a face to the plot that makes them able to relate to it and their moves all make sense. In that same vein, Link & Concord have JHHL links such as Stingray because that’s our face on “teen hero rivalry”.

This. Everything Bill said is great, but this is the part I agree with the most.

And to add into Bill’s mentioning about what the moves care about, look at what the game rewards you for - growing closer to people and failing. Growing closer to the team at the end of the session, opening up to a Comfort or Support, and rolling 6- (and maybe some specific things from the individual playbooks, but they generally fall into those two categories too).

That means the game wants you to interact with people in ways that make you closer to them, and to make a lot of rolls (opening up new complications via GM moves in response to those rolls). It doesn’t really care if you save the day or complete plots, it wants you to do those two things. (Along that same line, D&D wants you to kill things and take their stuff, hence the common murder-hobo mentality.) And honestly, I think we’ve been succeeding at most of that (the rolls are fairly infrequent *cough*episode 29*cough*, but we tend to hit the emotional beats pretty well).

Episode 29 is being blamed on the writing staff not knowing what to do with the start of season 2.

Thanks for the input guys it is really really helpful to help me sort of refocus things. in fact I might even go back to that GM check list thread and rephrase it a bit in this context. I think that might be really helpful.