Vote in this post. Add discussions, questions, etc. as replies to this topic.

I picked the Firedrake just because “fight the power” seems like a cause I can get behind. Not opposed to the other two, but the Firedrake sounds good.

Stardancer, both because I’m a Firefly STILL SAD Fan, and because Firedrake feels Star Wars-y, and we’ve done that.

That said, I am good for any of them. 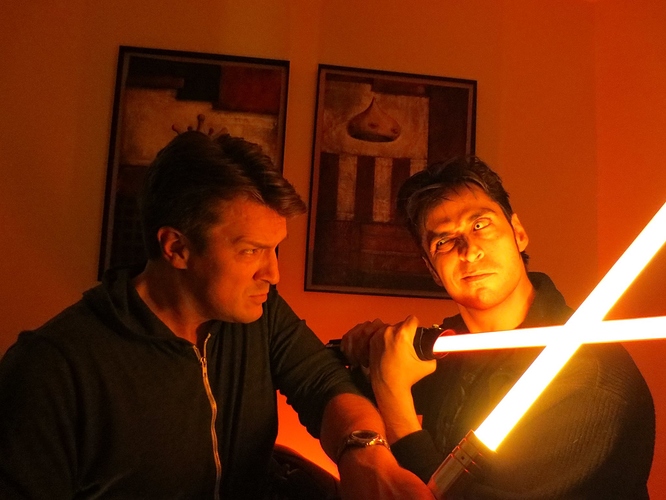 I’m really good for any of them - I clicked by accident.

I’ll close the poll next week, but for now it looks like Stardancer beats Firedrake by a vote.

I am a-ok with this.

Oh, I almost forgot the most important decision in all of this…

Are we keeping the default name for the ship? Stardancer’s cool, but I don’t know if anyone else has opinions.

The obvious answer is a ship named Menagerie. Just sayin’.

The obvious answer is a ship named Menagerie. Just sayin’.

With the reputation we’re leaning towards, this particularly apt.

Hmm, I just noticed that of all the ship the Cerberus is the Voltron choice. Why? The Personal Vehicles unique upgrade. Have someone stay behind to control it (Coran, maybe the Engineer?) while the rest of the crew (the Paladins) fly out and act as the fighters defending the ship (the Castle of Lions).

Not a serious suggestion but it is funny trying to think of how to recreate certain things with the mechanics presented in the game.

I’m still navigating my way through the crew/ship creation stuff and trying to see how it all comes together during the first session. It’s… not spelled out as clearly as I might like [1]. There’s a bit of terminology that similar enough but clearly meant to be Different Things (Qualities/Upgrades/Special Abilities) that I’m left fairly certain I’ll screw something up in there. We shall see.

[1]: And don’t get me started on Veteran Advances, mentioned on page 57 and explained… no where I’ve been able to find. #wth

[1]: And don’t get me started on Veteran Advances, mentioned on page 57 and explained… no where I’ve been able to find. #wth

Literally explained nowhere but the playbooks… which aren’t actually in the text of the book, anywhere.

It might be because my familiarity with Blades, but most of the stuff seems relatively straight forward. Usually the only thing i can think of that trips people up is Tier because its effects aren’t immediately obvious.

It’s usually when the GM starts saying stuff like “well the opponent is Tier 2 and therefore is decked out in Tier 2 armor and your gang is Tier 0, but you have Quality weapons so they count as Tier 1, so you’re going to have Limited Effect,” when people tend to start getting it. Or get further lost.

That’s the biggest problem I’ve had with the actual plays I’ve been watching. The GM keeps trying to focus on the fiction, and keeps kind of hiding all of the math as much as possible, which means figuring out how the hell it all goes together is… Obscured.

Literally explained nowhere but the playbooks… which aren’t actually in the text of the book, anywhere.

I figured in context it was something like that, but hadn’t realized it wasn’t spelled out anyplace.

It’s usually when the GM starts saying stuff like “well the opponent is Tier 2 and therefore is decked out in Tier 2 armor and your gang is Tier 0, but you have Quality weapons so they count as Tier 1, so you’re going to have Limited Effect,” when people tend to start getting it. Or get further lost.

Yeah, there are aspects that seemed, as I was reading through, to be, “Uh-huh, yeah, makes sense, all right, got that, yeah it figures, of course, yeah, uh-huh, gotta add that, of course, that follows … yeah, I’m going to be assuming that Doyce will have it all straight because there are a lot more factors than I can juggle in my head.”

I mean, it all makes sense. There’s just a lot of it making sense. It’s crunchy in an abstracted but good way. I can’t point to anything that seems unnecessary, and my assumption is that, yes, it will either start to all click together like an orrery when we get started, or I’ll just follow the fiction and roll the number of dice I’m told and hope I’m not doing something stupid.

Well as I might have mentioned last week, my Sunday night group is now playing Blades in the Dark and I’m GMing. This afternoon (in about 2 and a half hours) we went through crew and character generation and then did a score.

The first thing I did was call for a roll and not play attention to level of effect and didn’t have solid consequences in mind. This led to a lot of “uhm…” when the player rolled a 3 on three dice until I said “yeah, I screwed that up, I’ll try to keep that in mind next time.” And honestly as soon as I started to, things just started flowing better.

Things I Realized In Hindsight:

And finally, for Dave’s gif about flow charts… 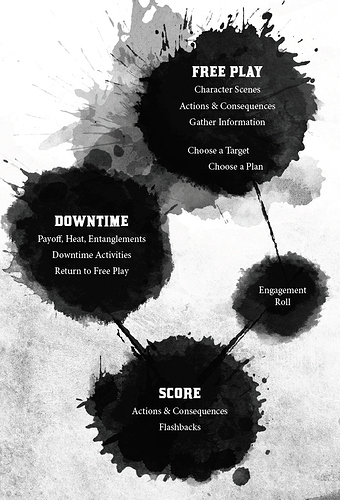 In hunting down the answer, I am given to understand this particular rule was something that evolved during beta testing, was discussed several times in the G+ community, and is just a bit of tribal knowledge/pbta-assumption, supported by one line on the play sheet.

At least scum and villainy actually has that line in the book; blades in the dark doesn’t even have that - there’s a whole section on special abilities that you can pick up out on page 275 or something, with no actual explanation of how the hell you get them… unless you look at the play books (and pay special attention to the fact it says “take advances from other sources”, not just “other playbooks.” (Which aren’t in the rule book anywhere.)

If I can call out a single repetitive sin pbta and by inheritance forged in the dark games have, it’s that all the rules for basic play aren’t in a single text.

It’s been like that since the beta documents Vincent first released for Apocalypse World - it’s one of the reasons I didn’t like the game initially, cuz I needed nine different… excuse me eleven different documents to read the damn game. From an archival/preservation/historical pov, it makes my skin crawl.