Random Thought on the [System]

My favorite thing about PBTA games in general and Masks in particular is how the dice regularly inject unexpected elements into the game.

I mean, at some point, I should go through the main events that have occurred in our game and point out the stuff that simply wouldn’t have been without a ‘bad’ dice roll, but I honestly don’t know if I could; they are legion and, by this point, integral elements of the story.

Off the top of my head, without checking on any logs or anything for reminders, stuff that has been introduced solely because of an unexpected 6- include:

I mean, I could stop there, really. But…

There are more, and none of this counts the stuff I’d thought of and just got to introduce thanks to a 6. This was stuff that just… had to be adlibbed when a 6 came up and ended up being awesome.

There are also some pretty cool things that have happened because of the 12+ stuff as well, to be fair.

The 6-'s and 10+'s serve two very distinct roles, even if both of them can require some ad libbing.

The 10+'s are the climactic moments – by installment, by act, by scene – that mark the hero’s success. The feel-good parts of the tale. The fist-pumping YES! moments. R2 and 3PO getting to the escape pod. Ben scaring off the Sand People. Ben turning from kindly old man to deadliest man in the bar. Han gacking Greedo before the other can get his shot off. Making the jump to Light Speed. Luke making the swing across the (inexplicable) shaft. Ben turning off the closely guarded tractor beam. Luke nailing his first TIE fighter. Luke nailing the Death Star. Utterly important payoffs for everything that has happened. 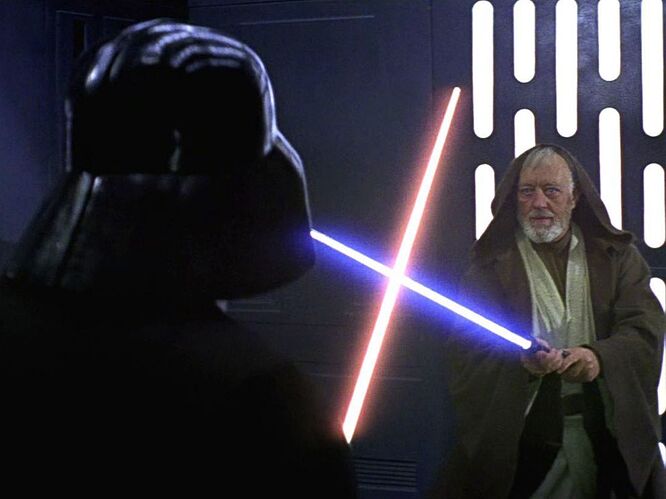 992×744 59.8 KB
The 6-'s are the everything that has happened that makes those 12+'s so great. Artoo being nabbed by Jawas as he tries to escape the Empire and find safety. Luke’s aunt and uncle being killed before he can get there. Leia’s defiance leading to Alderaan’s destruction. Han’s failure to quicktalk the security chief leading to “company” coming. Obi-Wan’s successful use of the Force to get to the tractor beam controls confirming Vader’s suspicions that he’s aboard, marking off the final check on his Doomtrack. Vader’s victory over Obi-Wan freeing the latter to become a meddling Force Ghost. The Falcon’s “too easy” escape from the Death Star being part of an Imperial plan, leading to the Rebel Base being discovered. They are foundation everything that happens that’s exciting. They make the 10+ victories meaningful because the graph doesn’t have to start from 0, but from a negative value.

I have to say, I have played plenty of games and systems that touted “failure is cool, because failure leads to new and interesting things.” I don’t think I’ve ever seen it work as well as what’s going on here.

A lot those examples you give in the middle paragraph are 7 to 9 results where you get what you want but at a cost, and honestly those are pretty damn awesome too.

Success at a cost is always cool. I was going based on the p. 32 text:

A miss, 6 or less, isn’t the same as failure. It just means the GM gets full say over what happens next, and chances are you won’t like it. The GM will probably make things worse for you in some way, tighten the screws more, but it doesn’t have to be the worst possible thing that could happen, and it doesn’t even mean you actually failed. Some of the most interesting misses give you exactly what you wanted, in the worst possible way.

The difference between a 6- and a 7-9 (distorted version or major costs) seems a gradation of the cost/negative impact, and who dictates it.

(I’m not being pedantic; if I’m misunderstanding a fundamental principle here I wanted to understand it better. I also don’t want to take away from the thesis that how consequences come down in this game is working very, very well.)

Not at all you absolutely got it.