@garrett, because we talked about this last night, figured I would bring it up on the forums for tracking.

The character sheet for Ironforged is good, but it’s also way too much for a beginner in my opinion. 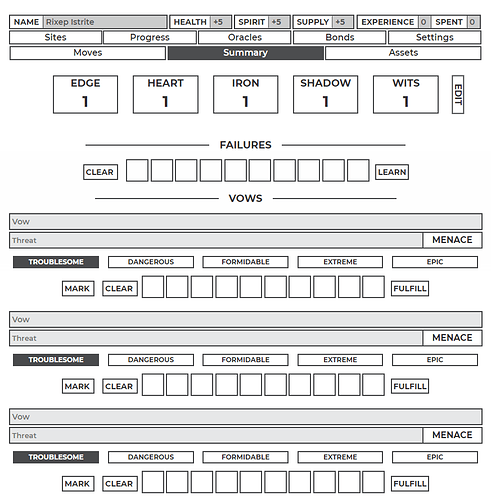 image873×889 37.6 KB
(screenshot of the default character sheet, which comes with all the options already enabled)

I figure I would voice out a small wishlist of features for a character sheet and see what you could tell is/isn’t feasible in a week or two.

Again, all of these are solvable without having to modify the backend of the character sheet, they’re just nice to have.

I’ll be editing the custom sheet live. There’s two sheets up, a test PC and a shared sheet.

Checklist (this is just for me, don’t reply to this):

For those playing along at home, here’s where we are at 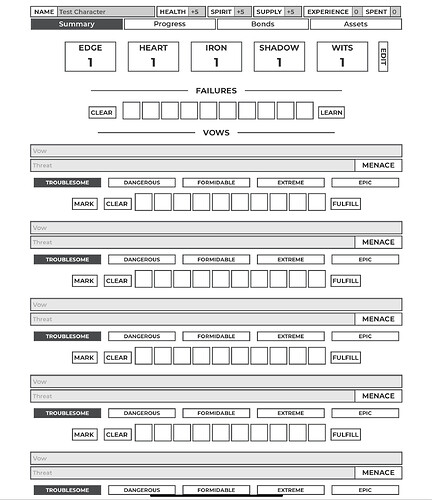 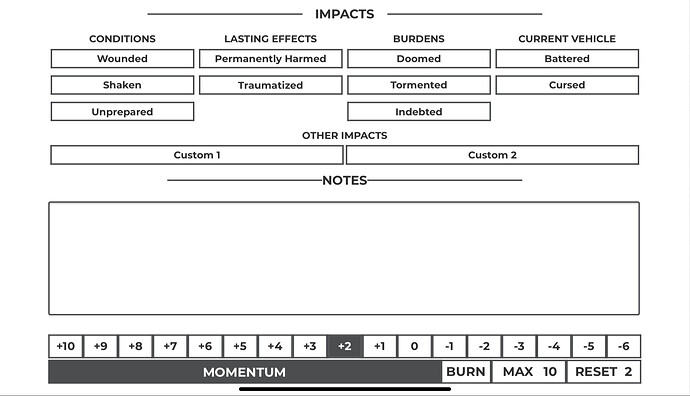 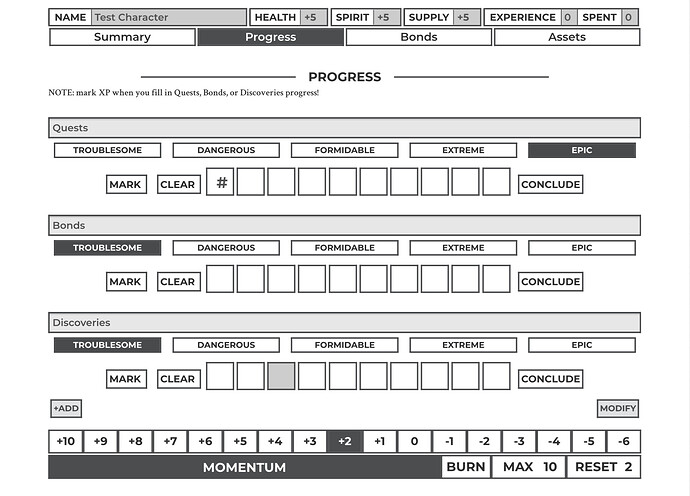 Bill, took a look and you’ve basically covered everything in like a day. Great job.

The only thing that jumped out at me as something was the Bonds track on the top of the Bonds tab. Might cause confusion with the Bonds track in progress tab. Feel comfortable removing that track? Sorry for the late addition.

Sure. I assume I should still keep that tab for individual bonds/contacts/whatever?

Probably a good idea for now, since NPC relationships are a thing.

Okay, done. If you feel like letting this bake for a bit, the game will stay up. If you think we’re ready, I’ll share out the modified HTML and CSS files

The Paths (at least) in the character sheets in the game appear to be (I’m guessing) Ironbound, not the Starforged assets. (Navigator doesn’t show up, and even Devotant has different text in it).

I’m happy to modify some text for the ones I chose from the drop-down, but that doesn’t seem to be an option.

I’m happy to modify some text for the ones I chose from the drop-down, but that doesn’t seem to be an option

Yeah, all of the assets will be the Ironsworn versions of them, not the Starforged versions. You can write in your own, you just need to use CUSTOM option from the dropdown. But if that is confusing, let me know and I can fill them in.

Ah! No, “CUSTOM” is fine. I obviously didn’t peer at it closely enough.

As advance warning to all, the text box editor is a bit crude (no underscoring, and it word wraps everything regardless of carriage returns or spaces added). For myself, I used all-caps for moves in the Asset descriptions, and “(A)” “(B)” for bulleted choices. No real harm, just requires a bit more squinting when glancing at Assets.

Yeah, looks like an issue. I could fix this by just manually adding the assets to the character sheet, but I don’t want to unless it is helpful (or if this is too much of a pain in the butt). We’ll see how it goes after the first game.

I really don’t think it will be that big a deal, more wanted to give people a heads up before they did careful spacing and typography.