Scroll 03 - An Assembly of Small Assemblages

Bao:
==> General: I promised my father ZHENG that I would aid the troublemaker SUN.
Romantic: I love LEI, but their dear friend, ZEMIN, considers me beneath them.
Comedy should ensue.

Front group of the court heading out, sister-in-law with, abbot. Lots of meaningful glances between the court elders.

When Shu left, Zemin filled in her position. Acting as a member of the court, escorting her, gesturing “Let’s talk.” Su Ning would rather be speaking with others, so …

But first, concern over Sun’s plans, but, let’s go, dragging her off to someplace public – chat with her as they go along, where others can hear it.

Watching Zemin walk past with the others. Go with the crowd, looking to see why Zemin has run off.

Follows Huigong to look for Lei. Yes, she’s there. Pantomime need to talk with you.

Keeps running away, back into the courtyard away from the royal entourage.

With Su Ning. Oh, yes, no much about your family, establishing bona fides. The girl with you, your sister? Oh, daughter, lovely girl. Very publicly offering a dowry for the beautiful daughter … just enough to seem odd, but knows that she doesn’t want this.

Impress her? Hearts & Minds (Fire) ==> 9!
Question: Is she planning on annulling the marriage or just lying?

Apologies. Doesn’t know what rumors are floating about that she could accept courting of her daughter. It’s extremely complicated, and she holds out hope of resolution, and could entertain such courting, but it is not the case now, and it would be improper to have such a conversation.
Makes it clear that she would like to simplify her daughter’s situation immensely. And soon. Such that her current status will be a complete non-issue.
Perhaps her noble husband, in great danger, will sadly die before he could be part of the household. It would be a grievous matter. We just need official paperwork and an abbot to make it official.
Who hates her the most in the royal family?
Lady Kai, the sister-in-law.

Quarry heading out. Prodding to get them into a quiet area. Zhi pushing Huigong forward.
Trying to get Lei’s attention.
She breaks off into a portico area …
Lei is happy to pull him into the shadows. … and Bao can see folk further into the building. Including Sun, and also Shu.

Lei is to him … someone who is genuinely nice to him, therefore on a pedestal.
When Bao is around, the sense of … all of the senses … is most offended. 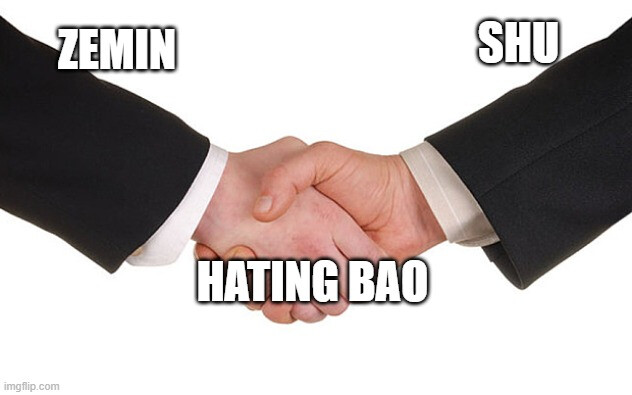 See Bao running off one direction, Lei stomping off the other direction.
But stuck with Su Ning.
Inner Conflict (Wood) ==> 12!! Not angry, but Patient with the long game.

What are the threats/dangers around Su Ning?
She has both seen and recognized Ratou, a stranger to her, though doesn’t really have any relationship. Zhi egging on Huigong. Aoshi is peeved. Su Wen is … double-taking Lan, but not sure why he recognizes her.

Ratou sees to the temples of the land. The secular arm of the temples. Clearly doesn’t like people, but dedicated to his job.

Upsetting notes. Attempting to compose, but a stranger is there.
“Sir, I do not believe we have been introduced? Why are you intruding on my privacy?”
Sun is shocked, but that’s how things are. “I am a soldier and traveler and I’ve been asked to bring you an important message, including about the Lady Su Wen. And it’s important that you know soon what they wish me to tell you.”

Shu centers herself and inquires.

“Five Coin Zemin is currently --”
“Oh, that rat-bastard.”
“–working to forestall other marriage arrangements for Su Wen.”
“Why?”
“He is an ally of Su Wen’s husband.”

Shu knows that Su Wen was married. It’s complicated. Her husband left the night of the wedding and has not been back since. And Su Wen will (sincerely) hear no ill said about him – is not enamored of him, but admiring.

Bao runs in. “I am here to serve your purpose as my father commanded … ma’am … How may I serve?”

Sun at a distance, watching Zemin.
Bao is sticking by Sun.
Sun explains, in broad terms, what is going on.

Zemin - get Sun in the know about Lady Ning.
Bao glowers at him.
Zemin glowers back.
But catches Zemin up on what he learned from Su Ning. Most likely ally is Lady Kailing.

So … get Sun in a room with Lady Kailing.

Ask Bao to go talk with Shu … she is a part of this matter, so go serve me by serving her.
She’s not been around a while.
Bao will … go in search of her (a little worried that his father might object).

Huigong, party boy, sweeps along, nabs Shu.
So, yeah, Huigong, and Lei, and Shu. (Bao is in the background)
“So, you are looking to be a body guard! Take me!” Leaps onto the well. “Face me with the stick!”
Shu looks for brother. Zemin: “Don’t embarrass yourself.”
Lightstep to the edge of the well.
Huigong is sort of messing about in melee. Not as drunk as he’s acting.
“A stick, a stick”
Bao throws a stick to her. Lantern stick.
Shu fights defensively, mostly. Nothing over the top. Playing around a bit, too. If he’s “drunk,” she’s a “delicate flower.” Until he pulls something. Then she’ll ramp up (in front of her brother).

He gives a thin smile, pushes things harder, keeps an eye on her after one thwack, the chats with Zhi, “Maybe you should be fighting in a dress, too.”
Accelerates. Does some Wuxia cartwheels that require a posed response. Increasingly frenetic.
But at a point, overconficently misread a sitch, disarm his hammer. Have figured out a pattern. Until realize it was a sucker setup. But a misstep, hem on the dress, about to go in the well, and Huigong widens his eyes, flips away the weapon, braces on the well, and catches with a waltz dip, with her face up to him, pushes both up to standing position.

And he’s … very flushed. In a way that has nothing to do with the fight.
[And all the viewers grok the look]

“An excellent bodyguard, you will be of great value to the family.”
Claps, and invokes her into … “Bodyguard of the Kung Family.”
And he claims to be drunk, and exits.

Lan – manhandle Zemin into a corner and get a brief on what’s going on.

… Kung Aoshi holding court.
… Lan paying respects to Aoshi. And, in return, deflects that back to Lan’s master. Walk with me, but mostly monologuing on nature of leadership, and how Gunlan is a recognized problem.
… Su Ning talking with the Imperial Magistrate, quietly receiving a scroll.
… Su Ning sitting with the abbot, and he shakes his head, and then the Imperial Magistrate shows up, and the abbot is happy to take papers from them.
… Gunlan watching the party leave from another courtyard. Dentien behind him, looking worried.
… Gunlan looks at the lost weapons. And walks toward the well. Still looking angry.

A very rapid and urgent knocking on Bao’s room in the castle.
“Master Bao! Your father!”
“He can wait until I wake up.”
“No! He’s been arrested under suspicion of treason! Lord Aoshi won’t wake up. They think he’s been poisoned!”

Lan - Zemin seemed to be offering himself … in marriage?

Notes to self for Bao:

Silent Sun doesn’t have an immediate next move, other than “check in with Zemin on how things are going”. He’ll try to help Shu and Bao out, if they need anything.

My money is on “Su Wen’s missing husband poisoned Lord Aoshi” being the next plot development, although that’s really the nuclear option from Su Ning. If that’s not what happens, so far so good. If It is, I want to hear how they handle the accusation, evidence, etc. - for example, did they find some patsy to frame and execute, or is it just hearsay?

I think I’m mostly up to speed on what happened after I had to dip, so here’s my notes for next time:

Confer with Silent Sun. Since we’re at “next morning” time, it might be worthwhile to have that scene take place at an inn away from the castle (where Sun and Peng Lan would be staying while visiting the prefecture and Zemin has setup not-quite-permeant residence). If only we could find a way to have Shu barge in to explain what happened to Bao’s father, we could get most of the PCs involved in a scene together.

Then again, Bao and Shu in the castle while the rest are out of the castle probably would work just as well for opening scenes.