We stole some work orders. Also a stuffed fish. 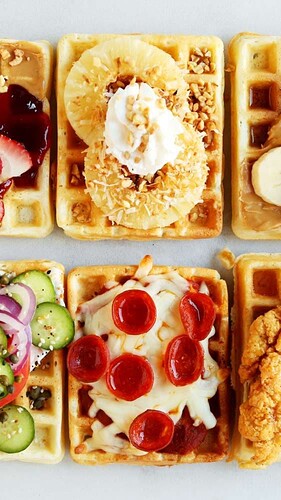 We’re having a good time.
Birds across the common room … they all seem … unhappy and highly stressed.

Alvin walks over with some waffles. One of the birds, in a fine robe of Eyrie dynasties. Take the food and ask for more coffee. 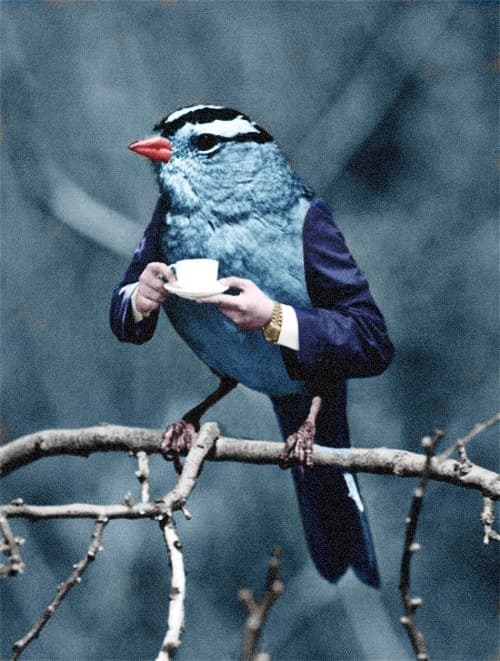 Read a Tense Sitch ==> 6!
Their eyes follow. And then they look at the group. And then … TOMO!!! Shook, gather up, bee-line for upstairs.

Cid going to talk with the miners. Tomo has an interest in screwing up anything their nemesis, Ayase, is doing. Goes along. As does Alvin, and Allie.

Slayer is going to chat with Dillon about any help that can be quid-pro-quoed.
Dillon and crew are cleaning tables. Anything needed?
Nah. Company takes care of that, or hire local workers.
Door flies open – and a frog walks in. Tomo? No, different voice.
“Where are the birds?!”
Goes up the stairs.
Ugh. The birds cause so many problems. Esp. the frog.
Figure Someone Out ==> 7.
How do I get Dillon to dish the dirt?

Rest of group, Cid is looking for a mouse, someone else talking to Miriel …
Lunch-break. Pump for info, and offer to help.
Persuade ==> 6 (Alvin is charmy helpy wanna help) ==> 7 (Miriel, okay, you are helpful)
Wait for us up on that ridge.

Slayer … hmmmm. Ayase. She’s wanted in the Toadlands.
Dillon - WHATTTTT?
She killed her lord.
Oooooh.
So … locked treasure in the governor’s basement?
So what’s up with the birds?
Governor has a way of attracting traitors, it seems.
A PLOT: Lady Nikolai – those birds are siding with the cats instead of the Eyrie. To take over Blackpaw’s Dam. The Governor is interrogating the Lady. Orders being prepped to move troops from Oakenhold.

Tomo/Alvin
Alvin is interested in blackmailing the fish owner.

Tomo considering approaching the Governor to tell him about Ayase being a betrayer. 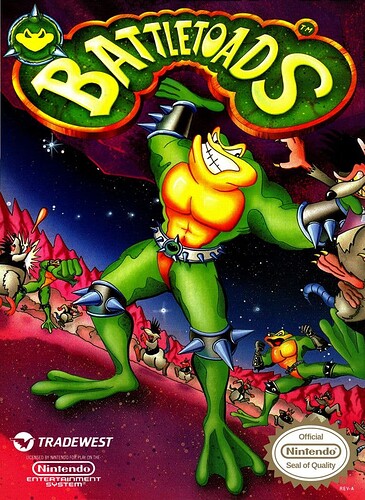 Walk by work order place on the street, there is a flurry of kicked-ant-hill activity. Crime scene.
Alvin can’t get in, so he will wait.

Tomo with Alvin goes to the gate of the Governor’s manse. Want to see him. Asking for a favor?
Roll rep with Marquisate ==> 4! (Notoriety)
Spear time!

Flee through alleyways. Crates.
Alvin Acrobatics ==> 13! Full Hit!
Hide up in trees.
So … yeah, the know about Tomo. And that he’s in town.

Everyone
Off to lunch with Merial!

A different mouse … we’re over this way.
Over toward the forest line … worker and Merial come out.
Cid: We are here to talk about … how to make steel.
Helping them improve their steel tech.
In exchange for the Governor, his mansion, etc.
Cid doesn’t try to persuade with words, but with notes.
Help -
Slayer wants from Governor’s mansion: sabotaging plot with the Eyrie, and maybe do away with the governor within the Marquisate, and also fireworks and explosions.
Tomo wants from the Governor’s mansion: solidly against the Marquisate for harboring the traitor Ayase.
Alvin wants shiny stuff. Which was probably stolen from the People. I’m gonna steal it back and get that money back into circulation.

They want us to steal the Letter of the Marquis, his legal authority. They want it. Letter and sigil.

They can put up Allie to keep her safe.
She gets this is like her parents trying to get power to the people.

Slayer - taking Allie out on a boat with tix from Dillon. With Slayer and Cid.
Paddleboat … looking at the Governor’s mansion.
Cid - Read a Tense Situation ==> 6. Luck’s on fire!

Slayer works to keep the boat stable.
Best way out/in/thru – crumbling wall, break thru or be part of a work crew.

(Shares info with Tomo … both have +1 Forward)

Slayer confirmed with Dillon that there’s a vault in the basement.
Governor’s Letter of Marquis and Sigil.
And Ayase is hanging around.

Cid considers how forgery can work to get in.
Cid suggests Alvin leave the fish in Ayase’s room

They want us to steal the Letter of the Marquis, his legal authority. They want it. Letter and sigil.

Is there any value in forging a replacement letter and sigil, to fool the Governor into thinking we didn’t take it - but legally invalidating any orders they issue?

In Cid’s experience, it kind of doesn’t matter, because “hired guys with swords” tend to trump letters and laws, but if the ironworks folks think it’ll help, he’s all for it.

Either forging evidence, or getting into a safe/locked room/etc. to reveal real evidence, are things Cid could help Tomo accomplish.

I’m all for answering any minor questions here that the mice could reasonable answer for you guys, in the pursuit of making sure things start off as close to the start of the action as possible next time.

There’s always 8 to 10 guards patrolling the outside of the house, with a couple taking a break and resting inside in the servants’ quarters.
Slayer and Tomo think there are probably a couple more than this onsite because of what they saw with the bird delegation. They won’t be on patrol, but keeping an eye on the birds.

Work orders on the mansion are always fulfilled during the day. The worker mice have never been let into the mansion after dark.

A few of the guards will have trumpets to call for help. At the top of the mansion is a bell that will call for help from the local garrison.

The loot is in the basement vault. It is a large room with a big locked, reinforced door. Inside will be tax money, money collected from other clearings and factions to pay for iron, and other prizes the governor has collected. The stairs leading to it is locked and next to the guards’ room in the servant’s quarter.

Ayase has a room near the servants quarters on ground level, but they generally either on-hand with the governor to take their orders, or out and about to fulfill their orders. If any trouble starts, Ayase will be ordered to check out things and deal with them, unless the governor is directly threatened in which case they will likely be ordered to play bodyguard.

There are a few rooms upstairs that the worker mice were never allowed to enter. They do know that there is a meeting room upstairs where the governor takes guests (the mice installed a grandiose table with iron sides and designs built into it) with an attached room that could be governor’s office, but that’s just a guess.

Here’s a crude map they can draw you. 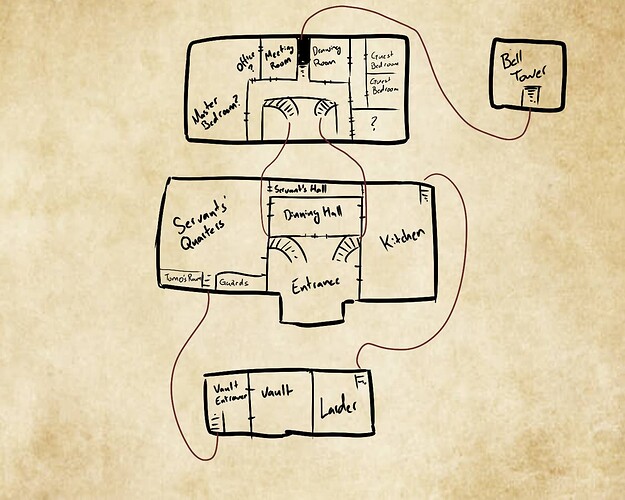 Also, some new icons have made their way into the Roll20. I’m always planning on using that wide icon for groups, so it might be different things in different places. If it becomes too hard to follow, I’ll start changing the background to show affiliation like I do with the other icons (a detail I’m not sure if anyone’s noticed yet).

I had not, but now that it’s been pointed out – brilliantly useful.