We acquired a lot of stuff from the governor’s mansion. And set bits of it on fire. 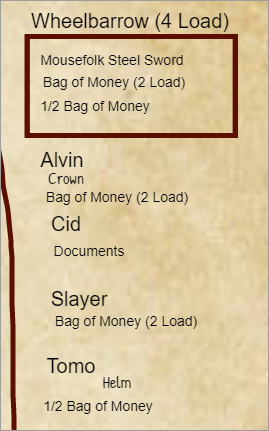 And off we ran into the woods.

Would need to ford the river. We’ll come back to it. 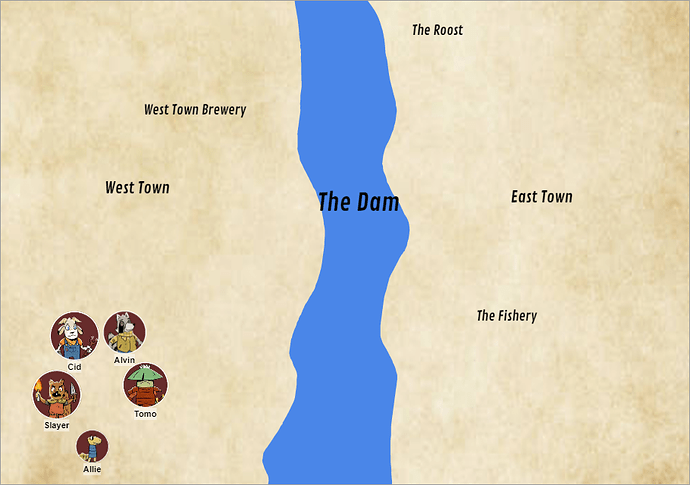 Blackpaw’s Dam, dominated by the dam, a massive tree across the river.
Small lake extending from it.
Come in along the east side of town.

We have war plans for the Marquisate attacking the Eyrie … but with the help of Eyrie factions.

Eyrie Roost overseeing the town. Built into the damn. Control travel from E-W.

Corvid contacts at the Brewery.

Alvin looking for a place with a Breakfast Buffet.
Also … maybe shopping?

Brewery is very active.
Cid and Allie decide they will just drink sarsaparilla.
Other travelers. Major hub in the woodlands. Place is quite packed.

When You Pick Up Rumors While Time Passes

Alvin - what’s up with the Eyrie? ==> 10!! Fishery set up. Gov. Cornelius … project dragged on, but saved face by getting it done. Lady Nikolai makes her home here – the noble working in cahoots with the Cats.
Lady N replaced her most trusted advisor? Well maybe normal petty infighting with Gov. Cornelius.

Cid - trying to find out about Woodland Alliance (terrorists / freedom fighters). ==> 9. There were a few here, but the Eyrie may have stamped out. Flathome would be closest place.
Group - anyone else who might benefit? Maybe Corvids?

Tomo - Did Ayase come up here? Marquisate ==> 2!! Sure, toads at Underleaf at the River trading post. Others, toads at Flathome. Some at the uprising at Allaberra.
But not doing song and dance.

Slayer - At Hardlow’s Warehouse – leave a note on the coaster.

Cid – looking for things to be repaired. Jim and his gutters.

(4 Value each. Also, Alvin has a nice little crown.)

Slayer – Hardlow recognizes. Blew up tree in Pinehorn. Can definitely help Slayer out with explosives. Anything new in town? Brother needs some stuff done –
(1) Jam up bridge controls for a week or two. Keep it from going up. Need it soon.
(No date on when the attack is due on the settlement. Just “soon.” So might be benefiting them.)
(2) Second favor – need to break the dam.

Down south: Mill Town. Just finished a grainery. Would be handy if the Eyrie’s town got flooded. That can happen later in the season.
More info? Ask a favor –

– reasonable, given Slayer’s rep ==> 9. Will tell, but take some Notoriety.
Some secrets: The governor (Cornelius) is not well liked by the high and mighty here. Three noble families (Lady Nikolai, Lord Silus, Lady Aurelia) from Roostin. He’s not one of them. Families are going to pretend to feud, but to drag down the governor. Only ally he has is the sheriff – the tax man. Families think, if Eyrie takes down the governor, one of them (or some outside noble) will take the job.
Corvid explosives wear taken off. Adding more.

Meet up with the rest of the crew.

Slayer will share his info somewhere away from the bar.
Kind of a mob boss guy. Two jobs, both a little sketchy.
Info about local politics.
Nobody wants the locals (or denizens in other towns) hurt.

Biggest Eyrie strength is the force with the Roost and control of the dam.
It would be difficult to take down the Roost but not the dam.
So … flood the Roost?
Or … offer up the plan to Slayer’s mob contact, but want some coin to get info on the timing.
Find some aquatic folk … who might want to take advantage of such opportunity.

Hardlow is cool with hearing about this – but wants his girlfriend released from the Roost first. Maybe get some coin.
Sets up a dead drop.

Tomo has earned an Advance (when we get there) for traveling to a new clearing. 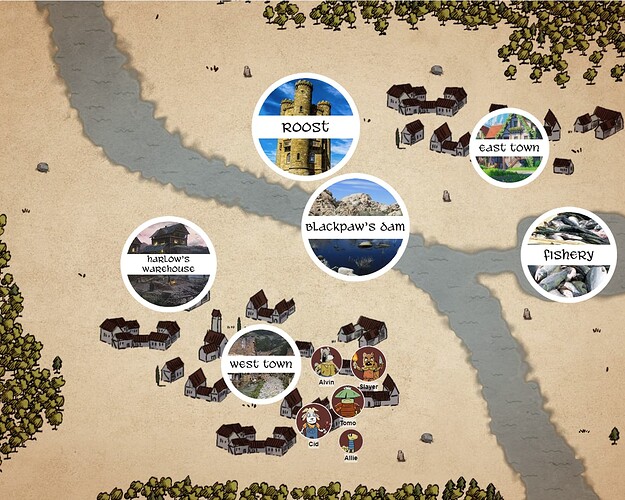 Took a little bit, but here is the map of the Roost. 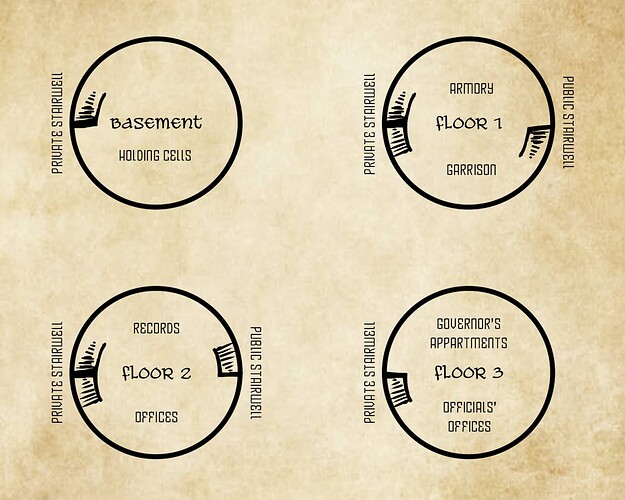 Built into Blackpaw’s Dam, the Roost is a four level tower that is a combination military outpost and government office.

In the basement you have the gaol with holding cells for any malcontents.

At ground level, you have small garrison along with the town armory. Also on this floor is the public entrance where anyone visiting the officials upstairs will first have to walk past the military might of the Eyrie Dynasties.

On the second floor, you have the public offices of government where forms are filled out, petitions are submitted, and judges hear out cases. Also on this floor are a storehouse of official records.

Finally on the top floor are the private offices of the government officials, as well as the governor’s private apartments.

There are two sets of stairs between levels (as well as many entrances and exits allowing the birds of the Eyrie to use their natural flight to move between levels), a public one which connects the first and second floors for anyone of the public needing to visit the offices on the second floor, and a set of private stairs kept away from the public facing areas used by members of the government.

The options I can think of to get prisoners out include:

If we need a distraction, I would suggest mounting a fake assault on the dam controls. If the local mob has been thinking about doing this, I have to imagine the authorities have gotten wind of their intentions. If so, they would probably find it believable if we made a feint in that direction.

Things to Do While in The Roost:

Alvin may want to visit the offices on Floor 2, as tax money collected by the Sherriff and his men will be stored here until it is recorded by the office workers.

Cid may want to visit the Records and Archives on Floor 2 as, due to the redundant nature of the Eyrie bureaucracy, records of prisoners and what has happened to them from other clearings may be available but not open to the public.

Slayer may way to visit the Armory on Floor 1, as it represents a major Eyrie military resource and if something were to get damaged, it would be a large setback for their forces.

And Tomo may also want to visit the Records on Floor 2 to see if the Eyrie has any information about a certain toad aligned with the Marquisate and what they are up-to, known associates, etc.

What do we think are the odds of getting folks out of the Roost via the dam-control diversion idea? If it’s good, then what we can try is:

Just another damn diversion. Got it.

If opportunity presents, might be cool to raid the armory (I mean, why not?) for ourselves and/or prisoners being freed.