Visited the Goshawks.
Hid in the trash pits.
Broke into the Roost.
Kidnapped a raccoon watcher.

There are Shacks … but … they are a Labor Camp.

Notice:
Slayer - The smell. Basic sanitation would be easy, but wasn’t chosen on purpose.
Cid - A good supply of water … with a cage around it. In the open.
Alvin - Kids. Families with kids. Kids working.
Tomo - Built for birds. Infrastructure, towers, etc., built for folk with wings. Birds. Are. In. Charge. 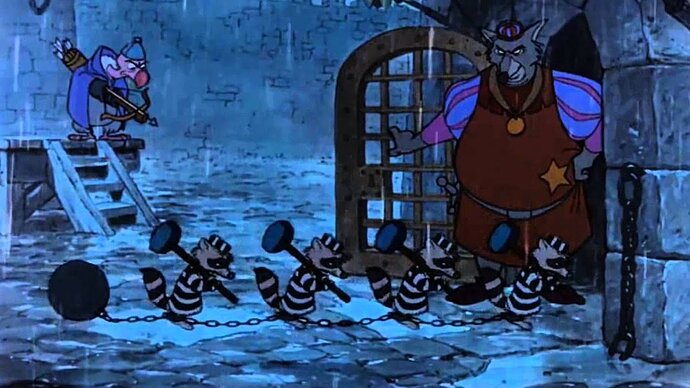 1200×675 139 KB
Looking for …
Cid – ratio of guards to prisoners. What are the prisoners doing … what do the Eyrie get from it.
Slayer – oversight structure.

Clearing forest. Chopping trees. Open ground around the Shacks.
100 prisoners … 24ish guards.
An overall kommandant and then a guard captain.
About an hour from the main clearing.
A single central tree for the (verboten) Eyrie infrastructure – kommandant’s office, guard (all birds) barracks.
Some blind spots. Looking down, not up. Nothing considered underground.

Set traps in the forest.
Attract toward traps and snakes.
Get a key. Free prisoners.

Figure out how to have the tree destroyed safely.
Hide prisoners.
Get them off toward Allaburrow (non-Eyrie controlled).

(Alvin - Allaburrow … his home, vagabond because being hunted by a powerful official, leaving behind his family.)

Cid …
Clear 2 depletion spending a day in the forest. Slayer … laying traps. Creating to Destroy. ==> 5!!
Need some additional stuff from the supply shack.
Finesse ==> 9.
Dig a burrow underneath.

Hole has damaged the fence.
Get everything needed … More Dangerous Than Intended. It will start a fire.

Tomo …
Tracking down snakes. ==> 8.
Gets back late and covered in filth.

Implicate the Marquisate? Leave some evidence that some of the guards are being paid by the Marquisate.
Cid - Cunning ==> 10!
Making Tomo (as Ayase) meeting with Caston the Raccoon Watcher.
Trick and NPC ==> 13 FULL HIT!!! And so we get ready to dive into the actual mission …

For next time, the only things we didn’t mechanically account for:

Stuff we’ve got going for us:

Things I thought of too late: