The graveyards are full of indispensable men.
– Charles De Gaulle*

Couldn’t distract the big skate with the baby.
Dropping a meteor on it.
Evacuating folk to Shackleton, then to Navarin.

Navarin actually has a landing pad. Almost like normal!
Guards.
Need to talk with Carter.
Down the elevator to the control area. Nails is bringing Elijah along.

(Nan is still at Shackleton, working with Leslie)

Cortex, Nails, and Bleys to meet with Carter. He’s deep in planning. Discussing the three settlements.
Talk about the skate.

Cortex: We’re helping, but we don’t know everything about this world, so we need to work with you and your frozen people.
Power distribution, medical techs, and people who might have space experience who know of the gates.
People with vault technology.

Earl - not so much issues in getting in, the other is actually finding any data. ALGO?
Gather Information => Strong Hit! Finds the access port. Now to cable … and … wow. There’s … lots of data … all entered in sequential order.

Carter shows Bleys the sick bay. Medical tech? No, really primitive.
Healing pod, like Nan told us?
5th Overseer, led to his death. But no mention of tech. Don’t have it. Just directives to leave the Mariposans alone.
(Carter is 7th Overseer.)

And Carter is worried about this, very worried.

Cortex – looking for security information in the Vault – with Lincoln’s assist – as to what might have been taken from there.
Gather Info ==> Weak Hit
Lincoln is very happy about being reconnected, and is happy to look through the systems. Based on the time criteria … some access, not to a med vault, but to a research station, category 7Y47n. Under research by scientists prior to Gate closure.
There was a healing pod, under research. Created an effect of retarding aging … until people died.
Bed sort of object, enclosing the person. Nanites. 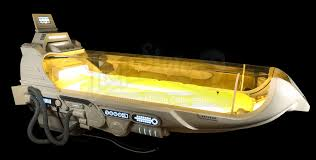 Surveillance sweep looking for this object through data banks.
But … no, data for that period is not there.
Is it there now?

Securing an advantage for Nails and Earl ==> Weak Hit
2 Mo to Earl.

Eventually find a major power trunk/run. Main power for the system? No, it never branches off.
And eventually come to a wall. There’s about 5% of the facility that is unaccounted for. In a corner.
Cortex: no sensors or cameras in there.
Bleys: Carter is all, no access to anything there, it’s not just a wall? If there’s something there, I woiuld know.
Nails uses stud finder to find a place where she can sue Earl’s fusion torch to cut through.
Bleys (and Carter) come in.

Darkness inside, with a smattering of lights.

Nails walks in … seems like office space … maybe this was the Overseers office. Room for staff. Rather than operations center where Carter works.

One floor panel is open, trunk of power cables coming out.
Carter is not going in, because he’ll be blind.
Whip up something to let him use our comlinks.
Follow the power cable.

Cortex approaches the pod … and hears a staticky whine from the walls. Speakers. Synthesized voice, “You shouldn’t be in here. It’s cleared off for good reasons. This equipment must be left alone. Important work. Continuation of humanity. Damage done to my physical form, I had to maintain the information I’d gathered in my time.”

Paxton.
Paxton’s dead.
He did die. But the knowledge had to be retained. This is is a stopgap. Part of memory was offloaded to data cubes.

Cortex: Just need to read data, not mess with your thing.
Paxton: The process hasn’t been finished yet. The transfer.
(15-20 years)
Cortex: Just going to check your systems. We’re from Astrid, trying to get the gates working.
Paxton: No. You’re more like Mariposans.
Cortex: We have advanced tools, see?
Convince – Nails tries to assist ==> MISS
Reaching for things in pockets, oh, um, a pair of security guns drop from the ceiling, let’s freeze.
Cortex: You can trust us because you have us outgunned.
Supply - Convince ==> Strong Hit!
P tries to rationalize, but eventually is swayed. So, yeah, access data stores, but I’m prepared.

*This the most common attribution and framing of the quote. However, De Gaulle never actually said this. The origin appears to be a slightly less poetic quotation by Elbert Hubbard, “The graveyards are full of people the world could not do without.”