I didn’t want to bury the lede over in the Zipper Merge thread, but it ties in with that in some important ways, so I want to get all the cards on the table. Esp. since it’s become an open secret in certain quarters (i.e., this household and with the GM, and, for all I know, is just as gobsmacking a surprise as Pidge coming out for everyone else). 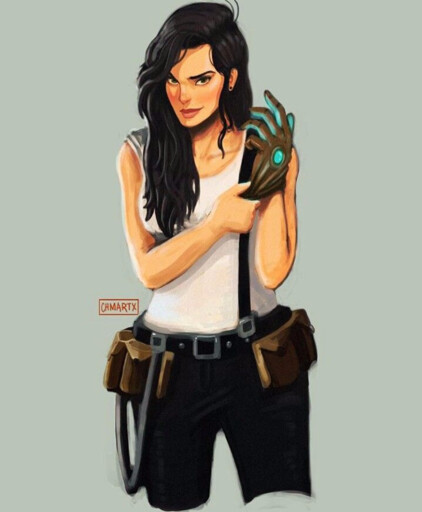 422×512 34.7 KB
My intent, post-Doom-resolution (however that turns out) is to shift over to playing the Reformed playbook … with Alycia Chin.

I have a number of reasons to do this (which I’ll probably talk at tedious length about downthread), but while I had a fantasy of a glorious reveal, I raise it now for three reasons

This is something I’ve actually been bouncing around with Doyce for several weeks*, originally from an off-hand comment he made (so blame him). If anyone has major objections, though, please let me know as soon as possible so we can try to address them.

* Actually found my first email on the topic to him, back on 1/1. Yeah, I know how to spend my New Year’s Day, amirite?

I am, as you know, down with this. I think it opens the door for some interesting stuff with a lot of the characters. Jason will still be a key character, obviously, and with Alycia in play, it will bring a second and different relationship to AEGIS for the team, which is also fun. (I think Alycia will get a different handler as well, just to mix things up.)

So thoughts on “why,” just to share (some of) them out loud:

It’s not without regrets, of course. Playing Jason has been fun (esp. with all the other characters to bounce off of). And I feel like I’m leaving Summer in a little bit of a lurch in her subplot, though I think there are possibilities there, too (and it’s not like Jason, if all goes well, is going to vanish off the face of the Earth [now watch Jason vanish off the face of the Earth.]).

I think this will be a good time.

Summer wanted to be a supportive friend to Jason. If he is cured of what ails him and is off finding himself in a positive manner, she will consider that mission accomplished, and focus her time on new things. She will always be around if he needs, naturally.

… and might make a really nice foil/frienemy/something for Alycia, from all the way back to the Travelycia/Numina word-association thing, thought he Sepiaverse scene, and something new.

I mean… she gets to work the whole Alycia/Jason thing from another awkward angle.

The main challenge being to make sure they pass the Bechdel test regularly as well.

The main challenge being to make sure they pass the Bechdel test regularly as well.

I’m ready for this.

One of Summer’s openers on initially talking to Jason was “you can talk about Alycia no more than three times” because god damn the boy had it bad, and it’s often useful to force someone into other mental channels for awhile. Talking to Alycia might get her a similar Jason quota, and it might be zero.

So what else do they have to talk about?

That’s just what I can think of now, without having some early interactions to spark further ideas. So I’m not at all concerned about them being independent of both Jason and Leo.

Whatever Alycia’s feelings toward Jason, don’t expect her to be mooning about (Jason-like), waiting for his call, thinking about his dreamy eyes, etc. I don’t expect there to be a Bechdel test problem from her.

From Summer is another problem.

The above bullets are all good, Bill. But don’t expect Alycia to throw a pajama party with her bestie on Day 1. She’s not going to come out of her shell that fast (and her shell is prickly).

The above bullets are all good, Bill. But don’t expect Alycia to throw a pajama party with her bestie on Day 1. She’s not going to come out of her shell that fast (and her shell is prickly).

Summer’s in this for the long haul - it took Leo & Pneuma weeks to stabilize their friendship post-breakup, and they were on good terms, so she’s prepared. And I saw you called out team friction as a goal for the Reformed. Leo won’t be having any of that nonsense, so he’ll need to be worked on too.

And I saw you called out team friction as a goal for the Reformed.

Not specifically. It’s not a goal for the playbook – or even (except in self-defense) for the character – but I see this particular character adding friction to what has seemed a pretty well-oiled machine by her very nature. Which Space Dad will try to put a stop to, no doubt.

Space Dad poses its own challenges. Leo’s pretty safe (emotionally and otherwise) against the usual sorts of tricks Daddy’s Little Villain could bring to bear, so if Alycia needs to get a handle on him, all I think she really has is his own troubled past and darker impulses. But he’s also going to need to find a handle on her, without going through Jason if possible, and that could prove similarly difficult. So I imagine it’s going to be a race to see who gets Influence first.

As a player, my other major hope is that forum side-stories and shenanigans continue in some form, whichever characters might be involved.

I fully expect Jason to remain an active NPC in team Shenanigans wherever they happen to happen, unless he’s living like a mole person in the steam tunnels underneath Gardner Academy when this is all said and done.

As far as any tension Alicia might introduce to the team, I’m sure some of that will come from personal history and personal temperament, but I honestly think much of it will come from people representing her previous life and others who might want her head on a platter for various reasons. The team might take some heat for example for harboring a known terrorist, even if it’s all under the Aegis of Aegis so to speak. And for that matter aegis is probably going to end up providing some of that team pressure.

I like the idea of Alicia’s past and various entanglements exposing the team to different aspects of the city in the world, not least because it ties in really nicely with the team becoming more involved in other aspects of the world in terms of international politics and just larger power structures. It won’t sell it be because of her, but it will follow the same kind of theme that I think the team in general will be exposed to.

It’s all pretty exciting cuz I really feel as though the team is moving into a new chapter with a different or at least wider frame of reference?

As a player, my other major hope is that forum side-stories and shenanigans continue in some form, whichever characters might be involved.

I fully intend them to happen.

I’ll have to figure out some different vectors – though an encounter between Alycia and Travelycia must happen at an early date. Oh, and with AI Byron, too. I’ll sell tickets.

(I’m slightly hampered at the moment with Jason side stories based on 27, given that some fundamental issues won’t resolve until Charlotte and Jason’s post-26 stuff is resolved. I’ll see what I can do. I’m holding off on writing anything (public) for Alycia for the nonce.)

Oh, my. Please be sure and use that epithet at some point. Please.

It’s certainly the trope name (http://tvtropes.org/pmwiki/pmwiki.php/Main/DaddysL…) but Leo knows he’d be skating on thin ice by bringing up bad guy parents. If things get heated, something like it might slip out. That said…

a bit of stress and prickliness in the interpersonal relationships might shake things up a little (in, I hope, a good way).

This statement is what I meant by “team friction as a goal of the Reformed”, and I’m all for it. What does that look like for Leo?

Both the player and the character are still working out those internal rules. She has some (which was itself a character development over time), but they’re probably not what you want to parade in front of TV reporters at WCYN just yet.

I actually suspect it will be less the landmark rules (“Killing: when is it okay?”) and more the casual habits. Alycia’s sensitivity to violence and inflicting pain and emotional manipulation and such has been dulled during her life (by design) – or, depending on your philosophy of human nature, intentionally stunted and left immature.

The parallels, analogs, and differences between her life and Leo’s will almost certainly be a bundle of issues that I look forward to tackling.