Starforged on a Camtono of Iron

In the vein of Bill’s The Veil on $20 a Day thread, I figured I would give my own rundown of Starforged. Starforged uses Ironsworn as a basis, but makes several improvements on that system based on observations of the creator and the player base, as well as other changes to gameplay and core assumptions to fit the space travel theme of the game. If you haven’t read Ironsworn before, go give it a look. It’s free.

At this point, I’m sure folks have questions because I’m horrible at explaining things. Ask away.

So this sounds very cool and very systematic and very thought out and very processed and hits all the right SF buttons for me.

My question / concern is the game play, because it sounds… too much of all those sounds, reminding me a bit of some of the things about S&V that I found irksome. So… how does it play?

At this point, I’m sure folks have questions

I have a combination of questions and previous experiences with Ironsworn. Mostly the questions here are “is this still how it is?” 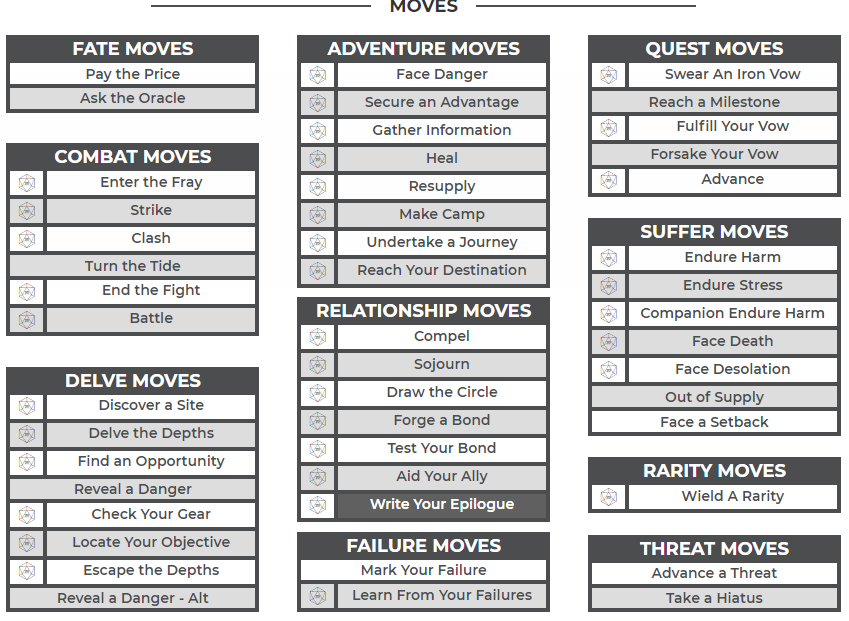 So… how does it play?

While I can only speak from my own experiences, I think it plays quite well. There is a core gameplay loop, but it being “swear vow > work at vow > pick up other vows (optional) > work more at vows > complete some vows > repeat” might feel better than S&V’s “downtime > mission > downtime ^ nebulous freeplay that encompasses everything” loop. For more details with it in play, I recommend taking a look at Doyce’s and my solo games. Certainly won’t be a 1:1 comparison between solo play and a traditional GM play, but it should at least give you some ideas.

I 100% agree with this, though I have found that playing this has lead to my GM prep in all games since then being less “prepare encounters and scenarios” and more "write down questions about the PCs that interest me (for instance, using our Masks game as an example “what is Joey willing to give up to return to be a normal kid”) and then using the rolls to insert those questions into the game where they make sense (“Joey rolled a miss and must face a startling revelation? Sounds like a cool place to insert my question in some form!”).

Do the revised moves still work that way, e.g. “complete a journey” can just tell you “you fail, so the princess is in another castle”?

Let’s break out a couple of these moves and figure that out (these are going to look very familiar to anyone who knows Ironsworn, but I’m doing this more for folks like Dave who don’t know Ironsworn as well). When undertaking that journey, Starforged uses either the move Set a Course (if we’re undertaking a known route, which we will setup a couple during the beginning of the game and make more as we progress) or Undertake an Expedition (if we’re out making our own way)…

SET A COURSE
When you follow a known route through perilous space or across hazardous terrain, roll +supply.
On a strong hit, you reach your destination and the situation there favors you. Take +1 momentum.
On a weak hit, you arrive, but face a cost or complication. Choose one:

On a miss, you are waylaid by a threat along the way, and must Pay the Price. If you survive, you may push on safely to your destination.

UNDERTAKE AN EXPEDITION
When you trailblaze a route through perilous space, journey over unexplored terrain, or survey a mysterious site, give the expedition a name and rank.
Then, for each segment of the expedition, envision your approach. If you…

On a miss, you are waylaid by a crisis, or arrive at a waypoint to confront a dire threat. Do not mark progress, and Pay the Price.

If we’re Undertaking an Expedition, we’re doing the whole Progress Track to see how far we are on our journey. Once we decide to see if we’ve made it to our destination (could be we’re only at 4/10 progress marked or 8/10), we use the Finish the Expedition move:

FINISH AN EXPEDITION
Progress Move
When your expedition comes to an end, roll the challenge dice and compare to your progress. Momentum is ignored on this roll.
On a strong hit, you reach your destination or complete your survey. Mark a reward on your discoveries legacy track per expedition’s rank: troublesome=1 tick; dangerous=2 ticks; formidable=1 box; extreme=2 boxes; epic=3 boxes.
On a weak hit, as above, but you face an unforeseen complication at the end of your expedition. Make the legacy reward one rank lower, and envision what you find (Ask the Oracle if unsure).
On a miss, your destination is lost to you, or you come to understand the true nature or cost of the expedition. If you recommit to the expedition, clear all but one progress box, and raise the rank by one (if not already epic).

So looking at the Finish the Expedition move, I can see that being interpreted as "you fail, so the princess is in another castle” but it could mean a lot more. Could be that you’ve reached a point in space where your jump drive would be dangerous so you have make the final leg at subluminal speeds (meaning you’re recommitting to the expedition). Could also mean that you reach your destination and it is surrounded by an orbital blockade (meaning you’ve come to understand the true nature or cost of the expedition) and so you have arrived but cannot reach your destination until you figure out what to do about the blockade (which doesn’t necessarily mean more Exploration). All are questions of context and what’s most interesting at the time.

Here’s a screenshot of the stock moves, from Roll20

The moves are slightly different in places (no Turn the Tide combat move anymore, none of the delve, rarity, failure, or threat moves have explicitly been ported over, but a lot of folks are using them regardless in the playtest because they add a lot to the game). That being said, there are a lot of moves (8 pages with an index in the playtest packet). Luckily, much like PbtA, this is certainly a game where if you forget a move exists in the moment, the game fails gracefully (meaning you could probably play like 80% of the game off of just Face Danger and still have fun).

What support is there for online play, or would we be doing this manually?

There is a custom Starforged character sheet that’s been added to Roll20. I don’t think it’s been made public yet, but I have access to it.

Do you recommend doing this GM-less, or do you think it’d be better GMed

With this many players, no I would not recommend doing this GM-less. Having a GM to facilitate gameplay, replace the envision and Ask the Oracle, and keep track of all the moves is probably the best here. That being said, I don’t think I’ve explicitly said I wouldn’t mind running this for a while to see what folks think (though I think I implied it), but I will now.

Certainly won’t be a 1:1 comparison between solo play and a traditional GM play, but it should at least give you some ideas.

My impression continues to be “There’s a table and roll for everything, and you will be doing a lot of that,” all the way down to name selections That may be because of the solo gameplay in the posts, though (along with a desire to work the game system as a test, vs more natural accomodation if running in a group for fun).

That being said, I don’t think I’ve explicitly said I wouldn’t mind running this for a while to see what folks think (though I think I implied it), but I will now.

I’ll touch base with Margie to confirm.

My impression continues to be “There’s a table and roll for everything, and you will be doing a lot of that,” all the way down to name selections

I will totally admit that for my solo run, I rolled for everything I love random tables and how they can spark some inspiration in a void. With a group of players, there would probably be less of that (though a non-zero amount), seeing as how you now have other people’s thoughts, ideas, and jokes to spark inspiration.

It also doesn’t help my random table addiction that people made cool tools like 0RACLE. 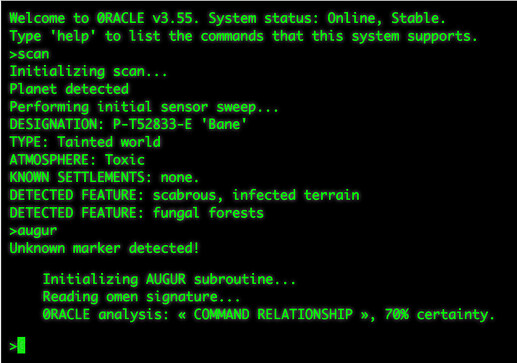 Luckily, much like PbtA, this is certainly a game where if you forget a move exists in the moment, the game fails gracefully

I think my big fear here isn’t that we’ll forget the moves, but that we’ll get sucked into over-analyzing them, e.g. “I could just roll this but I have an asset that will give me a bonus but only if I spend supply, which is shared so I wanted to ask everyone if that’s okay, and on the other hand we might want to save it for later…”

Not going to disagree because analysis paralysis is a thing, but I feel like it both is going to be an issue no matter what game we play (if it’s not “which move to be rolled” it’s going to be “what action do I take” and that’s the same thing really).