Some background info for Doyce to run NPCs, if/when it comes up. Some of these are just trope names.

These are awesome. And the Link / Jason rivalry makes an amazing amount of twisted sense.

Agent Waters reminds me of the cop in the (wonderful) animated film “My Life as a Zuchinni.”

The short question has a long answer.

Leo doesn’t know. If AEGIS knows, they aren’t telling him. Rossum has never mentioned her or identified her, other than vague references like “yeah those were the days” while he had Leo in his custody. There’s several possible reasons for all this.

She would have been a person who attracted the senior Snow’s attention. If he just wanted a pretty face to look at, he could surround himself with beautiful, subservient android girls.
If she’s around, she’s also got her own reasons to not be in touch with Leo. Maybe she doesn’t know where he is any more than Rossum does, courtesy of AEGIS’ witness-protection program. Maybe she’s already keeping an eye on the boy, and will appear at some important moment. Maybe she’s a villain after all, and Link will encounter her.
From a story perspective, one of her uses is to shift Link in some new narrative direction. Her story will affect his, and we haven’t seen how that’ll play out yet. She shouldn’t just be a Lost Lenore or a woman in the fridge, but a person who hasn’t been in his life for whatever reason.
I’ve played Link once before, and in that story, his mother was a lab researcher who was trapped as a digital life-form by a corrupt corporation. He cooperated with his dad to use his robotics and AI tech to bring her back to life as an android. Maybe that’s what happens here - but maybe things go very differently. “Play to find out”, I guess.

Unsurprisingly, I have some ideas. Thanks!

The other NPC I didn’t write up is the Inspector Javert type: somebody (with AEGIS, local law enforcement, whatever) who will show up and hassle Link for basically being suspicious. This person would show up, shake the team down, sow seeds of distrust, and in general be a pain in the ass for any young team of would-be heroes. I don’t know where you’d plug in such a character so I left them open.

Semi-unrelated question, but what’s the design aesthetic on Link’s armor?

(It is damned hard to dig up power armor that doesn’t look like Ironman or Halo, especially if you’re going for something that’s less “flying sniper” and more “in your face brawler.”)

My thought on the armor is that the baseline suit puts him at, like… Captain America in terms of ability and what he can typically affect in a scene. Or, if you like, Superboy or something.

Adding Pneuma (breath) adds more range and mobility (flight and some blasting?) at the cost of literally wearing your heart on your sleeve(s).

All three together is the (scary) full package.

(I’m trying to keep in mind the game author’s note that the Bull concept works better with a simpler, less versatile set up powers - the kind of thing that pushes them into “when all you have is a hammer” situations. BUUUUT I also love the idea of Pneuma and Otto adding to the suit, which (I think) is balanced story-wise by bringing in more options and versatility at the cost of directly and literally putting his friends in harm’s way.)

Below, some random images I dug up. 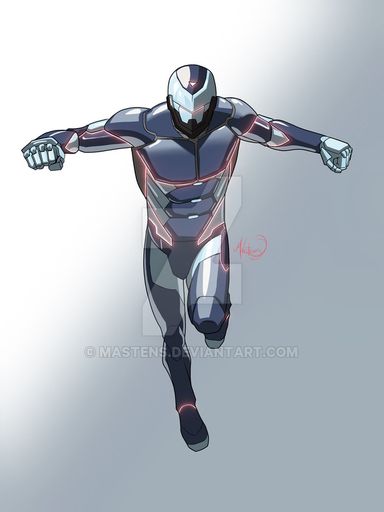 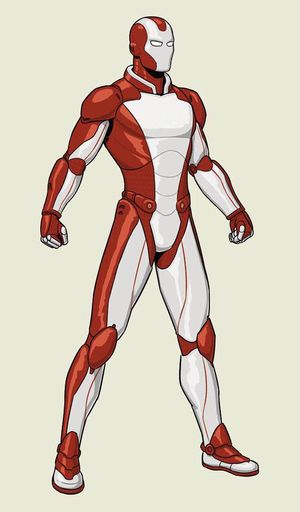 Or maybe the suit is more pieces of armor (gauntlets/helmet, boots, belt) that become more a ‘full suit’ as Pneuma and Otto join in? I dunno.

(I’m trying to keep in mind the game author’s note that the Bull concept works better with a simpler, less versatile set up powers - the kind of thing that pushes them into “when all you have is a hammer” situations. BUUUUT I also love the idea of Pneuma and Otto adding to the suit, which (I think) is balanced story-wise by bringing in more options and versatility at the cost of directly and literally putting his friends in harm’s way.)

A little behind the scenes stuff then!

I build a lot of my characters by taking a few key concepts and pouring them into a blender. One of Link’s key ingredients was Astro Boy: a robot kid built by an evil scientist, but really fathered by a good one, who goes and does good things. The 2003 Astro Boy series in particular is amazing. That kid doesn’t have machine guns in his butt or whatever. He has basically four powers: a hero’s heart (I’m counting this), super-strength, flight, and his arm beam. He gets SO MUCH done with just that power package.

Link doesn’t have, say, Iron Man’s Swiss Army Knife of weapon packages. He doesn’t have any built-in weapons, in fact. That’s deliberate. The one gimmick the core suit brings is the grappling lines, and I consider those versatile enough for regular use. They pull things to him, or pull him to things, or disarm bad guys, or otherwise let him get directly to the action and stay there. He’s otherwise bulletproof and somewhere in that strength continuum, yeah.

Delegating the powers to his companions means they can be immobilized, unavailable, or otherwise occupied - for example, maybe only Otto can hold up some rubble while civilians are rescued, and Link himself has to go do something else. But it’s also a tool to power him up later on, if/when he builds new robot friends. I wanted flight per se to be rare, so only Otto provides that for the moment, but linking with Pneuma would definitely cover the rest of what you said.

I have a folder with some images at home, I’ll dig those up tonight.