It was 6:59 and Jack was waiting for the last couple of seconds to tick away before calling over to Halcyon North Public Library. Ms. Eisner would already be there but it would be rude to call before the Library official opened. As the second hand ticked over, Jack started manually dialing the number instead of using the contact. A few extra seconds so this wouldn’t appear like they had been waiting to planned. Just a causal conversation.

The phone beeped for a few moments before kicking over to a pre-recorded message about the Library’s hours and location. Ms. Eisner picked up about half way into the street name. “Hello?”

Ms. Eisner let out a patient sigh. “Jack, you can call me Liz. You’re not in elementary school anymore and we might as well work together.”

Jack frowned. “I’m sorry M- Liz. I was actually calling to find out if I could take today off? I had some personal things come up and-“

“You’re fine, dear,” Liz said trying to hold back a chuckle. “You’ve got all summer to put in the fifty hours. You don’t need to put it all in two weeks.” Jack gave a sigh of relief before moving the phone away so Ms. Eisner wouldn’t hear, but Ms. Eisner started talking again so they jerked the phone back.

“If you don’t mind,” Liz asked, her tone turning sarcastic, “what’s so important to put you away from this internship?”

“Alright I won’t pry, dear,” Liz said, trying her best to sound comforting. “I just hope you’re not taking too much on your plate.”

Jack started to say something, but a gentle knock from their bedroom window drew their attention. Liz continued to talk, but Jack wasn’t listening anymore. Outside Jack’s window was Amari, crouching on the fire escape in his Concordance form.

Jack put the phone up to her mouth and, without any inflection, said, “Thanks for being so understanding, Ms. Eisner. I have to go, good bye.” Jack hit the button to hang up and rushed over to the window.

Agent Compassion opened the window and Concord gave them a meek wave. He started to say something, but Compassion cut him off with a raised hand.

“You can’t be here,” they said, a current of fear in their voice. “I’m not supposed to have boys over.”

“Sorry,” Concord said with a bit of embarrassment in his voice, “I didn’t come over to visit but I really need to talk to you.” Adam paused for a moment, seeing the fear raising off Compassion and timidly offered, “Uh, could you meet me somewhere instead?”

“Yes,” Compassion said, their eyes darting back to the door. “Give me ten minutes. I’ll find you.”

Concord was going to say something, but Compassion shoved the window closed and pulled the blinds shut. He waited for a moment, unsure what to do, but grew increasingly awkward over the whole situation. Truth made this look so easy, he thought as he took to the sky.

Adam picked somewhere in the upper atmosphere. He figured it would be private enough, but he could see another couple of supers about twenty miles away also talking. Should be far enough away he hoped, but couldn’t help but wonder what they were talking about. Nicer topics than invading each other’s personal lives, he imagined.

Compassion arrived a few minutes later, now in their Concordance form. The fear Adam had saw in their aura had given away to anger. “Amari, what were you doing showing up at my house?” they shouted.

“Sorry,” Concord replied, though it hadn’t sounded like an apology, “but Truth was the one that gave me the idea.”

Compassion looked confused and then their eyes darted off to the side towards something Concord couldn’t see. While he couldn’t hear Compassion communicating with their Shard, he’d done it enough times to recognize the look. After a long moment, Compassion’s face scrunched up in frustration. “Dammit Liam, what the hell.”

Their gaze finally returned to Concord and they said, “Okay, but that doesn’t give you the right to barge into our real lives.”

Adam was a bit surprised about their choice of words. His father had talked a lot about compartmentalizing—separating the different parts of your life so they don’t affect each other (and how he’d wished Adam could do that with the Concordance)—but it always seemed like such a shameful idea to him, like you didn’t like the things you were doing part of the time. Adam wondered if that’s how Compassion felt about the Concordance.
Concord held up his hands in an apology and hoped Compassion would take it as such. “Sorry, I’ve just got to figure out what’s up with this whole Tribunal thing.

Compassion shook their head. “I’m not going to be able to tell you much.”

Compassion’s eyes flickered to the side. “When you had your Shard, where there topics they didn’t want you to talk about?”

Adam thought back. It’d been a while but he could still remember there were a few times that Sol had held his tongue, but it usually seemed more like he was doing it more for his benefit—Adam, especially before last year, had been prone to nervous rambling and he could only remember Sol controlling his action to keep him from further embarrassment. Slowly, Concord nodded back to Compassion.

“Well Ceti doesn’t want us talking to you about all this before the Tribunal.” Concord shot them a look, but Compassion was already explaining what they meant. “Liam- Truth is Ceti’s chosen… tool,” Compassion said with a smirk at that last part. “He’s the one Ceti wants explaining the situation to you and only during the Tribunal.”

“Why?” Concord asked. This sounded like Ceti, the other agents’ shared Shard, was trying to manipulate Adam but that didn’t sound like the Concordance. Until it suddenly did. “Oh, he’s Truth. He’s only going to tell me the facts, right?”

“Exactly,” Compassion said as they crossed their arms.

“And the ‘facts’ are going to be presented in a manner Ceti’s happy with.”

Compassion shook their head, but only just barely. “That would be deceptive and the Concordance would not do that,” they said, but Concord could see a bit of anger rolling through their aura as they spoke.

Was that really what Compassion thought, Adam wondered, or only what Ceti would let them say?

“Look Amari, just don’t worry about it. Go home and wait for the Tribunal. Or better yet, go hang out with your fr-“ Compassion’s mouth snapped shut and their face pinched in a snarl.

“Wait, what?” Concord asked, but Compassion was already gone in a halo of red light. Truth’s doing, Adam was certain of it.

Compassion was trying to tell him something around what Ceti would let them say. It’d stopped them on “fr-“… “friends?” “Go hang out with your friends?” But which ones? Leo? The Newmans? Keri? Jason?

Well, he needed to talk to Jason anyway about getting a conference room at the Quill Compound. Truth was against going there so it was as good a place to start as any.

Adam looked back over towards where the other pair of supers had been as went to fly down somewhere low enough that he could get cell reception and not so windy that he could be heard. They were gone and Adam hoped things were going better for them than it was for him.

Transcript of Call from A. Amari, 7:42AM

JQ: “No worries, I could use the distraction right now. What’s up?”

AA: “Um, I hate to ask but you know how you said you’d always help however you could if the Menagerie needed it?”

AA: “I kind of need a conference room or something at the Quill Compound for a couple of hours.”

JQ: “That’s… an odd request. Especially from you. No offense.”

AA: “Sorry, it’s just these Concordance guys need someplace to hold a Tribunal and you were the first person I could think of.”

Part two. Hopefully I’m bouncing between people’s various names in a manner where everyone can actually follow who I’m talking about.

I am highly tempted to have Colin explain the fear parasite to Concord just so those two can interact, but either Summer or Alycia would be a better choice to do so (though I doubt anyone would want to bring it up with Alycia this close to what had happened).

Of course, Colin would be around Alycia at this point… hmm.

Hopefully I’m bouncing between people’s various names in a manner where everyone can actually follow who I’m talking about.

I think my source of confusion is how we ended up sharing names between the cosmic principles (e.g. “Truth” as some sort of force) and the agents who exemplify them. From this story, “He started to say something, but Truth cut them off” is an example. We have Jack/Compassion talking to Adam, but is Liam/Truth also in scene, or is Jack being coerced by some internal force?

If you want a non-Concordance person to talk to Adam about the Scarasite, can I suggest Dr. Liljenquist, the child therapist who was possessed by it longest? That might open up another conversation, about helping the Concordance Kids cope with their alien partners (or deal with their own separate problems), if that’s something you feel would be useful. He’d probably have been taken in by the police for questioning, so Adam’s dad could put them in touch.

I think my source of confusion is how we ended up sharing names between the cosmic principles (e.g. “Truth” as some sort of force) and the agents who exemplify them. From this story, “He started to say something, but Truth cut them off” is an example. We have Jack/Compassion talking to Adam, but is Liam/Truth also in scene, or is Jack being coerced by some internal force?

Nope, this is me getting the Agents’ names confused. That should have been Compassion (in fact, I spent the first half of this story referring to them as Truth by accident).

And I think when I get to a good spot to do so, they are getting referred to by actual names (Agent Kirkpatrick, Agent MacNeill, Agent Amari) for the rest of the story.

If you want a non-Concordance person to talk to Adam about the Scarasite, can I suggest Dr. Liljenquist, the child therapist who was possessed by it longest? That might open up another conversation, about helping the Concordance Kids cope with their alien partners (or deal with their own separate problems), if that’s something you feel would be useful. He’d probably have been taken in by the police for questioning, so Adam’s dad could put them in touch.

I don’t know if you have worked this kind of conversation into your story, but I had some fun with it anyway. 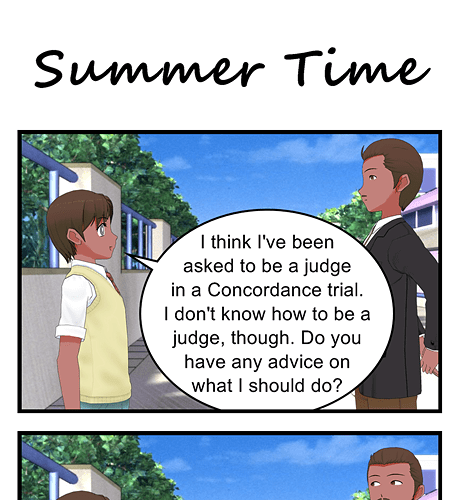 I’m sure I’m forgetting something, but I’m inquisitive, too, as to why Jason thinks it wouldn’t be a good idea.

I’m sure I’m forgetting something, but I’m inquisitive, too, as to why Jason thinks it wouldn’t be a good idea.

So in my timeline of events, this is the morning after the big showdown with the fear parasite from CWC 7. Everything is still cooling off and Adam calls up wanting the parasite’s new babysitters to come over to the compound for a talk, possibly with it in tow. I can imagine Jason being willing to help out Adam with almost anything, the chance of re-exposing Alycia to that entity seems a little too much.

Hmmm. Yeah, she probably wouldn’t react well to that.