"We call it Quill Modern" [Background]

The building takes up a full city block; it was originally warehouses in a not-so-good spot of Halcyon City, but one which Foundation money has helped with urban renewal of. There’s a 10-story tower with office space for lease; the third floor is where the Foundation is HQed. The tower’s footprint, though, is only about 1/3 of the block; the rest is a jumble of structures going up as high as 4 stories, some as low as one, many of them with several sublevels, along with a private garage (to go with the private helipad on the roof). These house labs, manufacturing / fabrication facilities, warehouse / storage areas (of varying degrees of security), a conference / media center, some hidden and remarkably lovely garden courtyards (windows looking down on them), and the family living quarters. There are habitrail walkways between several of the areas (and, underground, passages going between different basements, probably with ground-effect golf carts for some long stretches). It has a bit of a city-within-a-city feel, when you’re back in the non-public areas, with a jumbled floor and building plan that makes sense if you are a genius who understands the reasons behind it.

We all agreed that the Great Room of the living quarters has a conversation pit. These were big in the 70s, which right around when Byron Quill was growing up [it’s ironic that Byron was born just before our world’s Jonny Quest was premiering], so it’s no surprise that he would incorporate them, up-to-date, in his decor. (Personally, I’ve always thought they were, too, too, but …)

A number of images were flashed up, but this is the one that best fit my mental image: 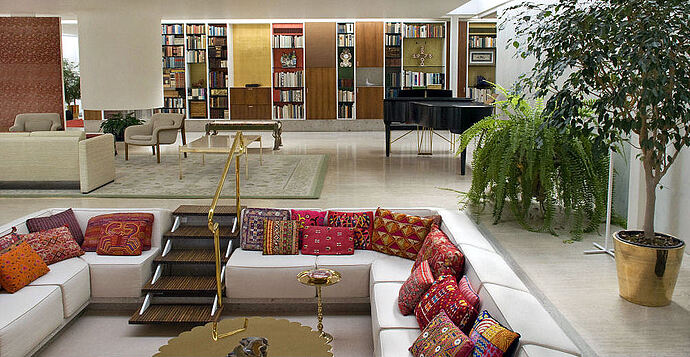 As I was peering about the Intertubes, it occurred to me that a lot of the “modern” openness I imagine at the Quill family compound is inspired by James Bond movie sets – most frequently lavish, open floorplan villain’s lairs from the 60s-70s. These are from Goldfinger and (mostly) You Only Live Twice.

A bit more wood-paneled than I picture; definitely too Western-themed, but the flow from one space to another is right: 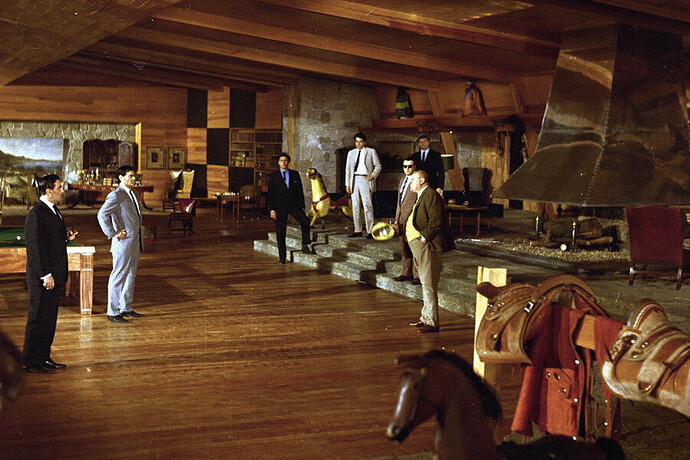 Osato’s office is far too orderly, but the right sense of external light, odd angles and nooks, low furniture, minimalism. Also, helicopter outside the window FTW:

There is not a conference / war room there that is like this. As far as Jason knows, of course. But if Quill were to have made one (six levels below the surface), it would would be a lot like this:

This feels a bit cavernous, but the aesthstic is right. (There would never be a tiger skin on the floor, though. Can’t decide if, however, there might be a pteradactyl skin, or maybe a sabre-tooth tiger.):

Too much old furniture here. Also Dad wouldn’t have put in a piranha pit because (a) who would keep them fed when we were way from the place 250 days a year, and (b) bah, piranha:

I picture a bit more natural light than these sets (we’re not in a bunker), significantly smaller, but with that same feeling of openness. A bit untidy, because even when (maybe especially when) the family was around, things got messy. Quill was not a stickler for neatness (and the Foundation has a cleaning crew that hits up the personal quarters weekly).

The furniture is going to definitely be just modern – cushions or chromed tube steel, no Medieval tables and armoires. Osato’s office, 2nd from the top above, is probably the closest to how it looks when there aren’t stacks of laundry, crates with samples / equipment / spare parts piled in the corners, computer equipment on the tables, etc. Decorations are mostly souvenirs, pictures from adventures, and stuff that hasn’t gotten put away yet.

Another aspect of my internal image of Chez Quill, maybe because I was watching it just the other day, is Morbius’ house in _Forbidden Planet:

1918×822 230 KB
A bit much of weirdness for weirdness’ sake, and a bit _more_outside-feeling, but a similar feel besides that. Rooms connected to rooms without much traditional sense of order (Great Room with open kitchen area, halls/stairs to different levels, a conference room adjoining, elevator to the garage level next to an elevator to the rooftop helipad, etc.)

(The one constant between Bond and Forbidden Planet applies to the Quill Foundation quarters: there have to be floating stairs.)

Now, whether that also means that in the sublevels of the building there are more interesting sights …

Well, it’s not like Dr Quill devoted himself to construction. He was too busy trotting the globe after Science Adventure. And it’s hard to imagine excavating that much space under the city. I mean, it’s not like he might have extended the place into another dimension or something …

(Hmmm. Let’s also hope that Jason doesn’t have to deal with nano-Monsters from the Id …)

This feels a little closed in, but may be a bit more like it. I like the indirect lighting, some of the color choices, and the ceiling projector: 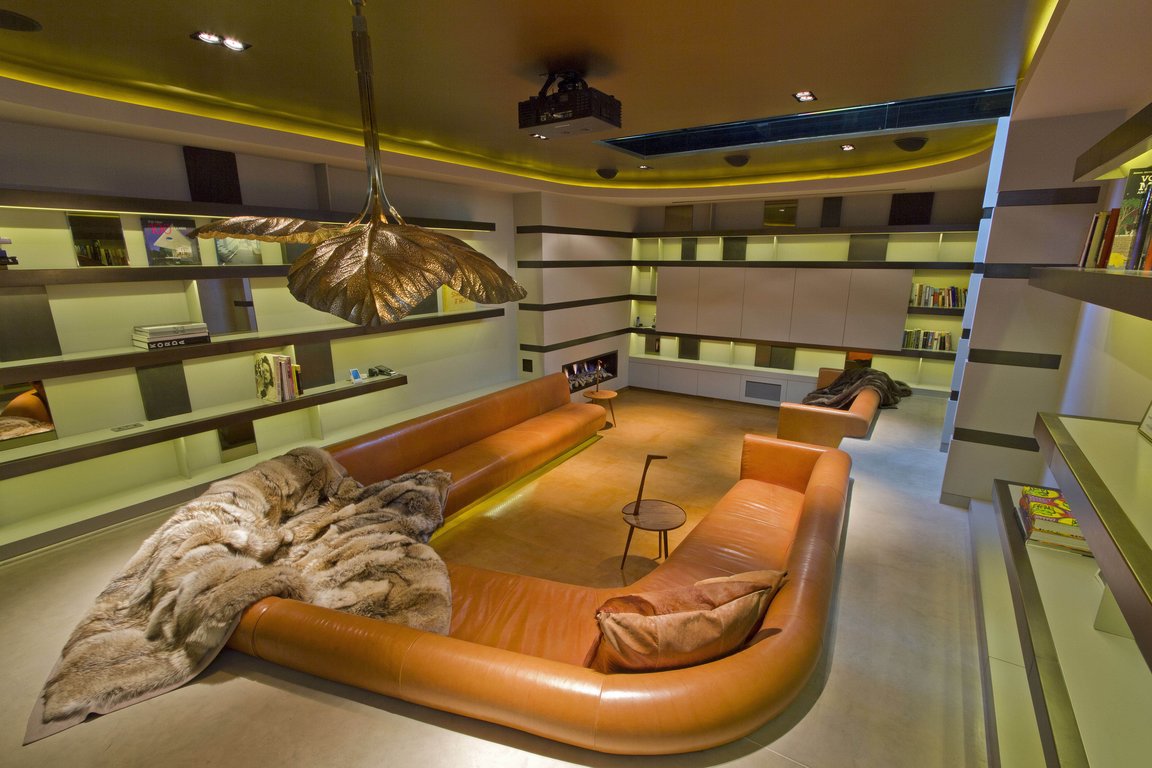 I used to work for ASID (American Society for Interior Designers) and saw some amazing stuff like this in their members’ portfolios. You might check around on asid.org, or the magazine at icon.asid.org, for other stuff.

But these all look awesome.