Chapter 06: The Fellowship and the People of the Air

As heading toward safety, there is dissent among the population.

Carabas inspires the people through great stories of journeys toward safety, treasure, and success. Singing at first, then rapidly encouraged to elocute instead.
Talk Nonsense --> 9 (Partial Success)

People are inspired. Or else they are amused. Carabas is pleased to have had a success.

As we pass through the Mist, the Overlord’s forces have lost track of us …

Ecki is looking at roughly cut asymmetrical crystal shard, atop a mechanism in a chest, sitting on a camp stool. Clouds/fog passing by (a flying ship). Scowling.

Someone comes up, and he puts the gem away. “Lost them in the bloody Mist.”
Siflae becomes visible. "It matters hardly at all. They were in our path, not in our way.
E: They are led by Rowan Greenhand, and he is troublesome.
S: Harbingers are manageable.
E: He does not allow himself to follow the Council; he picks a direction otehr than the Council. He may be simply contrary, but they type we don’t need.
S: Could he cause serious problems?
She comes to the railing.
Looking down distantly at the city of Redvalley, looking back.
E: “They didn’t stop anything here. But they’re not easy to discount. If they’d had more warning --”
“They will never have any more warning to cause us any discomfort.” They grow still at this new voice.
Stepping out. Black dress, feet …
The two of them in unison make room at the railing, if not overtly.

Dress, arm in bracer with a gemstone. Looks a lot like the gem in the necklace that Rowan found.
“They are powerful in their own rights, perhaps. But I have not seen any reason to be concerned with their liek. They don’t unederstnad the scope at which we operate. One loses track of flies buzzing out; it will not ruin your life’s plan. We have much to do. Put this from your mind for now, dear Ecki; I need your mind turned toward more significant things. We have plans to make, timing to set.”

She turns her back on the city. It is done.

Siflae immediately follows behind the left hand. Ecki looks at the city. He scowls. He steps away with a huff of annoyance and disgust, and a flick of his cloak.

(Where are we going?)

Heir stuff.
Bill’s suggestion: 'In Broad Terms, Whatcha looking for out of tonight?’ Check-in
Bird People …The bird people are too heavy to naturally fly, but can glide - BUT they can also naturally use the ley lines.

The royal family lays eggs on the island, which accumulates magical potential in the shell of the egg. When it hatches, the child is infused with power and can fly anywhere.
That’s the island that got taken down by the Overlord.
Heir gone. Eggs gone. Royal family shaken.

Relationship between the People of the Air and the Ohir, back in the day … long history of conflict and fighting. And they have a communication with the birds (and as well other peoples).

Days have gone by. Rations are running thin.

Approaching a flight of the PotA. How do you know, and how does that feel?

Not a sign from them, but a change in the Ohir ruins around. Change from being more towns/statues, more to military encampments. Trees are more woven together.

Have to get the townspeople to safety, so set aside concerns. “It’s been years, I’m sure they’ve forgotten all of that, and I never hurt any of them …” #NotAllOhir

In the Land of the People of the Air 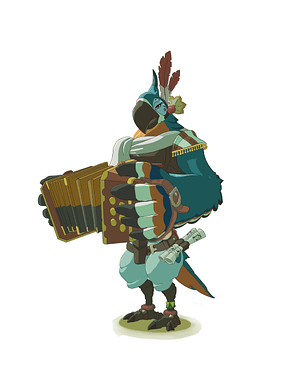 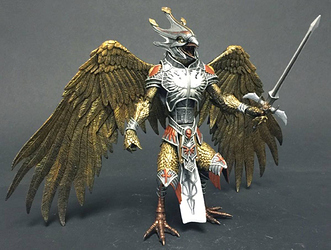 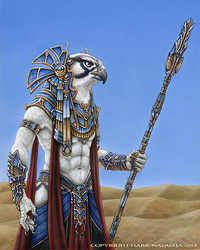 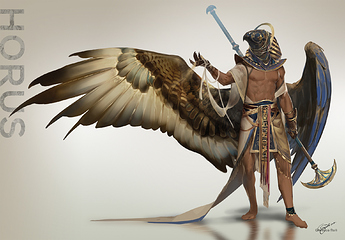 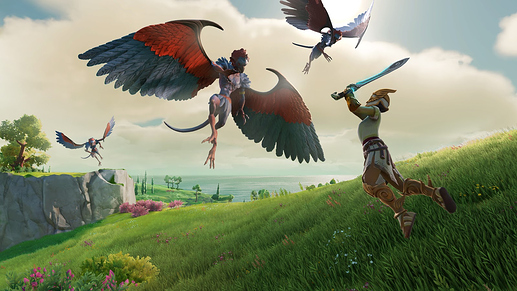 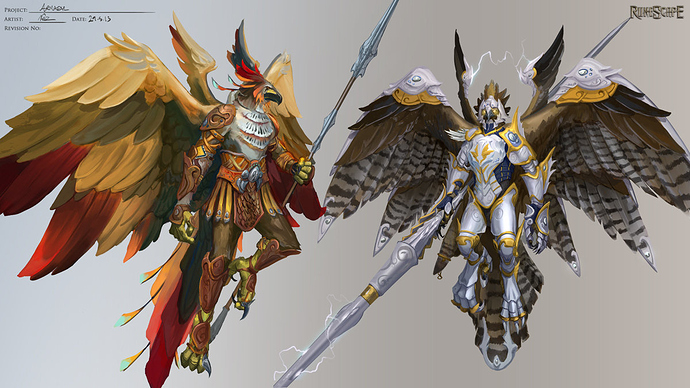 Intercepted by their guards, commanded by a young female, the new heir. (Aarakocra.)

They look at us individually. Mostly the Fellowship (a bit to the villagers)

A bit of surprise/caution toward Carabas.
Wynn is regarded with nearly wonder (as in, “how is it one of your kind is still alive?”).
Virens – looking at notches on his spear about his history/rank, with a nod.
Rowan, she sees the axe, tugs on shirt, ends of sleeves, as if looking for something - a bit of a frisking. (Weapons up, then down again when all clear.)

S: You are from Red Valley, yes? (Very human voice.) Why were you there?
R: Horoscope, Ley Lines, island …
S: You knew what was going to happen?
R: I presumed.
S: That something would happen, or that would happen.
R: One of those things.
S: Harbingers! What of the island?

S: Did you have something to do with that? (Weapons are gripped more tightly)
V: We battled those who might have been responsible for that
You know their faces?
Yes.
We should speak more. Are these flock under under your protection?

Arguments. Rowan catches gist of the body language. Everyone gets a bit of it. She is definitely in charge, beyond just this scout troupe (Virens is sure of that). Ann catches the name - Sakura (name, with an honorific). She finally snap an “Enough!”

You must speak with our {Rulers/Priests}.

They can all glide, but the nobles more so and can fly (attunement to the Ley Lines and their energy). Gliding is a survival characteristic. 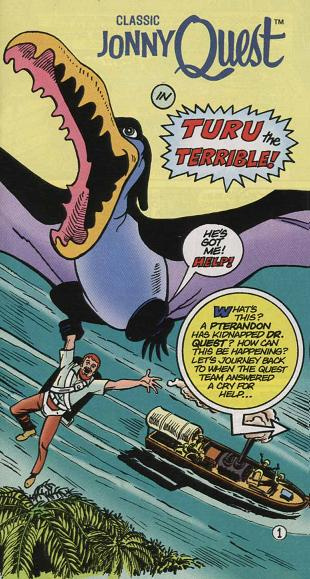 Leader (secular) of the group is a woman, related to Sakura. Ghnima. The shaman of the tribe there, too – a couple with Ghnima: Seghata
Chatter in PotA language, then change to Common.

Virens is introduced as a Second Spear.
Rowan as one of the “Freely Roaming Harbingers”.
Wynn.
Gestures at Carabas
Gestures at Ann.

The Spear fought the ones who made the island fall, and knows their faces.

G: What would you have of us?
Ann: These people are refugees. We ask that you protect them until they can find a better home.
G: When two {flocks} are both harmed by catastrophe, they join together so that they can continue to thrive. Their {nest} has been destroyed, much was lost, ours was destroyed, and lost. We will take you in. But …
… [back to us] we need you to help us. Let us speak further of this in private.
Ann: These are all hard-working people, and will be an asset to your nest. And we can speak of other things.
Shaman: They will have a space. We welcome you. Who speaks for the rest?
Lalow [the Bandit]: I will –
Jane: [grabs his collar back] We all speak for ourselves, but if you need something organized, my husband I know everyone here. Very well.
(chuckles)

Back in the inner sanctum. Torches. Guards/attendants. Chief rests on a seat. We all sit, explain, etc.
Gist: Sakura’s older brother, heir to chiefdom, was on the island and bring back the eggs of the next children, including the first of his clutch and ours … (choke) … island came down, and we lost a generation of our leaders, family … The towns say it was random, but it must have been known. Who did this?

Rowan: [Pulls out horoscope, scroll, attachments] Stars when the island fell … ley lines …
Seghata is so into this.
Hours later, the only person possible is the Grand Master Tenebrios.

“The Corruptor? The Ohir destroyed them. It was the one useful --” Pause. “It was one of the greater things they accomplished in their empire. Are yo saying the Corrupter is still here, in the world?”
R: Yes.

Sakura is near Virens (duiring the conversation). “There was word when my brother was sent to the island that there was a Tuskan company near the islands. Did you know of them. They were near it when it fell.”
V: They were under it.
S: I am very sorry. Easy to forget we were not the only ones who suffered a loss. I cry your loss.
V: They walk a path, I must follow.

Wynn - Demeanor toward him is guarded.
Shorter-lived. Seen as primitive and crude (even if a definitely threat).
Conflict because they had to cross Ohir lands to get to the island?

G: You said you knew their faces. You’ve seen the Corruptor.
V: (Describes the folk he saw, but turns to Wynn and Rowan for more detail)
G: You saw their servants. A Harbinger and a … General of the Ohir.
W: They no longer has the right to call themself that.
G: They have devastated a generation of our people. We are first among tribes. The island held … its fall changes everything of our relationships with the others of the PotA. This was an attack. We have stories of the Corruptor, the Grand Magister, the Ancients before the Ohir, and their hatred of us. [Accurate? Well, she believes it.]

Rowan: May be giving Tenebrios (and the Council) too much credit … not so much as some great ineffable plan, as much as simply being petty.
And all that consideration … indicates where they are going next. One of the great flying cities.

“If you face those who serve the Corruptor, strike speaking our names. Where does the Corruptor go and what will you do?”

An old city that predated the Ohir. A floating city on a Ley Line … chained in place to keep it from drifting.
Heigflæma – Hior’s Flame – Now known (by its current inhabitants) as Chains Cross. 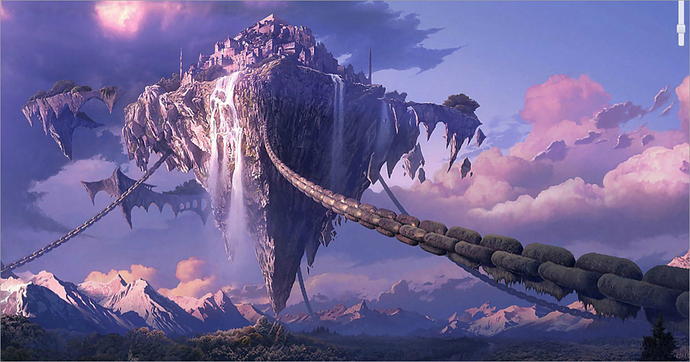 End of Session
Downtime!
Setting out for Heifgflaema / Chains Crossing

The Duality of Man:

Yep, I’m both those guys.

It’s one of those well-known burgher chains you can find in any town.