Here’s a set of suggestions for how to implement some of the touchstones we listed like “floating islands” and “steampunk trains”. 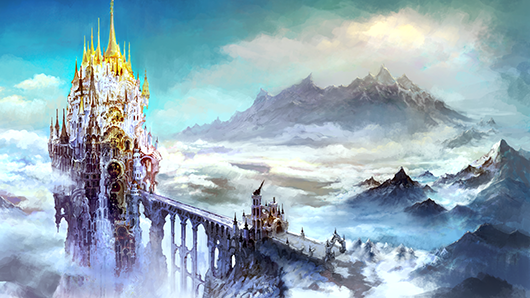 The world is criss-crossed with lines of energy (ley lines, ether, quintessence, call it what you will). At higher elevations, away from the heart of the world, the flow is weaker, while in the lowest possible valleys, it grows dangerously intense.

Geography is such that multiple “tiers” or “layers” of land exist, sometimes supported by solid stone, other times levitating in the air. The supporting stone by itself isn’t strong enough - ley lines connect the lower and higher tiers and form an unbreakable pillar. 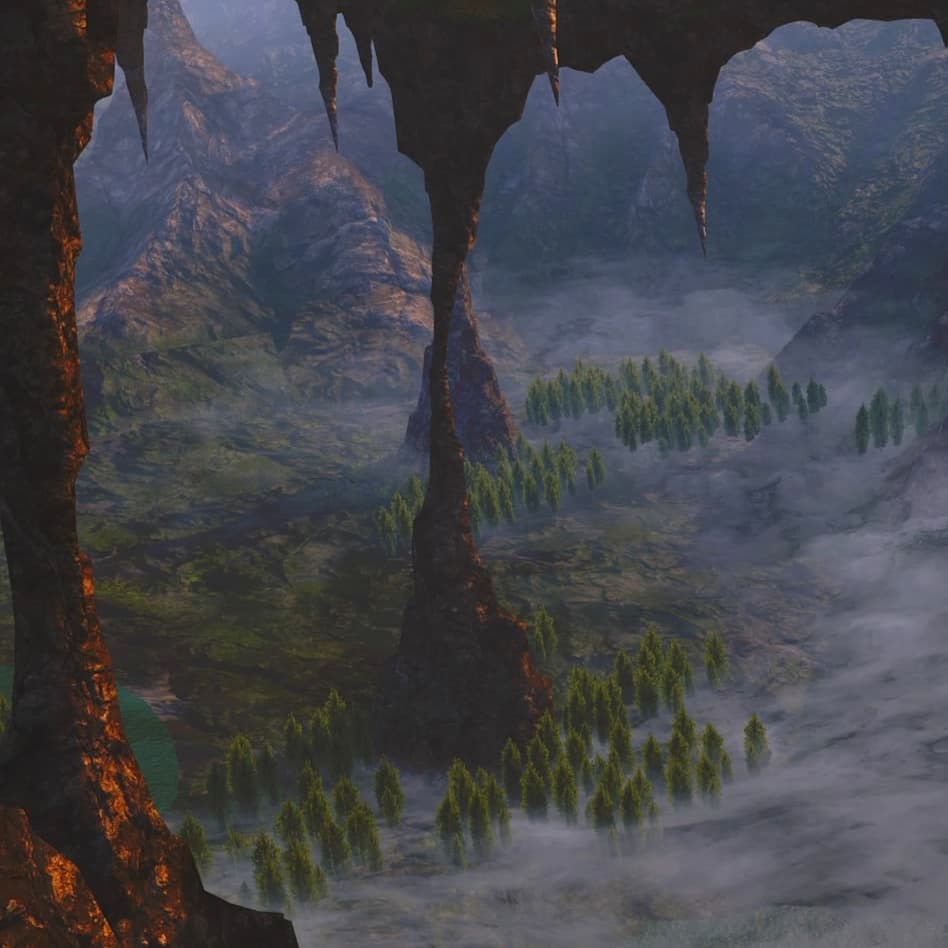 Some scholars believe that some great upheaval in the past caused this unusual disturbance. Others think that parts of the world were deliberately raised up by ancient cultures and potent magic, perhaps to create an impenetrable boundary from less-gifted rivals.

Invisible lines of energy still connect the lower lands with the higher ones, or bridge the gap between the “surface” and the occasional floating landmass. Magitek has allowed inventors to create “mist barges” that ride these ley lines, like a gondola lift or a train on invisible aerial rails. Mist barges cannot deviate from their paths, making them unsuitable for general transportation, but excellent for moving people and cargo from one landmass to another. 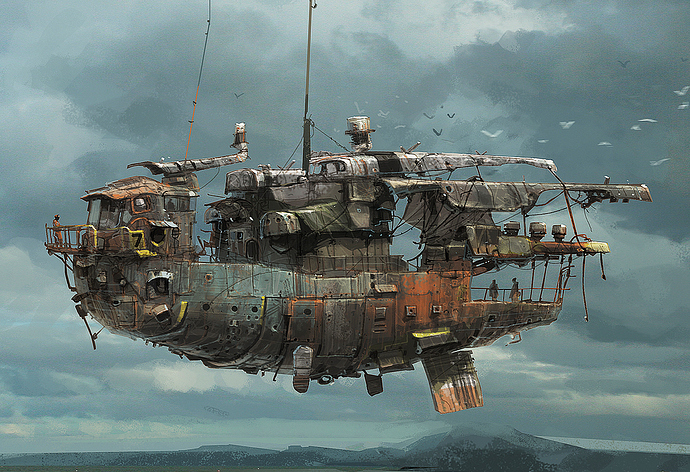 At the lowest elevations, in deep valleys or rifts in the earth, the accumulated magical power does strange things to nature. Animals, plants, and even the occasional humanoid have been spotted, growing to giant size, or gaining strange powers. 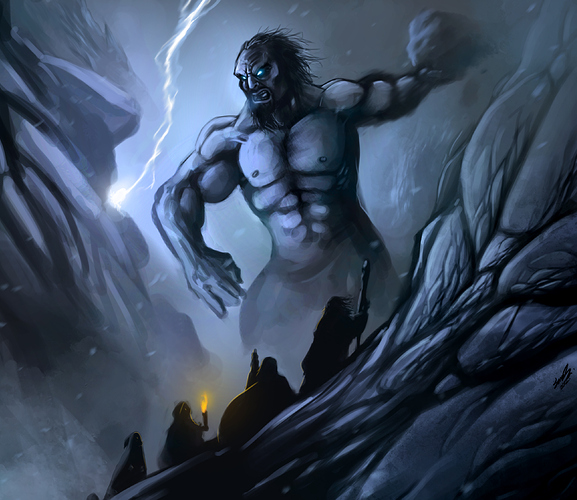 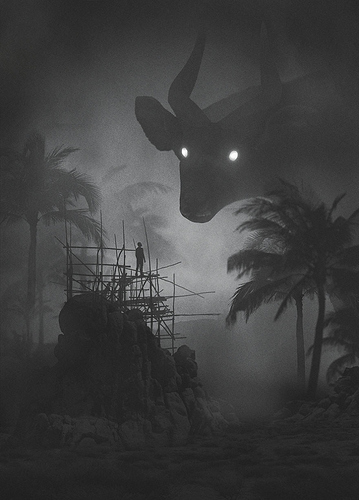 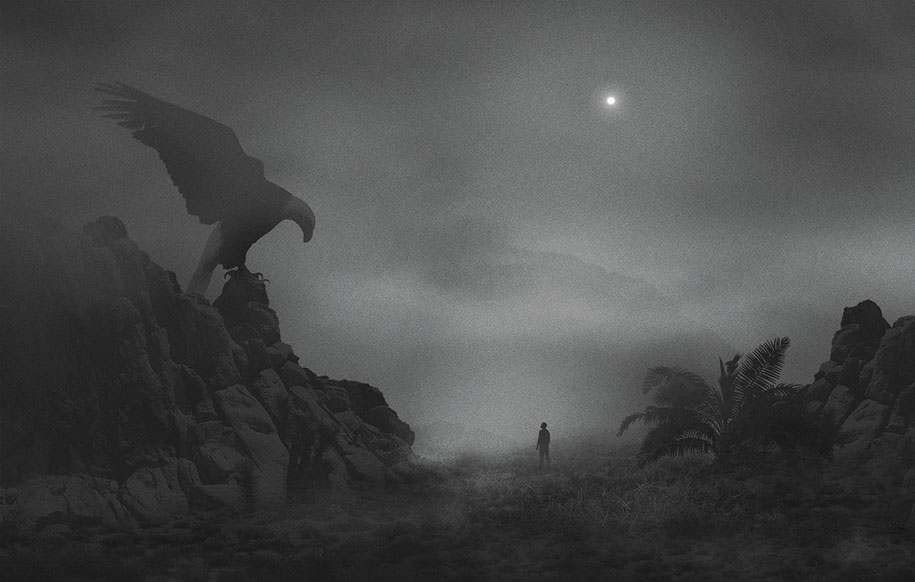 Some of these images are from FFXIV, but the idea of Mist-powered airships is part of FFIX, and I’d probably lift some of that aesthetic for such things.

The idea here is that you can generally travel from place to place on foot, via wagons, riding mounts, and the like, and the occasional actual flying island is still reachable via mass transportation. That said, there are still significant natural boundaries.

The empire of Nelres had its magic and strange powers, while the orcs of Tosk rely on far-ranging independent warrior clans to enforce their order. So empire is the exception rather than the rule. Fairy-tale style long-lived kingdoms and sleepy hamlets don’t repeatedly get steamrolled by the latest random conqueror.

Ties to the Overlord’s stuff:

My art skill is terrible but basically this is the idea. 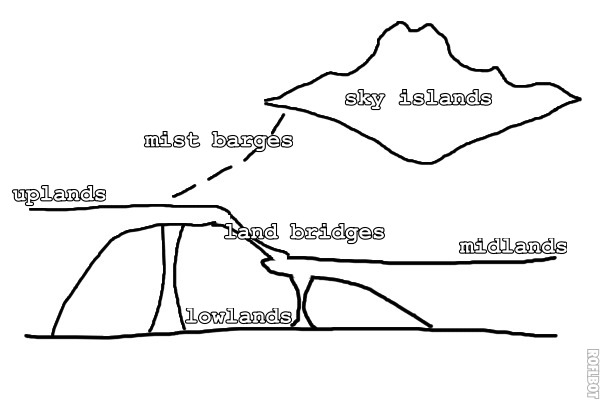 Sample areas that would emerge from this geography:

A way to think about this (if I’m following) is the 3D elevation differences / land bridges / mist barges are analogous to the more 2D “Kingdom X is on an isthmus from the mainland or sits in an isolated valley with only a pass or two through the nigh-impassable mountains [land bridge]” or “Kingdom Y is on an island offshore, accessible by ferry / aerial tram [floating island accessible by mist barge]”.

Only more cool, of course.

Right. The geography makes that the default configuration, not the exception.

I like it as a concept. Leads to some narrative drama (“well, the safest way is to head north east for five miles and cross the bridge or… we can delve into the mists.”) and some interesting geographical locations and ideas.

Could part of the reason Wynn’s empire fell is because it literally fell into the mists?

Does part of Rowan’s power and connection to the earth involve him purposely going into the mist? Or do his leyline powers mean that the Harbingers’ have some level of control over the mists (as someone who has been playing Bloodstained: Ritual of the Night for a few days, this has some interesting possibilities)?

Is part of the reason Catlings are “remote” because there is only one pass in and out of their lands?

All interesting questions with so many more I haven’t even begun to think of.

So I’m imagining a world similar in population / communication / settlement akin to 0th-12th Century Europe: some sizeable urban centers (trade, education, crafts), a large number of towns (usually around some sort of fortification and with their own temples), numerous small hamlets centering agricultural settlements, but still vast wildlands inhabited by wild animals, villains / runaways / hermits, criss-crossed by occasional roads that may or may not be maintained (or patrolled) by the nearest rulers.

Much of all that is in the Midlands.

Past falls of civilizations and societies (looking at you, Nelres, but you’re probably not the only one) is not necessarily followed by the survivors rebuilding amongst / using the ruins. Lands may be depopulated, roads lost to the wilderness, depending on how governance and trade have changed, or how terrible the fall was. Populations may return to a place over time as memories fade, or as resources (land, military outposts, trade) seem of value.

(The Toskans are an accelerator here, like Rome: building roads to move armies, towns and cities around encampments, etc. While they let the locals largely alone, aside from tithing, anything that disturbs the peace will be met with action, I suspect, both short- and long-term, as needed to resolve it.)

The Uplands are mentioned as locations for magical kingdoms and lost civilizations. I suspect the factors above (fear of how things fell apart; limited trade opportunities once everything goes to hell; etc.) make recovery there slower, until someone rediscovers the advantages (being in a higher-magic location) of rebuilding there, or exploiting what was previously in place.

s part of the reason Catlings are “remote” because there is only one pass in and out of their lands?

Cats like boxes and other hidey-holes from which they can peer out. If they are up high, all the better.

The Shire being an isolated Upland pocket area (perhaps the rarified and magical atmosphere enhances the production of pipeleaf) makes fine sense.

See, descriptions like this are just inspiring me to design a possible catling Upland pocket inspired by the cat tower at your house.

And have I mentioned how smug and superior they feel for having found such a perfect spot to peer out from?

For what it’s worth, the original suggestion had magical power concentrated low, not high - that’s why there’s monsters in the depths, and it’s what I’m talking about when I talk about the mist.

What Uplands had isn’t raw power, but societies with lots of magical knowledge or other accomplishment. That’s not to say that there won’t be pockets of high or specialized power up there, and one such place could be the Shire, for any number of reasons.

Ah, yes, my misunderstanding. Though, with Ley Lines and Sky Islands, there’s something going on up higher. Maybe it’s more concentrated within those lines themselves, thus leaving the rest weaker.

(Experiments at seeing whether spells can be cast more efficaciously while riding a Mist Barge tend to end poorly due to the Mist Barge losing its power when its rerouted to a spell. Researchers – those who survive – continue their efforts.)

If we go with an arrangement like this, what could people Command Lore about? Here’s some suggestions.

Tossing this out there to see what people think and if I’m understanding the mist idea properly. What if the way Nelres was unnoticeable from the outside was they had found a way for non harbingers to manipulate the mist and used it to protect their city. And the method to do so is what the Overlord was after.

I’m pretty okay with this, and it makes me wonder - are the city ruins in the lowlands (and hence actively dangerous for some folk to visit), or higher up (and their people brought the mist upwards?)

Here’s a condensed idea of my idea.

What is the geography of the world?

The world is divided into four general types of landmass:

What is the Mist?

Magical energy flows like a spiderweb around the world. It concentrates at low elevations, and is rare at higher elevations. The filaments of magic are called ley lines.

Physical matter tends to accumulate and grow in strength around these ley lines. Magical energy is sometimes used in manufacturing to make metal alloys with supernatural durability, for example.

In the Lowlands, the concentration of magic draws out water in the atmosphere, creating an effect called the Mist. “The Mist” is thus just ordinary magical energy, but at dangerous levels.

What are land bridges?

Land bridges are naturally occurring stone that connect different land-masses together, like two nearby plateaus of Midland, or a Midland and a nearby Upland segment. Their location is not accidental - they are strengthened and kept in place because they sit on ley lines.

Most land bridges have been sculpted into roads, staircases, etc. to make them useful for travel. Land bridges can be just wide enough for a few pack animals, or wide as a multi-lane highway.

What are Mist barges?

Sky islands are kept afloat by ley lines connecting them to the surface world, like invisible struts. Engineers have found ways to mine rock from these sky islands that interacts oddly with ley lines. They fit this into a gyroscope, which can then “pull” a vehicle along the ley line, even in midair. These craft, called Mist barges, are used to travel between Sky islands and lower landmasses.

It’s hypothetically possible to have a Mist barge that can fly anywhere, not just along ley lines. This would require a significant source of magical energy, however.