There’s a ton of obvious inspirations out there and we’ve listed some of those on the Visual Inspirations thread, but there’s unconventional picks too. Here’s the Talespin episode “Time Waits For No Bear”:

The premise: a 30’s plane pilot and his smart-aleck kid sidekick have to turn over some valuable cargo to a crime boss and get paid, while avoiding his nosy boss and keeping some passengers happy (“Smiles!”). It’s a very light-hearted, comedic take on the smugglers-and-scoundrels-do-a-heist tropes, and great for how to sell a dangerous guy and his goons without anyone getting seriously maimed.

On the topic of custom weapons…

The character Cayde-6 from the Destiny franchise is voiced by Nathan Fillion, and apparently pretty funny. A best-of video:

As expected of his voice actor, he’s a scoundrel with a penchant for smart remarks (much more here), but he’s also got a custom weapon that reflects his love of gambling, the Ace of Spades.

Someone on Imgur 3D printed one: 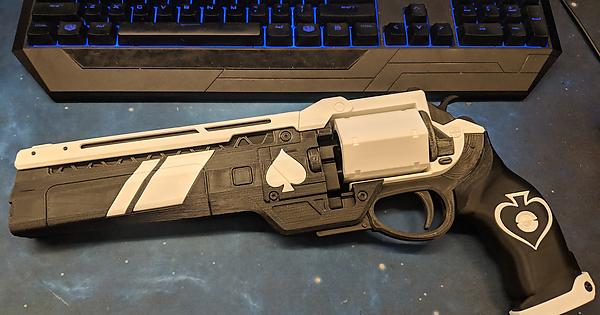