So here it is. We’ve got three big events that will be winding together:

Everyone will be involved. I know where things will be going, and I hope to have a few surprises and heartwarming moments and all that. But what about some of the details?

I’d like folks to contribute ideas, suggestions, or opinions on the following:

I want a suitably villainous name for him. Right now his themes are “spiders, automatons, eternal conflict, paradox, domination, nihilism”. He is a mastermind, a manipulator, an unsteady fusion of four different minds into a coherent (but not consistent) whole. I’m looking at names like:

What do we think, based on what we’ve seen of him so far?

Jenny will also need some kind of catchy name. By default, “Poppet” works fine. But assuming she survives…

The genius inventor usually works at the top of their particular food chain, but Aleksei Sidorov is a subversion of that. Still, the imperious cyborg deserves his own name, doesn’t he?

…Unfortunately I don’t have any great ideas here, but if someone else does, let me know.

As I work on other stories, I’ll ask more questions on this thread.

I would want to steer away from the Ashen Emperor for purely selfish reasons (with the renamed Dread Queen being the Azure Empress, having two characters with an Emperor title could cause confusion for our peripheral audience).

The other names are good and could work, but allow me to present an alternate line of thought…

Pyrrhus: (mid-fight, in a dominate position) Don’t you see, those people merely need direction. Control! I am Control!

Poppet is a good one. Puts a face to the Poppet system and allows for referencing a character when explaining the concept when it shows up latter (assuming Phase 3).

I like her. She’s interesting and has some internal conflict (“Once a weapon is fired at its one and only target, does it cease to be a weapon?”).

As for what side she could end up on, if Pyrrhus is the Spider, I feel like she could be the Fly in the Ointment (which is to say, a highly motivated and interested third-party between him and our heroes).

My only worry there is that I immediately think about “Get Smart” and other stuff. But on the other hand, “control vs. chaos” is at the center of Pyrrhus’ paradox.

The cheesy option, because he’s a composite of four personalities, is a name like Fourthought, but I am hoping for something more grandiose.

Responding before I read Mike’s notes.

Of the three choices offered, I shy away from the spider stuff, but because Arachnos was the City of Villains main bad guy org.

I like “The Ashen Emperor,” though the nanobots are more less ashen than black, which made me think of embers, and something like “The Ember King,” which pulls in some phoenix sorts of associations as well.

But I think “Pyrrhus” also works. It has a “Pyrrhic Victory” association, but also the Funeral Pyre, which gets back to embers and &c. Also has a sort of “Peerless” sound to it, which would also tickle his fancy.

I’m also not convinced Jenny Byrne needs a fancy name. But if so, Poppet, as a beloved child or a voodoo doll both work in creepy ways.

I’m sure Sidorov thinks he deserves a fancy name. I think there is a vein of humor available in his selecting more and more dangerous / threatening / pompous names over time, even as his superiors / opponents / lackies out of earshot keep calling him Sidorov. Or worse. 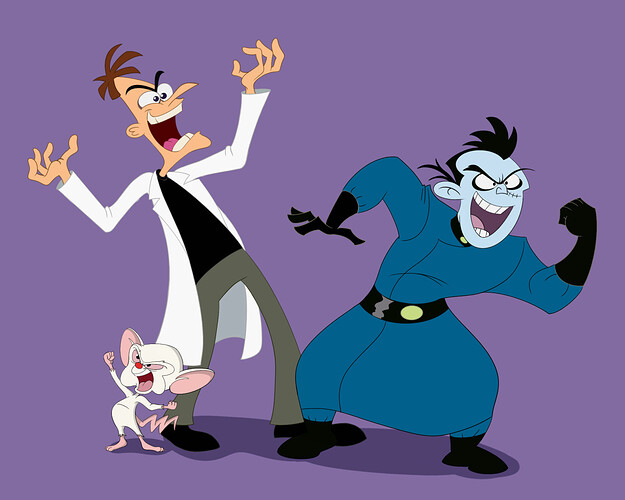 So what I’m hearing is I nailed it first time

Oh, there was more than name stuff.

I feel little ownership of the character since she was a backstory figure with no dialog, as I recall. So speaking just from my impression of what we’ve seen …

… she’s been fine, but not compelling. She kind of orbits around “annoying opponent who causes the protagonist problems, but more heartburn than existential dread”. The Irish Lilt is a bit grating, too, if only because it doesn’t feel authentic, in part because she’s not “authentic” because she’s a force-growth clone.

I feel like there’s really some tragedy and drama there, around her background, her indoctrination / programming, her sense of (in)humanity. I think, she could jump in any direction, but I feel like her arc really is pointing her toward ending up on her own side – with a lot of sympathy from Jason, disdain from Alycia(s), jealousy all around, and plenty of room for future appearance.

To riff off of my other idea, those epithets could also suffer from escalation as time goes on.

“There are those who called me Sinister …”
“Um, didn’t you call yourself that, Boss?”
“Silence!! But I am more than just Sinister. Henceforth, the world will tremble at the thought of the Splendiferous Doctor Sidorov!”
“Um, Boss, how do you spell --”
“SILENCE!”

Does Zola actually use “Doctor?” I think he usually ends up (post-self-operative days) with a full first-last. “That face … in the computer consoles … Arnim Zola!” But your point remains valid.

with a lot of sympathy from Jason, disdain from Alycia(s), jealousy all around, and plenty of room for future appearance

That’s exactly what I wrote her to become, so that’s gratifying. She’s also trolling/teasing Jason with the Irish accent at this point, it’s not an always-on thing.

So Pyrrhus, Poppet, and Doctor Sidorov it is. Thanks folks

Next up, three questions for @Dave

While I know the question was directed to Dave, I know this bit of fiction exists which concerns Alycia’s parentage, which partially answers that second question.

And now the questions for @insomn14

under what circumstances did Adam acquire his original Concordance shard?

(oh cool, I have art to help answer this question)

So when Solaris first came to Earth, they needed a host. Adam was just the first acceptable host he ran into. It was in the middle of the night, so Adam was asleep when Sol offered him the power. Adam, being partially asleep and thinking it was a dream didn’t really think any of this through. And then he had an energy being burrow into his soul and there’s not really any mistaking that for a dream. 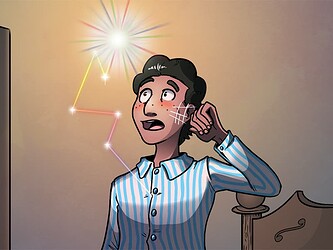 The rest of this is just broad strokes story bits that I have noodled on a bit. The reason the Concordance sent Sol to Earth was due to some enemies of the Concordance coming to Earth and the Concordance needed a local champion to fend them off. Once Adam was empowered, those aliens kidnapped him (and his parents saw that part, which is what I imagine soured Mama Amari on anything having to do with superhero-stuff going forward). 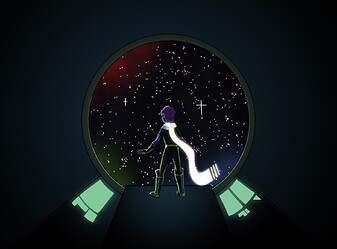 Once in the alien ship, Sol teaches Adam the basics of being a Concordance agent on an escape from the ship. Somewhere along the way, the aliens do something to disrupt Sol (which is why he is broken during the first quarter of the Menagerie game) and Adam has to disrupt the aliens’ plans on his own. (That’s about all I got, I’ve only thought this through enough to make three pictures.) 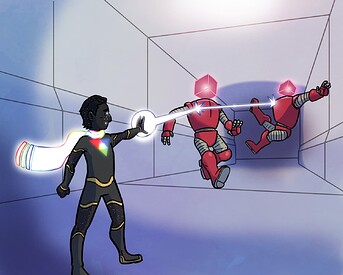 why was it considered inferior or defective?

So the Concordance keeps sending shards to Earth and they keep disappearing. Concord’s is Solaris Gamma-Two and the Trio’s is Solaris Game-Four, which also leaves One and Three unaccounted for. After this bit of fiction, I like to think the Dread Moor has one of them captured somehow. And Sablestar is likely involved in the other one (or possibly both) going missing.

And with the Concordance’s usual smug superiority, it cannot be their fault this keeps happening, it must be something about Earth. So after not hearing back from the first three, they stopped sending Shards to Earth until they got Sol’s destruction signal, which led to them sending SG4 to Earth to investigate. That’s also why they split SG4 between three different people to try and add a bit more protection this time.

So because when SG4 met Concord, it had to be the inferiority of that shard’s manufacture or malice on the part of Adam that could lead to its destruction and giving its power to Adam. Concordance shards don’t go native and sacrifice themselves for the good of their chosen world, they are eternal guardians who must be preserved for the ongoing continuity of the power of the Virtues.

What makes a host acceptable?

What makes a host acceptable?

Hearts imbued with high levels of the Virtues, with minimal amounts of interfering emotions (fear, dishonesty, and hate). For this reason, younger (and more naïve) hosts are preferable.

who is Alycia’s mother?

I always left this unanswered, to leave some mystery (about both her and Achilles), and a plot element to establish by whomever could come up with something spiffy.

It’s one of the few things (as the reference Mike found indicates) that Achilles ever expressed any regret about.

My vague sense was that she was someone Achilles truly thought he loved, and, at some point, realized it was either her or the Great Mission, and chose the latter. (Did she leave him, after an ultimatum? Did he send her away – keeping the kid – when he decided she was too much of a distraction, too much of a weakness, too great a temptation to compromise? Did she have to die because she was visiting her Mom in Bhopal when that particular Great Mission event happened? The tragic story possibilities are practically endless.)

does she know and/or care?

Alycia is curious, certainly – but she’s forcibly separated herself, emotionally, from being “child of her parent” enough that it isn’t an obsession for her.

Of course, emotional calm can be suddenly shattered by an abruptly changed circumstance. If she were to suddenly come face to face with someone claiming to be her mother … she would be incredibly guarded, but would absolutely have major questions for her.

As implied above, I care, but I don’t have a commitment to any particular answer. Indeed, a really interesting answer that up-ends the above narrative would also be cool.

Ultimately, I left those details blank (even to myself) for a reason, and with the understanding that they would quite possibly be filled in by someone else. If the answer remains a mystery, or is answered with something interesting and fun that informs or even evolves the character, that’s all good.

(I might have something to say about the Achilles Chin / Hecate slash-fic, though.)

A brilliant mind? An innocent?

As implied above, I care, but I don’t have a commitment to any particular answer. Indeed, a really interesting answer that up-ends the above narrative would also be cool.

I am cooking something up that I hope you’ll enjoy. Based on this, I’ll move forward with it!

Or … maybe I got the different sides of the equation wrong …

(Achilles: “If the Great Mission never succeeds, I will have been a failure in life. But by stopping her, I have had one success for humanity that I can carry to my grave.”)

With Phase 2 wrapping up, and Phase 3 starting probably in a couple months, I want to see what @Dave and @insomn14 think about carrying over some of our P2 supporting cast.

Aside from villains, which of the following people would you like to see more of?

My Other vote is for Dr. Sidorov, but mostly for the lolz.

He’s a villain so definitely will be appearing