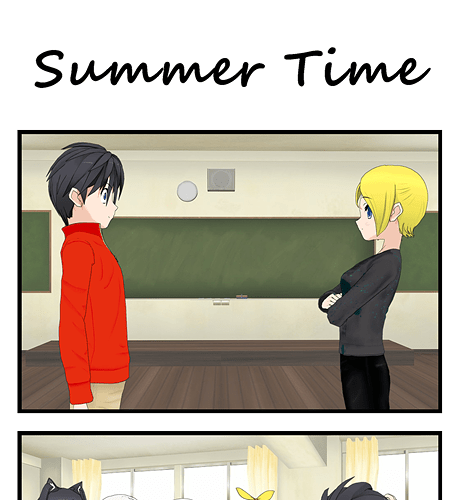 I’m simultaneously most and least proud of this comic.

Edit: originally inspired by an old cutscene where Aria briefly speculated that Leo might find a female Jason attractive: 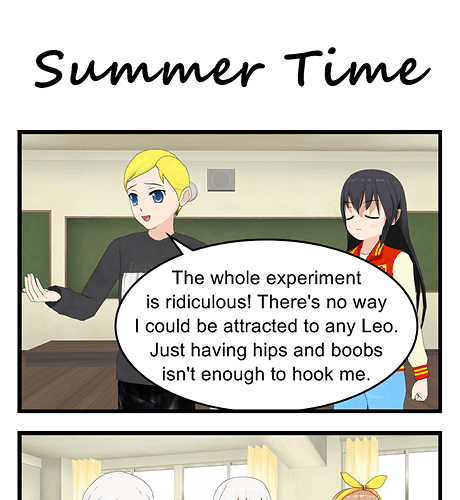 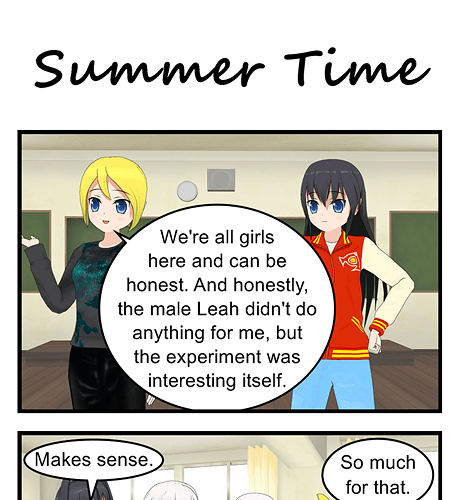 I don’t even have a story at this point, it’s just trolling Jason and making the girls react with funny faces.

Edit: this is me playing to these characters’ genre conventions. As the Red Ranger type, Leo is too hot-blooded to be a chick magnet, but he’ll have a loyal girlfriend who goes into battle with him. As Two-Fisted Science Adventurer, Jason should have wider appeal. Even if (as we see later) he’ll get killed if he tries to benefit from it. 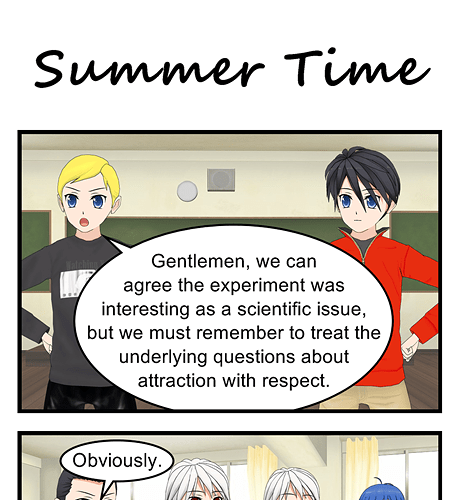 Jason knows where his priorities are.

Edit: The overall inspiration for these came from Doyce’s observation that the Masks EG kids were doing very teenager things. It seems to me that if you get a bunch of older teen science geniuses together from different universes, the first thing they’ll think about is whether these newcomers are hot. 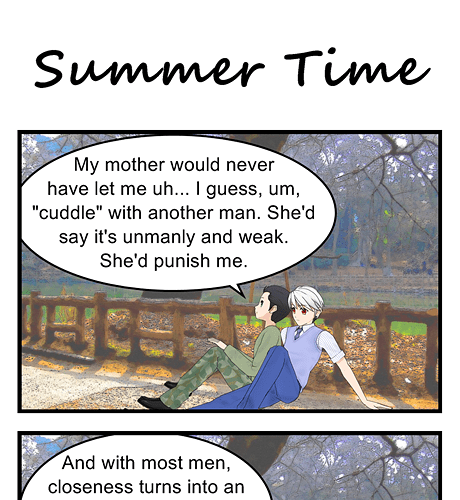 Inspired by this article: 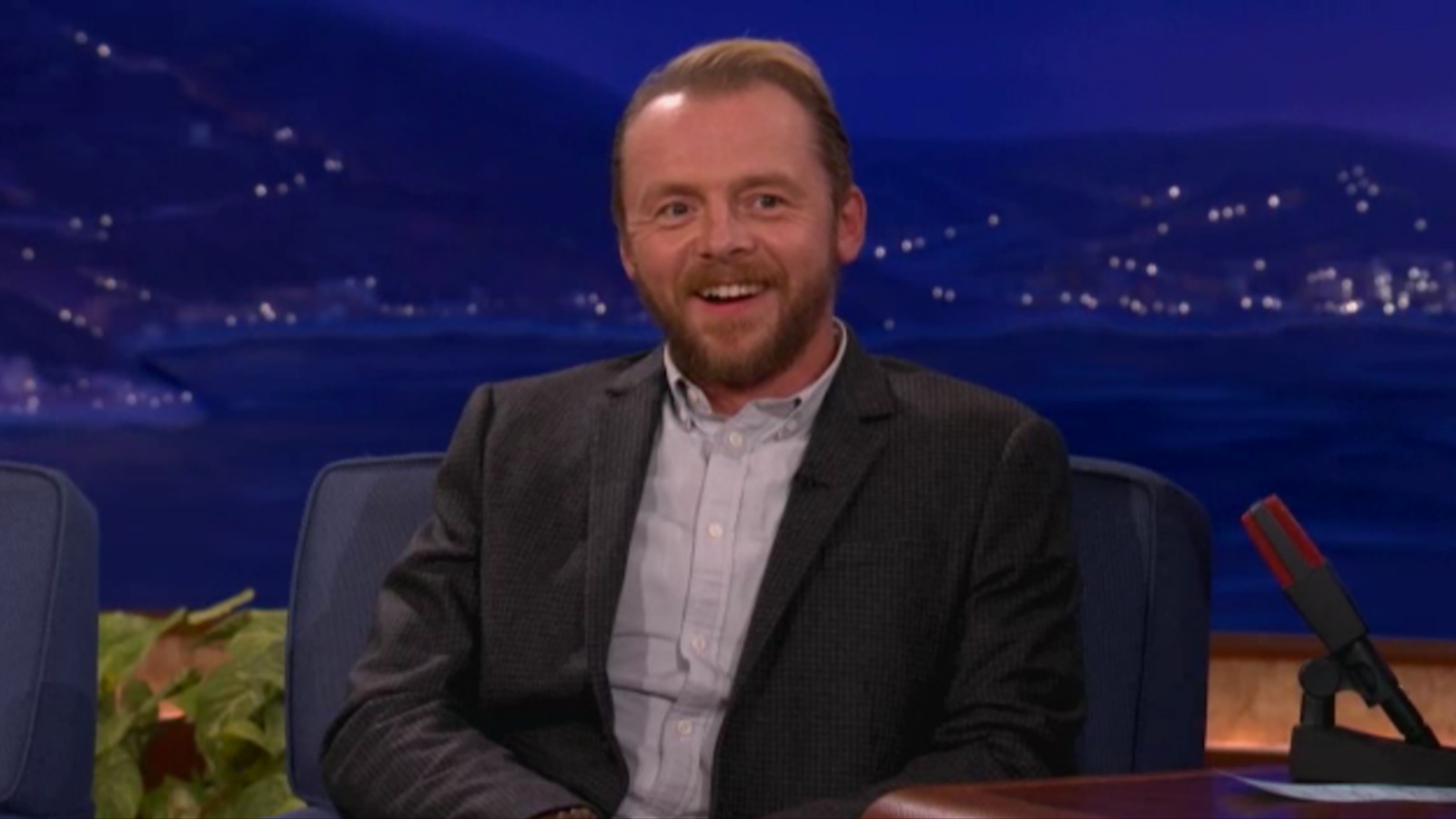 Simon Pegg Wants Straight Men to Start Snuggling Each Other

Actors/writers Simon Pegg and Nick Frost have been close friends for a long time. Just how close are they? Well, there was a time, back before either of them had any money, when Simon needed a place to stay and Nick offered to share his bed. Imply...

Edit: originally inspired by an old cutscene where Aria briefly speculated that Leo might find a female Jason attractive:

That was awesome (both the comic and going back and reading the inspiration). I don’t know if we ever fully nailed the teenager dynamic, but looking back on it we certainly had the fever-dream relationship-speculation OMG-the-insecurity part down solid.

Okay, now I’m laughing at the comic ever harder.

And, yes, the rest of the series is triffic fun as well. Or maybe that’s just because I enjoy seeing Jason and Alycia both being trolled in their own way (and in a well-meaning and hilarious fashion). 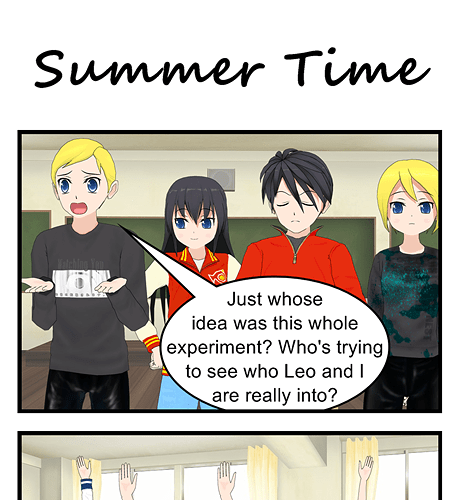 I just have problems not role playing Alycia

On that note, any thoughts on how Jason, Medea, Alycia, or Alistair would react to the “experiment”, and were the findings presented inaccurate or surprising in any way? 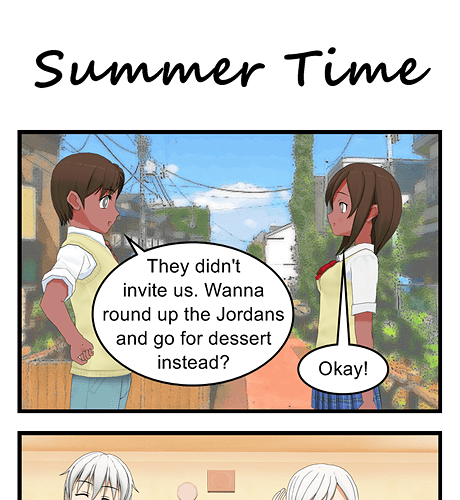 Lest anyone feel left out.

any thoughts on how Jason, Medea, Alycia, or Alistair would react to the “experiment”, and were the findings presented inaccurate or surprising in any way?

Within the context of this light-hearted anime about our characters? Nope. Some possible bluster from Alycia about dignity and experimenting with live human beings and misfocus on such petty concerns when the basic issue of “We’ve tapped into another parallel universe, what can we learn from it” all leading to the, yes, raised hands in the last panel.

In “real life,” I can see lots of long, angsty conversations. And maybe some sparring. Not nearly as interesting.

Of course, even in “real life,” a substantial part of the game was subtitled, Who Leo and Jason Are Really Into, so you caught that spirit well.

Hmmmm. Without going back to the individual strips (or even the original notes) to see if any of the following got touched on, one last evaluation off the top of my head:

Alicia on …
… Medea: Smart, proud, clever, outspoken, and with the advantage of being less testosterone-driven. Not nearly as sexy as Jason, but maybe a more effective person to go on a mission with.
… Alistair: Vishnu’s left eyeball, am I always that moody? I hope Medea gets him some therapy before he snaps. Unless she is his therapy. Which is kind of gutsy on her part.

Jason on …
… Alistair: He sort of has that spetsnaz vibe some of Rusty’s friends did. Creepy. Glad Alycia never got that way. But he’s certainly devoted to Medea, so that’s cool.
… Medea: Huh. Girl me is … kinda hot. That is highly disturbing, and not something to mention to Alycia, and certainly not something to think about any more.. I mean it.

Lest anyone feel left out.

I had to look up the original graphic because of color and size, though I could read a couple of the levels:

Alycia and Alistair are wiser than I gave them credit for.

what can we learn from it

Along with Aria (who studies this for personal reasons), Alycia or any other interested party might figure out a lot about how perceptions of gender inform our own gender identities. For example, I wrote the Medea situation as being as close to Jason’s life as possible, but not identical. Where Jason kvetches about being voiced by a girl in the show, she’d kvetch about being treated as only a girl - not allowed to be shown doing the things she actually did. And as one strip depicts, part of her connection to Alistair is that he acknowledges her for that. Aside from that, there might be some science behind why some people are male in one universe and female in another, but I’ll pass on that.

Those two would have so much fun just hanging out together. Or running together.

That’s how I depicted them in previous strips. I can’t see either of them having any angst or doubt about what’s going on, just being glad to have a kindred spirit to talk to.

a promise to continue to correspond in the future

The Magus power may have been how the Pidgeverse characters come to visit to begin with, in this little bubble of pseudo-canon.

Alycia and Alistair are wiser than I gave them credit for.

Alycia or any other interested party might figure out a lot about how perceptions of gender inform our own gender identities.

Yup. That would definitely be a thread in the “real life” version of this. (Part of the answer being it’s difficult to tell because the selection of which two universes were involved in the cross-over might itself have prejudiced the result.)

Where Jason kvetches about being voiced by a girl in the show, she’d kvetch about being treated as only a girl - not allowed to be shown doing the things she actually did.

I recall she was also irritated by the “love interest” subplot the network insisted on putting in.

The Magus power may have been how the Pidgeverse characters come to visit to begin with, in this little bubble of pseudo-canon.

That occured to me as I wrote it. (Maybe there’s a Council of Magi that is contactable across the universes, hidden in Everard’s full-length dressing room mirror, and this first contact was with the Pidgeverse, vs. the Zombieverse or the Anthropomorphicverse or the Jason-with-a-beard-verse …

I recall she was also irritated by the “love interest” subplot the network insisted on putting in.

I remembered that but couldn’t find a link to it on the forums. That’s still probably there, but Brianna Quill’s CIA lover-bodyguard probably gets excised from the cartoon, to be replaced with a teenaged and frequently shirtless Karate champion named Jesse Byrne as “protector” for Medea. She’ll of course criticize him for using so much violence, but it always turns out to be the right move.

“What about making Amir the love interest?” one somewhat progressive exec asks, only to face a sea of frowning white faces who just say something about “our demographics”. So yeah, long conversations and angst probably would result from taking this plot at all seriously.

The software I have won’t do a funny-animals comic strip, nor give characters actual beards, so we won’t be seeing some of these other universes any time soon.

I’m much less of a fan of the Marvel-Zombies type concept than some, and I’d already done a bit of short fiction about a high-fantasy version of the Menagerie (complete with Leo as wizard, creating golems from his own soul).

I think it was in or around the forum post I linked to above (which was what reminded me).

That is highly disturbing, and not something to mention to Alycia

Since the girlfriend always finds out anyway… 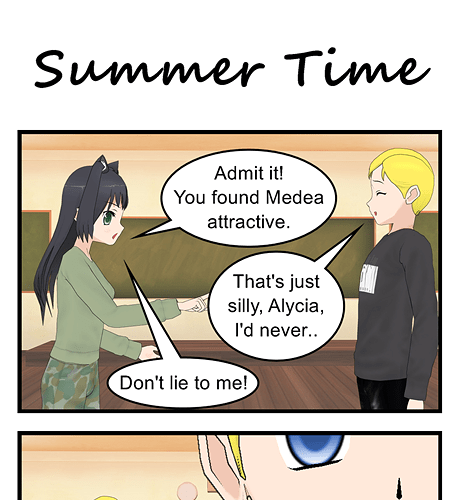 Jason’s rather complicated conscience explains a lot about him. (At least they don’t look like his dad.)

And even if it was all a setup for Alycia’s punchline, it’s still perfect. 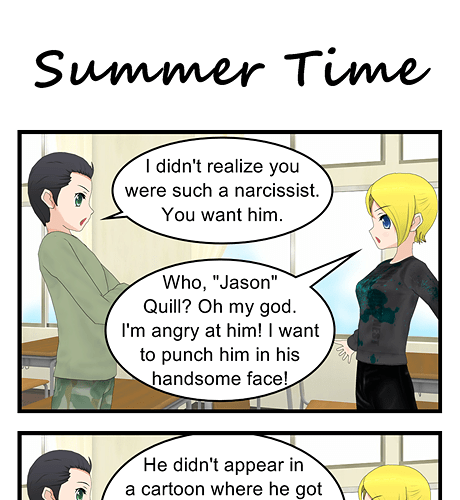 I’m doing this one mostly for the “he had a dad, he’s so lucky” thing. IF ONLY YOU KNEW.

The grass is always greener on the other side of the dimensional barrier.