To me this is […] a problem with the wording of Honor-Bound, and I wish the game designers had given this more thought.

Yes. This hits the problem on the head, because the wording of the Honor-bound threat in the Organization is not written very thoughtfully in terms of how it interacts with the available moves in the system [^1]

Now, I’m not going to try to rewrite basic moves. No thanks. Also, as Dave pointed out, filddly close-readings of the basic moves is likely to lead to a lot of over-thinking and frustration in the long run.

But I can rewrite poorly written threats all I like.

In general, this isn’t so much bad as just… lazy. The author knew what they meant so they didn’t bother with making better word choices. That’s mostly a problem with For My Honor and Mercy, from my take. Unrelenting is clear enough, but still doesn’t show enough thinking about stat-miscibility on the part of the designer.

Also the basic-concept-as-presented - unassailable person who can’t be meaningfully affected… until you find the auto-win button hidden behind For My Honor or piss them off with a three-card-monty scam - is less interesting to me than what I want.

So I’m going to take a shot at remaking the Threat into something I like better for the game.

Siflae the Honor-Bound: The most noble of the overlord’s servants, they have a strict moral code they will not break. This code grants them unbelievable strength (as does a thousand years of combat).

For My Honor: The Honor-Bound cannot be defeated in combat, by spell or arrow or blade.

Mercy: The Honor-Bound will always show mercy and compassion, even to their enemies.

[^1]: I have other thoughts on the basic moves available in the system (and the stuff that isn’t), which I’ll probably get into in some other post.

And hey, if anyone else wants to take a shot at a rewritten version, have at it. Designing threats is actually kind of fun.

My version is probably kind of hand-hold-y and spells out various options with a lot of specificity but… well, I’ve tried to introduce four different as-written threats from the book so far, and none of them have gone at-all smoothly, so… yeah. I feel it’s needed.

When I first saw the Honor-Bound, I felt the problem was that it diminished the villain. It felt like a better version might look like this:

You cannot be defeated or Taken Out until your commitment to your code is challenged.

What’s the difference? If someone violates their code, this triggers. But it also triggers if they don’t work sufficiently hard to uphold it - or crucially, if someone else demonstrates a stronger commitment to their own code, for example. Examples on the way when I have more time.

Examples on the way when I have more time.

This sounds cool and I’m definitely interested in it.

I have other thoughts on the basic moves available in the system (and the stuff that isn’t), which I’ll probably get into in some other post.

I have my own thoughts on this, but I don’t want to derail this thread. Expect me the write something on this later.

As for what’s presented in the book, I think For My Honor works… depending on what the code is. I will present the oddest example of the Honor-bound I can think of… 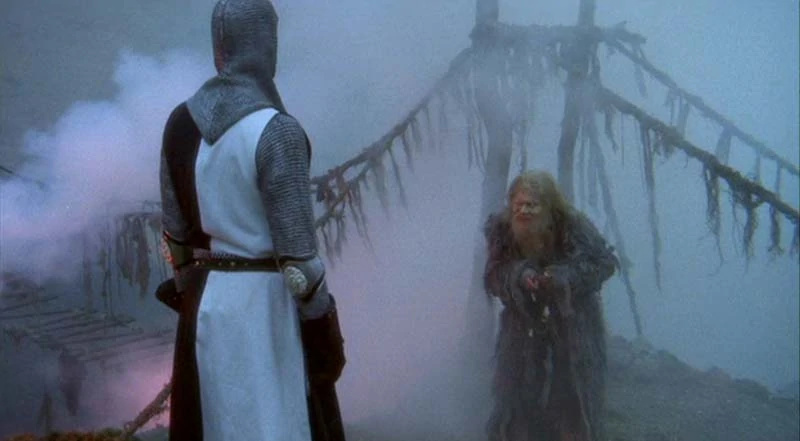 Let’s break this down for a second… they have a code to let no one pass the bridge unless they can answer their questions. They cannot be defeated by force of arms. Only when they are tricked do they become vulnerable and one cannot say that they were defeated, only removed from the scene.

The perfect example? Probably not, but it works for this example.

Okay. To illustrate how a hero, a villain, and a code of honor can interact in different ways, here’s some touchstones I personally have.

“You have to shoot”. With these words, Spock broke Valeris, establishing that she’d have to overcome her Bond with him as her mentor to uphold her code. This feels like a straightforward compromise of a code - but it had a lot of lead-up, permitting that moment to have the power it has.

“I’ll do it”. Sometimes the code is what defeats the villain, not the hero’s brawn or brains.

More from FFXIV - Thancred vs. Ran’jit. Both men are focused on Ryne, the young girl who’s the latest reincarnation of the Oracle of Light. Both have sworn to protect her. Where they differ is in what “protect” means. Ran’jit, the villain here, wants to lock her away and keep her “safe”, no matter what she wants. Thancred wants to atone for his past actions toward her (he was emotionally distant, due to his love for the woman who was the first incarnation of the Oracle). Both are following some kind of Code - but it’s Thancred who shows more dedication to his cause, who knows his version of that code is the right one, and that buys him victory.

These examples all have a few things in common.

If Doyce believes there’s meaningful things we can do against our current opponents without change, I’m happy to see where that goes, and not muck around with the stats as written. But if presented with the challenge of “design an adversary with a code of honor”, I’d keep these things in mind.